Vatic Note:   Well, finally, something is happening with respect to the "soft kill" war going on against the global citizens of this planet.  Do not kid yourselves, that is exactly what this is.... A WAR against the people in line with the GEORGIA GUIDESTONES put up AND PAID FOR in the 1970's by the "LUCIFERIAN SOCIETY".   These are ZIONIST SATANISTS WHO WANT THIS NWO.

They always tell us in advance what they intend to do to us, and if we do nothing about it after they tell us, then the responsibility for it, shifts from them to us.  Its a tacit approval, if we do nothing, for them to continue conducting war against us.  They are so CHICKEN .... COWARDS, that they can't conduct war out in the open with real hard kill weapons because they might get beat.   They want an unethical war of hidden soft kill weapons, so they will survive unharmed.  COWARDS and unethical evil satanic devils.

We should have known that, when they were attacking little children, pregnant mothers and old people, with no compassion, humanity or ethics, WE SAW THAT IN ISRAEL AGAINST THE PALESTINIANS. That is how I knew these khazar zionists were running homeland security.

We did a blog proving that The DHS ordered TARGETS FOR THE EMPLOYEES WITH PHOTOS OF CHILDREN, PREGNANT WOMEN, AND OLD PEOPLE ON THE TARGETS IN ORDER TO DESENSITIZE THEIR EMPLOYEES, IN SHOOTING UNARMED CIVILIANS and THE AMMO THEY ORDERED WAS HOLLOW POINT BULLETS.  now just how cruel can you be, murdering a pregnant woman with hollow point bullets.  THESE PEOPLE ARE INSANE AND NEED TO BE INSTITUTIONALIZED.

I can't imagine the kinds of internal lives these animals must live, when one has no soul, no humanity, no creativity, and no feelings of any kind.   What a barren, empty type of existance.  I guess that is why they have to use pornography all the time just to be able to have a temporary unsatisfactory experience of "feeling' something.  Sad, and pathetic, but more importantly,  DANGEROUS.

Small Victory As Monsanto Forced to Pay Fine Over This Controversial Practice
http://survivaljoe.net/blog/small-victory-as-monsanto-forced-to-pay-fine-over-this-controversial-practice/ 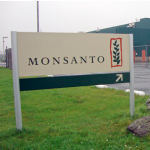 It’s easy to see why most Americans hate Monsanto.

Heck, most of the world hates the company as their devious business practices are often followed up by bullying and intimidation.

But there is good news concerning Monsanto.

Courts are sticking it to the biotech firm and are refusing to let them get away with their criminal misconduct.

In a recent court ruling they were forced to pay an additional fine for contaminating wheat supplies.


After paying an original sum of $2.4 million to reimburse farmers for contaminating their fields with genetically modified wheat that had not even yet been approved for farming, Monsanto has been forced to pay another $350,000 in order to settle a class action lawsuit brought upon by numerous farmers from over seven different states.

The news comes amid economic struggles for the biotech juggernaut that have resulted in the loss of share value and poor projections for the long term future. In last year’s fourth quarter, Monsanto reported a loss of $156 million.

And for the multi-billion dollar company, it’s not about the monetary figure, but the future of its genetically modified creations that the public just simply isn’t buying.

In the latest legal settlement, we find that Monsanto’s new method of simply paying off farmers just isn’t going to cut it when it comes to international trade. Following the news that GMO wheat had contaminated nearby wheat supplies, Japan and South Korea suspended a number of wheat orders from the United States — a blow towards the national economy in full thanks to Monsanto.

Meanwhile, the EU also had enough, and announced it would be enacting much more serious testing in its wheat shipments to ensure that they are GMO-free. As for Monsanto in the United States?

There will be no more rigorous testing or suspension of wheat supply. Instead, the company simply has to pay off the farmers that were affected (and potentially devastated) by the genetic contamination.
As NBC News reports:


“Genetically-modified food giant Monsanto said it will pay about $350,000 to settle class action lawsuits brought by farmers in seven states over tainted wheat. It will also reimburse the plaintiffs’ and their lawyers for a portion of the costs associated with the case. The company said that under the terms of the settlement agreement it can’t disclose how much that will cost.

The lawsuits relate to the discovery of genetically modified wheat on a farm in Oregon in May 2013. The wheat had not been approved, and after the discovery, Japan and South Korea temporarily suspended some wheat orders. The European Union called for tougher testing of shipments from the U.S.”

And remember, this is after the company paid out $2.4 million to settle with farmers in the Pacific Northwest for the same contamination style problem. The result? People around the globe are beginning to realize the brutal truth about Monsanto.

Nations around the world are taking a stand against Monsanto, with Germany and others now pushing GMO bans before the next harvest. In the US, the fight is also ramping up. As states like Maine introduce legislation to take immediate action against GMOs, it becomes abundantly clear that the 96% of US citizens who say they are in favor of GMO labeling may finally get what they have been asking for.

(VN: Vermont actually banned GMO's in the state as did certain counties in California,  and its been affecting their profits, which are taking a huge dump right now.  Bill Gates deserves it for being such a nasty piece of satanic evil, with his vaccines on young girls to make them sterile after he has had his kids.  He is totally and irretrievably insane. He is clearly one of the snake people as is his wife, who goes along with the entire agenda.  But then psychopaths are like that, aren't they?)

Let’s just call it as we see it.

When a company is repeatedly convicted of unethical business practices, buys one of the world’s most notorious private security firms (Blackwater), and spends millions to defeat GMO labelling legislation — it’s safe to say they have something to hide.

And with more and more independent research coming out that shows how problematic GMOs can be, is it any wonder Monsanto is on its heels all over the world?

Tell us what you think, were these fines enough?

Or should Monsanto have to pay even more?  (VN: MUCH MORE!!!!!!!)
The article is reproduced in accordance with Section 107 of title 17 of the Copyright Law of the United States relating to fair-use and is for the purposes of criticism, comment, news reporting, teaching, scholarship, and research.
Posted by Vatic Master at 1:30 AM