Vatic Note:   The first inclination I had after reading this and who the geneticist was, is that this answer below must be a benefit to the globalists, since Stanford is an elitist institution.   Remember, we covered that in a blog on the Tavistock group in Britain and how they do mind control and psy-ops for mass population control through mind control. Stanford was one of the institutions they hired to study such mass manipulations.  They should have reported them and helped to secure their removal from this country and ensure no one else did the study.

Further, Stanford hired Donald Rumsfeld after his tenure with the Bush administration Presidency.  He was the Sec of Defence when that 2.7 Trillion dollars went missing out of the Pentagon.... and he was head of the military when those passenger planes crashed into the twin towers. So, for what purpose did they hire someone with no experience in University teaching, and with no credentials or experience in doing so???  It had to be for other reasons.

Why do I bring this up?  Because what he publishes below directs us completely away from the possibility that the origins of those blue eyes were aliens.  Since the Nazarenes were Blonde haired and Blue eyed, and were not originally from Africa, or from Europe,  then where were they from?

He is trying to push us toward a mutation which would not explain why these evil ones are tracking RH negs?  But if they were of alien origins, or offspring of Jesus, that would explain the tracking and the attacks on the Aryans who are blonde hair and blue eyed.  We did a blog on the fact that mutation could not be the real cause or origins of RH blood

And they also had RH neg blood, WHICH IS FOUND NO WHERE IN NATURE, and a neg blooded woman's body treats the blood of her RH positive fetus as an ALIEN INVASION OF HER BODY, and tries to kill it off.   Also the first born of such a union, is usually sterile.  Same with a mule that is the result of two different species mating.  What is even more interesting, this does not happen with a Positive woman mated with an RH neg man.  How come???  And RH + is found every where in nature.  Solve the problem and you have your answer.

Given how these evil ones are acting about RH negs and the fact they have gutted the biggest blog we ever did on this subject with thousands of hits and hundreds of comments, AND they did it twice and now we are on our third time with it up and we are still getting thousands of hits and hundreds of comments. So you can see they know something about us that we don't know and they ARE AFRAID OF WHATEVER IT IS THEY KNOW.  So we need to find out and use it against them.

Is everyone with blue eyes related? How was that trait passed on?
-An undergraduate from California
August 9, 2013 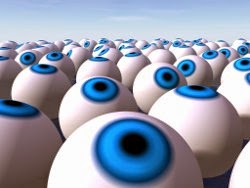 Surprisingly it does appear that most Europeans with blue eyes are pretty closely related.  Scientists can tell this by looking at their DNA.

One piece of evidence is that most blue eyed Europeans share the exact same DNA difference that causes their blue eyes.  Given that there are lots of ways to get blue eyes, this suggests that the people who share this DNA difference all came from the same original ancestor (or founder).  By studying the DNA in a bit more detail, scientists have concluded that this original blue-eyed ancestor probably lived around 6,000-10,000 years ago.

It is important to note here that not everyone with the same trait is necessarily so closely related.  For example, red haired Europeans get their red hair from a variety of DNA differences.  Not all redheads can trace their history back to an original red haired ancestor.

Now the fact that blue eyes appeared out of nowhere isn’t that weird…our DNA is much less stable than a lot of people think.  Changes in DNA (or mutations) can and do happen all the time so it isn’t surprising that occasionally one will happen in just the right place to cause blue eyes.  This probably happened a number of times throughout human history.

No the weird part is that the blue eye mutation from that original ancestor took hold and spread through Europe.  Usually this means that the mutation had to have an advantage.  If it didn’t, then like most neutral mutations, it would stay at some low level or disappear entirely.  But it is obviously still around and going strong.

You may have noted that I said that mutations “usually” spread because of an advantage.  The reason I had to add that qualifier is that sometimes a trait spreads in a population for different reasons, often having to do with luck.
Imagine a mutation that leads to blue eyes appears in an ancestor.  The blue eyes freak out everyone in the village so this person is banished to an island along with anyone else that villagers might be weirded out by.

Now something happens and everyone in the world is wiped out except the people on the island.  Blue eyes will have gone from very rare to very common.  And as these islanders repopulate the world, blue eyes will stay common.  This kind of thing is more common than you might think and there are many examples of this sort of founder effect.

And this isn’t the only way that chance might increase a trait.  Click here to learn about a few others.

While these are possible for other traits, it doesn’t look like this is what is going on for blue eyes.  By looking at the DNA around the blue eye mutation, scientists can see that blue eyes have been strongly selected for.  In other words, they had some sort of advantage. (This is another piece of evidence that blue eyes came from a single common ancestor.)

Now the tricky part is coming up with that advantage.  Scientists have proposed a couple of possibilities (neither proved).

This is one of the major ways that certain gene versions like blue eyes can spread through a population.  Blue eyed people have more kids and their blue eyed kids have more kids.  As blue eyes spread, so does the gene.

Usually when we think about an advantage of a trait, we think about something that makes an individual survive better.  Maybe lighter skin lets them deal better with weak sunlight or being able to drink milk lets them survive harsh winters better.  But not all advantages are like these.

Remember that the key to a trait becoming more common over time is that those with the trait have more kids.  Being a better survivor is one way to accomplish this.  But so is being sexy.

If you are more attractive to the opposite sex, chances are you’ll attract more mates.  This “sexual selection” is the idea behind a peacock’s ridiculous tail feathers.  And may be why blue eyes spread so rapidly.

It may be that the people who spread across Europe thousands of years ago found blue eyes irresistible.  The blue-eyed Casanovas had lots of partners, many of whom ended up carrying their children (who all had at least one copy of the blue eye color gene).   And blue eyed women always had their pick of potential mates (and often chose the blue-eyed ones).

This is a fun theory but we really don’t have any proof.  We can’t go back in time and ask these folks if they prefer blue eyed mates to brown eyed ones. If this is why blue eyes spread, we may never have a way of proving it.

When humans first ventured into northern Europe, most were in for a rude shock.  Their dark skin was causing them to develop an awful disease called rickets.

Back before fortified milk and vitamin supplements, we got most of our vitamin D from the sun.  In most parts of the world, sunlight is strong and frequent enough that people can get plenty of it even with dark skin.  In fact, given the dangers of the UV light from the sun, dark skin was actually selected for in these sunny places.

But then a few humans moved to Europe with its short, cold winter days.  They had to cover up to keep warm and the sun was hardly out much anyway.  The end result was that with dark skin, they simply could not get enough sun to get enough vitamin D.

There were a few lucky individuals who had the lighter skin they needed to get their vitamin D way up North.  They did better and had more kids.  Over time, fair skin became very common in northern Europeans.

One idea is that blue eyes and fair skin sometimes come from the same piece of DNA.  If this were the case, then blue eyes would just be a trait that hitchhiked along with the more useful light skin.

This is another good theory but so far scientists haven't been able to prove it.  The DNA difference that is the most common cause of blue eyes does make skin lighter but it isn’t the major reason some Europeans have such pale skin.

So right now we don’t know why blue eyes spread so far and wide across Europe.  We have some good ideas but no proof yet.  And it may remain a mystery for a very long time.

Back to Eye Color
The article is reproduced in accordance with Section 107 of title 17 of the Copyright Law of the United States relating to fair-use and is for the purposes of criticism, comment, news reporting, teaching, scholarship, and research.
Posted by Vatic Master at 1:00 AM