A Torture Cover-Up: Moazzam Begg’s arrest by the British

Vatic Note:   The below, highlights just how far down, the khazar infiltrated Governments of both the USA and Britain have come, under the guiding hand of these bankers.  Never before would we have tolerated torture as something  we would do to anyone and now today, we have accepted it  as a legit function of our governments.   That is the true indictment of our time and against our two nations, that will have to be addressed when all this comes down.

Any nation globally whose system has been touched by these Ashkenazi khazars begins to resemble the animal barbaric Israel as its now called.  Its worse than anything I have seen in my lifetime.   Both my World war II parents who served in the military would be turning over in their gaves by now from what has resulted from their sacrifices and efforts.  This is NOT what they signed up to fight and risk their lives for.  They  fought for an ideal that is being shredded to bits before our very eyes.

What we stand for as a civilization and a nation is reflected in our treatment of our elderly, our handicapped, and how  we treat others who are prisoners of war.  We all know, that currently, the only "TERRORISTS" on this planet as we speak are the khazar zionist bankers and their footstool, Israel.  They are also the ones labeling anyone who stands in their way of their global domination plans, TERRORISTS, and totally without justification .

Even Bush Jr's people made the unequivacal statement that many of the prisoners being tortured were innocent of any wrong doing.  Why didn't this stop when Obama was elected?  Because Obama, like Bush is not in control of this government, rather its the dual Israeli citizens working for the international terrorists from the illuminati and Rothschild banker families.

We have had a coup and we had better begin to decide how we intend to take this nation back and become what we once were..... a beacon of light with respect to freedom for all nations "citizens".   We have lost that mantel and rightly so for not fighting  back when we could.

Finally, DON'T GET ME STARTED ON THE BRITISH, who are even worse than Israel and that is hard to do.  Just read below how they are literally torturing these people to death for their stand for their nation. Is that what they intend for us when we lose WW III as planned? 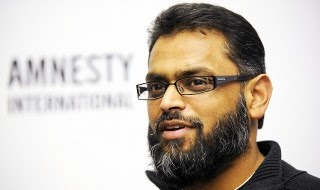 Moazzam Begg is one of the greatest human rights heroes of our time. Framed on bogus terror charges after the 9/11 false flag operation, Moazzam Begg was finally deemed innocent and released…but not before enduring three years of torture in Bagram and Guantanamo.

Begg witnessed fellow detainees being beaten to death by US soldiers. He witnessed the unimaginably brutal rape and torture of Aafia Siddiqui, another innocent Muslim caught up in the post-9/11 witch-hunt. After his release, Begg wrote a gripping account of his experiences, Enemy Combatant, and worked with the close-Guantanamo activist website CagePrisoners. I have interviewed Begg and his colleague Andy Worthington several times on my Truth Jihad Radio show.

Now Moazzam Begg is back in a cage. The British government is charging him with supporting “terrorists” in Syria.

The irony is that it is the British and American governments, and their Saudi and Israeli proxies, who are supporting the worst Syrian terrorists, the takfiris, along with the other “Syrian rebels.” Obviously there is more to Begg’s arrest than meets the eye.

Glen Greenwald has just published an excellent article: “The Moazzam Begg Arrest:  Part of the Effort to Criminalize Muslim Political Dissent.” Greenwald makes a strong case in support of the obvious: Moazzam Begg is being locked up because he is a political dissident, not because he committed any actual crimes.

Begg’s worst “crime”: He has exposed the US and British regimes as torturers.
When US authorities released Begg from Guantanamo, they probably hoped he wouldn’t blow the whistle on the torture he witnessed there and at Bagram. Begg’s powerful, articulate book Enemy Combatant, published in 2006, was their worst nightmare come true.

More recently, Moazzam Begg has been exposing the British government as a gang of torturers. His trips to Syria were journalistic expeditions intended to gather proof that the British and US governments have paid the Syrian government to torture war-on-terror detainees.

Begg hasn’t been to Syria since 2012. Greenwald points out:

“While the timing of his arrest makes little evident sense from a national security perspective, it does appear to correspond remarkably to his advocacy work. Cageprisoners’s media officer, Cerie Bullivant, yesterday noted: ‘Moazzam has been very open about his international travel and his objectives, including importantly exposing British complicity in rendition and torture. …[T]he timing [of his arrest] coincides with the planned release of a CAGE report on Syria and a major news piece that was due to be televised soon.’”  (VN: and the British want to rule the world and get their empire back??? Never.... they are closet Khazars.... never will happen.)

So Begg is now locked up in a cage because he is a Muslim human rights advocate. His incarceration is a tribute to his effectiveness.

I am not a fan of the Syrian rebels. They are strategic idiots, and some of them are takfiri lunatics. They have fallen for a Zionist plot to destabilize Syria.
But I am also not a fan of the Syrian government taking money from the US and Britain to torture innocent people. Moazzam Begg is to be commended for exposing these crimes.

Demonstrations are now being held across Britain calling for the immediate release of Moazzam Begg. I wish I could join them.

The views expressed herein are the views of the author exclusively and not necessarily the views of VT or any other VT authors, affiliates, advertisers, sponsors or partners. Legal Notice

Posted by Kevin Barrett on Mar 3 2014, With 613 Reads, Filed under 9/11, Editor. You can follow any responses to this entry through the RSS 2.0. You can leave a response or trackback to this entry

© 2014 Veterans Today. All Rights Reserved. Veterans Today Network - Log in - - Mobile Site
The article is reproduced in accordance with Section 107 of title 17 of the Copyright Law of the United States relating to fair-use and is for the purposes of criticism, comment, news reporting, teaching, scholarship, and research.
Posted by Vatic Master at 1:00 AM