*** - fundraising -  our balance for the deficit is reduced to $215.00 and we still have 7 days to go, so if you benefit in anyway from our work, AND can afford it, please Donate off to the right of the blog at the pay pal button.   We are half way there which will allow us to continue with this work, so please consider donating to the cause.

I believe we have the best readers in the world, as they are very much supportive of this blog both in donations and in contributions on subject matter and pointing out rabbit holes that we can go down. For that, we are eternally grateful and wish you many blessings and joys in your life.  We "WILL" prevail.

As you can see we are still quite a ways away from what will be required to deliver on the first.  As I said, this fundraising is getting harder and harder to do, due to the harassment by the powers that be. Please prove to them their efforts in such hinderings is useless, by donating off to the right.   Thanks and God bless you all for  your support.

Vatic Note:  What we have seen is clear and compelling evidence that Israel has committed a war crime and crime against humanity and she needs to be taken down by the U N if they  are going to be considered anything more than Britain, Rothschild/Israel's puppet.   Now the UN gets to decide just how far she is willing to go to prove she is a viable global objective body for global monitoring, and enforcer of international law.  If she does nothing, then we know and we might as well disband her right after we disban the failed state of Israel, the number 1 war criminal on the planet.   Then the UN is useless as anything other than a series of photo ops.

The nuke technology Israel has and their willingness to use it when the other side has none, proves why Iran may well have thought she needed to arm herself against Israel.  We now know who the true villian and enemy of the people are.  The international bankers and Israel. She murdered innocent Syrian civilians and unarmed children and babies.  Slime ball.  She needs to be dismantled as a nation.  She is just too damn dangerous to be left to her own devices.  And the UN right behind her.

Confirmed? Syria Has Been Nuked 4 Times Now.
http://beforeitsnews.com/war-and-conflict/2013/08/confirmed-syria-has-been-nuked-4-times-now-2447718.html
by Leda Ohio9,  Before It's news

20kt is small!
This is the estimated destruction if 20kt were dropped on NYC
(Interactive Nuke Bomb Map Here)

It seems very clear to me that…
Syria has now been attacked with at least 4 tactical nuclear weapons.

It is awfully ironic that an inhuman weapon such as nuclear weapons and chemical weapons could be used to
promote human rights and freedom in the world.

on August 05, 2013, and has since been removed. A copy can still be found at Google Cache – and has been recovered and archived below. The fight against Assad’s brutal regime has taken an unexpected turn late Thursday afternoon when a large weapons cache belonging to the so-called national protection force in Homs city, an arm of Assad’s Shabeeha, was destroyed.

The explosion was reminiscent of the attack on Qasyoon mountain, a stronghold for the Syrian army and a location said to house missiles targeting Israel.
It was first reported that the missile fueling station had blown up which seemed like a reasonable proposition especially since an ammunition depot was targeted.

But the two explosions in Homs and Qasyoon share the same property: They are both above ground air bursts according to Greg Thielmann, an expert on arms control policy whom I spoke with on Saturday at great length. I was first alerted to the connection by slow twitter chatter right after the bombing in Homs. 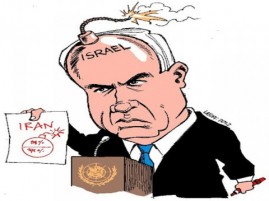 (VN: Netanyahu to Obama, Boomberg, and other neocon/neolibs:   "Here, let me show you how its done"!!)