A Vatic Analysis - "Is the USA the NWO designated losers of WW III?"

Vatic Note: This is a commentary we have done based on this article that set us off: For some reason it became clear that the end is near and now its up to us how this all ends. It really is. I deeply believe they are in trouble and things are not going as planned.  We have a lot of contemplating to do about our course of action between now and the time they use these WEAPONS OF MASS DESTRUCTION TO FINISH OFF WHAT THEY STARTED, WHICH IS THE DESTRUCTION OF THE UNITED STATES OF AMERICA. I don't know about you, but I do not want to be the generation that lost what so many good ancestors of ours died to give us and preserve for us over these many hundreds of years. As Kristen Branch would say "REMEMBER WHO WE ARE"!

A Vatic Analysis - Russian journalist: ‘USA is the real empire of evil’ - http://www.eutimes.net/2011/04/russian-journalist-usa-is-the-real-empire-of-evil/
Posted by EU Times on Apr 16th, 2011 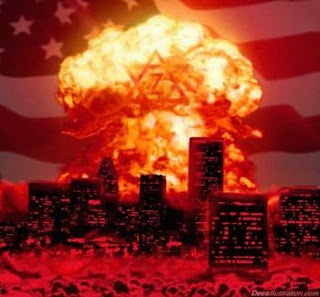 Notice, ITS BEGUN, the vilification of America as the evil empire. Remember, the only way the Khazar Zionists were ever going to bring us down was by nuking us to death. Why? BECAUSE WE, THE "PEOPLE" OF THE US WERE THE BIGGEST OBSTACLE TO THEIR INTERNATIONAL FASCIST BANKING GLOBAL EMPIRE BUILDING. So, in order to complete their agenda they had to HAVE US LOSE A THIRD WORLD WAR, so badly that we would never be able to get up again. Then, LIKE THE GERMANS AFTER WORLD WAR II, WE WOULD BE PUT INTO INTERNMENT CAMPS (ALREADY IN PLACE) AND "RE-EDUCATED" OR "RETIRED" IN THE MILLIONS, IF UNABLE TO RE-EDUCATE US, THEN ALL RESISTANCE WOULD BE CRUSHED.

Depopulation would take place as they have done in Bosnia, Iraq, Afghanistan and soon elsewhere through radiation and the massive pedophiling of those nations children. Notice this has been going on in Israel for the past decade where their sperm count has dropped 40% IN UNDER A DECADE, not to mention the record levels of Breast cancer the Khazars have visited upon the Jewish women there at a rate higher than that in Europe for a much much smaller population,  which is a genocide of sorts of the real Jewish people since this is being done by genotype as outlined in the PAX AMERICANA PAPER, WRITTEN BY CHENEY, JEB BUSH, KRISTOL, PERLE, WOLFOLWITZ, AND OTHER NEOCONS. This is a CLASS WAR, NOT ONE NATION AGAINST ANOTHER BUT ONE CLASS AGAINST ANOTHER. Further,  they are getting as ripped off as we are.

Ask yourself, why is our navy down to the very minimal needed to constitute a navy? Here is a partial comment from a Naval man about the condition of our military....in case of a WW III situation they have planned......  "A word from Captain James A.Kenney, U.S. Navy (retired).      Captain, this is to ensure that when the balloon goes up on the big one, WWIII, the U.S. Navy will cease to exist as an effective military force.  That also goes for the Army, Marines, and Air Force.   Can anyone guess why???"

Why are our soldiers being driven into the ground and why are MOSSAD AND THE CIA PAYING THE TALIBAN TO KILL AND MAIM OUR SOLDIERS?

WHY IS THE MILITARY DRUGGING AND SUICIDING OUR SOLDIERS IN RECORD NUMBERS?

Why did CHENEY ORDER ILLEGAL NUKES TO BE LOADED INTO ILLEGAL CARRIERS AND THEN ANNOUNCE THEIR DISAPPEARANCE as a theft AND THEN KILL ALL SOLDIERS INVOLVED IN THE LOADING OF THOSE NUKES??

BECAUSE CHERTOFF AND PAULSON TOLD HIM TO in order for Mossad to USE THEM, WHEN THE TIME WAS RIPE, FOR THE BOGUS FALSE FLAG NUKE ATTACK ON OUR MAJOR CITIES BY THESE SAME ISRAELI KHAZARS "OR" the MADRID FAULT WITH 15 poorly maintained NUKE PLANTS ALONG THE FAULT. That is better yet for the khazars.  If you remember, these are the people who did 9-11, then its easy to see how they could do this to us in the future. Remember, these khazars hate Christians and Americans. The Christian part I know and understand (they are satanists,so it makes sense), but the American part, I do not know or understand.

That means seasoned fighting men who are vets LIVING IN THOSE NUKE DESIGNATED URBAN CENTERS would be wiped out in the millions THROUGH THOSE ATTACKS. The reason was to destroy and demolish our military domestically, so we would be defeatable.

However, in order to do that they must COLLECT THE GUNS FROM THE CITIZENS OR THIS NATION WOULD NEVER BE ABLE TO BE OCCUPIED SINCE THEY HAVE 10,000 CHINESE SOLDIERS WAITING, SITTING 60 miles OFF OUR BORDER, AND NOW WE KNOW WHY THEY WOULD NOT PUT UP THAT FENCE ALONG THE BORDER...... THEN THE CHINESE WOULD NOT BE ABLE TO INVADE US AS EASILY AS THEY NEEDED, AS PART OF THEIR AGREEMENT TO DO THIS. RUSSIA, THE SAME WAY.

Notice, if you studied history, this is exactly how Hitler, the puppet, got set up by the "Na" (German socialist party) + "ZI" (International Zionist party) NAZI'S to make Germany the bad guy in a world war. What is important at this point is that you REALIZE WHO IS BEHIND THE USA, MANIPULATING ALL THE BAD AND EVIL WE ARE DOING. Its not our mind controlled manchurian candidate either Bush nor Obama, rather, ITS THE INTERNATIONAL ROTHSCHILD KHAZAR BANKERS..... They control the top leadership in every major country, THROUGH BLACKMAIL, THREATS AGAINST THEIR LIVES, ASSASSINATIONS OF LEADERS (or attempted assassinations like they just tried to do to Merkle) RESULTING IN INTIMIDATION AGAINST OTHER LEADERS IN ORDER TO CONTROL THEM. THAT IS CALLED A COUP OF A COUNTRY, EVEN THOUGH ITS DONE IN A MANNER DIFFERENT THAN A TRADITIONAL INVASION AND TAKE OVER, RATHER DONE BY TREASON FROM WITHIN. THE END RESULT IS THE SAME.

WE FOUND THAT OUT IN THE MIDDLE EAST DIDN'T WE? Who controlled the rebel leaders of all those middle east countries AT THE SAME TIME THEY WERE CONTROLLING THE LEADERSHIP IN THOSE SAME COUNTRIES???? ROTHSCHILD'S ISRAEL!!! Then when their bogus rebellion was completed, the same zionists out of Israel representing the international bankers put the same people and part of the previous admin back into power Remember I said "ITS ARROGANCE TO THINK THEY WOULD NOT DO TO THE US WHAT THEY HAVE DONE TO ALL THESE MUSLIM COUNTRIES OR TO ALL THE THIRD WORLD COUNTRIES."

However, where we have a chance at stopping all this is IF, UNLIKE THE GERMAN PEOPLE, WE REFUSE TO COOPERATE, FIGHT, OR OTHERWISE SUPPORT THEIR BRUTAL ILLEGAL, AND NATION DESTROYING WARS KILLING OFF A MAJOR PORTION OF OUR CURRENT GENERATION OF CHILDREN AND WIPING OUT OUR WEALTH, THEN THEY HAVE A PROBLEM. WHAT IF WE DECIDE THE ONLY WAR WE WILL FIGHT WITH ALL OUR HEART, SOUL, PASSION, COMMITMENT, AND MIGHT IS THAT AGAINST THOSE DOING THIS, ORCHESTRATING, FUNDING, AND AUTHORIZING IT, "WE THE PEOPLE, DECLARE WAR ON THE INTERNATIONAL BANKERS EVERYWHERE", THAT WILL STOP IT. iF IT DOESN'T STOP IT, AT THE VERY LEAST IT WILL COST THEM AND THAT IS BETTER THAN THE FREE RIDE THEY HAVE GOTTEN OVER THE CENTURIES OF DOING THIS TO OTHERS, ETC....

The Khazars use other nations and religions and nationalities to act as fronts for them so they have no limits on the crimes they can commit in someone elses name and NEVER HAVE TO TAKE RESPONSIBILITY FOR THEIR BARBARISM.   Its way past time for them  to bow to the hand of justice and accountability.  The Rothschild Zionists control the top leadership of the UNITED STATES OF AMERICA, FRANCE, ISRAEL, (YES, EVEN THEM, WHO ARE BIGGER VICTIMS OF THE KHAZARS THAN WE ARE.) CHINA, RUSSIA, EGYPT, ITALY, THE VATICAN, DENMARK, BELGIUM, THE EU, NETHERLANDS, SWEDEN, GREECE, IRELAND, GREAT BRITAIN, ETC.....

Reminds you of our current banking system where the Khazar Banksters HAVE COMMITTED ATROCIOUS THEFTS, FELONY DRUG RUNNING, MONEY LAUNDERING, ASSASSINATIONS OF WHISTLEBLOWERS THAT THEY HAVE ADDED TO THEIR CRIMES, ETC AND NEVER HAVE TO PAY FOR IT, TERRORIST FALSE FLAG ATTACKS, and other power and wealth grabbing activities USING THE COUPED USA THROUGH SUCH MINIONS AS RAHM EMMANUAL, DICK CHENEY, ETC.... The puppet masters who handle and control the MANCHURIAN President, then Lieberscum, a dual Israeli citizen, as chair of key committee of the gestapo homeland security, Chertoff and Napolitano who are DUAL ISRAELI ROTHSCHILD CITIZENS, IN CONTROL OF HOMELAND "GESTAPO" SECURITY THAT IS NOW OFFICIALLY MANAGED BY THE ADL AND SPLC........ this is so obvious and blatant, its beyond belief that others in power cannot see this.

THIS MUST BE STOPPED AND IT CAN ONLY BE DONE BY US. TRY TO PICTURE EUROPE IMMEDIATELY AFTER WW II AND THE STARVATION, DEVASTATION, AND HORRORS THEY EXPERIENCED AT THE HANDS OF THESE KHAZAR INTERNATIONAL BANKERS, MILLIONS OF GERMANS WERE WIPED OFF THE FACE OF THE EARTH (WHICH YOU NEVER EVER HEAR ABOUT) AS A RESULT OF THAT WAR.....SAME WITH CHRISTIANS AND MUSLIMS IN RUSSIA IMMEDIATELY AFTER THE INTERNATIONAL ZIONIST ROTHSCHILD FINANCED THE RUSSIAN REVOLUTION. THAT, MY FELLOW AMERICANS, IS THE FUTURE THEY HAVE PLANNED FOR US, and those that are reeducated will be used as slaves to serve their masters or ranchers of cattle, which is us. Well, they can "PLAN" all they want but its going to cost them bigger than they want.  Remember, these are chickenhawks who only cause misery and death and never get to experience it themselves.  ITS PAST TIME.

Americans celebrated the justice meted out to the Germans at the Nuremberg trials and yet notice NOT A SINGLE KHAZAR WHO AIDED AND LEAD AND COORDINATED AND FINANCED ALL THE HORRORS DONE WERE PUNISHED OR EVEN ARRESTED OR TRIED. Our government knew these bankers were financing and aiding the enemy because they closed down one of the bankers businesses for doing so, yet did not prosecute them criminally as they would anyone else of lower stature.  This time, that must not happen. They must be held to a standard of Justice that can never be ignored again. Or this will continue until humanity is wiped off the face of this planet by these lizards.

JUSTICE AND KHARMA WILL BE AWARDED  TO THOSE DOING ALL THIS AND DONE AS MOST KHARMA IS DONE, by suffering that which one has promoted.  I can't even imagine what they will go through based on what "damage" they have done all these years.

Source
The article is reproduced in accordance with Section 107 of title 17 of the Copyright Law of the United States relating to fair-use and is for the purposes of criticism, comment, news reporting, teaching, scholarship, and research.
Posted by Vatic at 2:00 PM

A fantastic blog...
A souvenir of Portugal
Mário Nunes (http://kafekultura.blogspot.com)