Studies Show Diet Drinks Not Fit for Man Nor Beast

Vatic Note:  I bet it would be a good rabbit hole to go down to find out who sits on the Board of Directors for the Aspartame company?  Same with Coke and Pepsi who both use it in their soft drinks.   "THE REFRESHING DRINK THAT KILLS, 'SOMEWHAT' SLOWLY". 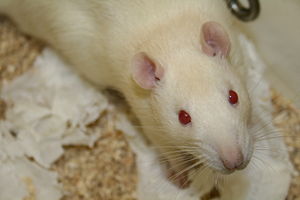 According to a 7 year study on Aspartame, a thirst for aspartame, the diet sweetener found in drinks like diet coke, can lead to certain cancers in rats.

....The research found that the sweetener was associated with unusually high rates of lymphomas, leukemias and other cancers in rats that had been given doses of it starting at what would be equivalent to four to five 20-ounce bottles of diet soda a day for a 150-pound person. The study, which involved 1,900 laboratory rats and cost $1 million, was conducted at the European Ramazzini Foundation of Oncology and Environmental Sciences, a nonprofit organization that studies cancer-causing substances; Dr. Soffritti is its scientific director....

...Dr. Soffritti, who has spent 28 years doing research on potential carcinogens, said he was trying to steer clear of the growing political maelstrom. But he added that he was concerned about the large numbers of people who use aspartame, particularly children and pregnant women. "If something is a carcinogen in animals," he said, "then it should not be added to food, especially if there are so many people that are going to be consuming it."....source: ny times

So you might think, what's the big deal? After all, you are not a rat.

As previously reported, aspartame was found to be associated with all manner of health problems.

...a research psychiatrist who found that aspartic acid, a primary ingredient in aspartame, caused holes to form in the brains of mice, the FDA decided to form its own internal task force to investigate the initial claims made by the Searle Co.

What the agency discovered was a series of falsified claims, compromised study results, and missing information. The claims made in favor of aspartame were so dubious and the evidence so faulty that the FDA decreed that a grand jury should investigate Searle Co.’s claims. Unfortunately, the case failed to move forward when U.S. Attorney Thomas Sullivan and Assistant U.S. Attorney William Conlon failed to initiate any legal action. Conlon was later hired by the law firm that represented Searle Co.

Investigation revealed that aspartame had caused tumors, seizures, brain holes, and death in many of the studies. All negative findings had been altered or scrubbed from the final reports delivered to the FDA when aspartame was first reviewed....source: natural society.com

Yet the FDA allowed the use of aspartame it any way. Some believe it was Donald Rumsfeld's political connections that got the product approved. But that is another story.

Another fairly recent study has shown that just drinking a couple of cans of diet soda is associated with kidney damage.

...Scientists from Brigham and Women’s Hospital in Boston have revealed results from a study outlining some of the effects of artificial sweeteners on the body. Conducted on a group of 3,000 women, the results indicated that those who drank two or more artificially-sweetened beverages a day doubled their risk of more-rapid-than-normal kidney function decline...source: natural society.com

So it might even be that the rats have a greater tolerance for diet sodas than people.   But no matter if you are a rat or a person, probably the best advice is to just stay away from the stuff.

See the Abstract Below on Dr. Morando Soffritti's study


...The Cesare Maltoni Cancer Research Center of the European Ramazzini Foundation has conducted a long-term bioassay on aspartame (APM), a widely used artificial sweetener. APM was administered with feed to 8-week-old Sprague-Dawley rats (100–150/sex/group), at concentrations of 100,000, 50,000, 10,000, 2,000, 400, 80, or 0 ppm. The treatment lasted until natural death, at which time all deceased animals underwent complete necropsy. Histopathologic evaluation of all pathologic lesions and of all organs and tissues collected was routinely performed on each animal of all experimental groups.

Thank you, Charles, do you have a link to your post on the subject? Our entire food supply handled and manufactured by food companies now fully owned by the Khazars is tainted with chemicals and health destroying ingredients. Just look at our children and the non food stuff they ingest. I can't even imagine what their livers will look like by the time they are 40, but then that is the objective isn't it?

Get rid of them when their productive years are over.