*** WE NEED SOME HELP THIS MONTH.  We were ok last month but this month is different.  I will be having major surgery on my jaw to remove bone from my gums, scheduled for May 28, so that means I will need help, since I will be in no condition to work to earn our deficit.  If you would consider helping this month, we would appreciate it.  AS  you know, our deficit is $350, but we have been able to knock that down this month to $250 for a one time experience and we will need it by the first of the month, so if you can afford it, please donate off to the right of this blog, at the pay pal button.  Next month,  IF we don't make it in healing by that time, then it will be back up to $350 for the month.

Thank you and God Bless you and yours for all your support and help in this time of need. If we wish to continue this effort on your behalf, then we will definitely need your support in the area of financing.  We also thank you for reading and distributing this blog all over the world.  It means we are educating and awakening like never before.  Its a wonderful thing to watch the awakening and the KNOWING of the sheep, that is going on.

Vatic Note:   Well, this will make the powers that be unhappy.  How can they control our water if we have this technology available at such a low tech and affordable cost?   I will wait to see just how far they are allowed to go with this.  If I were the PTB, I would be so frustrated by now.

These dumb goyim keep thwarting our efforts to take them over for their own good.  Well, Ok, so we can use them to generate wealth and let go of banking, which has been expensive and a pain to administer.  Here we are again, a nasty country like ours, helping out poor villages in India.

Out of "Service to others" comes a brand new technology.  Out of "caring", comes creativity, and out of that comes the service of fixing problems for those least able to do it for themselves while also providing a new technology for the world.  I guess we are not such bad guys after all.   The "real" bad guys are our foreign occupiers who do nothing out of caring or service to anyone but themselves.

Its why they lack serious creativity and fail in most attempted criminal endeavors, like taking over nations globally and being able to hang onto them.  They have tried globalizing for a thousand years now and have never been able to do it.  That is why I don't believe they will succeed this time either.   You can not change a pig into a peacock without some serious genetic work.

Water is collected from the desalination system that runs on solar energy. Photo: USAID

(SCMP) The American engineers who travelled to rural India two years ago believed they were going to help poor villagers get rid of microbes in their drinking water. But soon after their arrival, they began hearing about a different problem: salt.

“People kept talking about the salt in the water,” recalled Natasha Wright, a doctoral candidate who was part of the team from Massachusetts Institute of Technology that made the journey in 2013. “The groundwater beneath the villages was brackish.”

Those complaints inspired new technology that could some day supply water to thirsty villages and drought-stricken farms in other parts of the world. 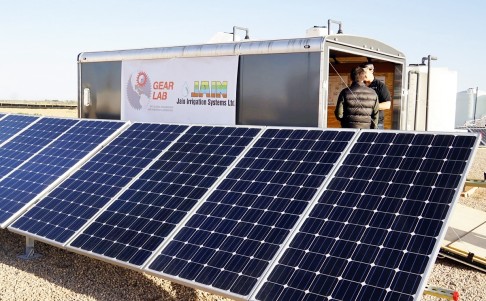 While there are dozens of different desalination systems in use around the world, MIT’s is uniquely designed to be small, relatively cheap and 100 per cent solar-powered, making it suitable for remote areas where the electricity supply is unreliable or non-existent, Wright said.

The panel of judges last month deemed the machine’s potential so impressive that they gave the inventors the US$140,000 “Desal Prize”, an award sponsored by Securing Water for Food, a joint project of the US Agency for International Development and the governments of Sweden and the Netherlands.

Some 68 engineering teams from 29 countries competed in the contest, hosted by the Interior Department’s Bureau of Reclamation.

Wright said she and fellow engineers from MIT’s Global Engineering and Research Laboratory became aware the extent of saltwater intrusion in northern and central Indian aquifers during visits to investigate solutions for widespread water contamination in India.

“People complained about the salty taste [of their water]and the salt ruined their cooking pots,” Wright said. 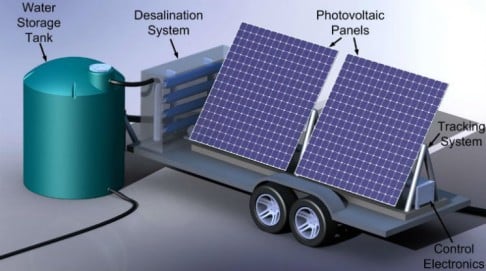 Illustration: Dr. Amy Bilton
Traditional desalination systems are expensive and require substantial amounts of electricity, making them impractical for India’s remote farming communities. Instead, the researchers designed a system that removes salt through a process called electrodialysis, using a series of electrodes and membranes.

They added solar panels and batteries to run the pumps and charge the electrodes. Then, in a final step, they installed ultraviolet light arrays to kill any microbes remaining in the water.

The finished prototype is small enough to fit in a tractor-trailer and includes photovoltaic cells to supply the electricity. The system, when fully operational, can supply the basic water needs of a village of between 2,000 and 5,000 people, MIT officials said.

Although the prototype was more expensive, Wright said the team hopes to lower the costs of a village-sized unit to about US$11,000.
Source: South China Morning Post