Australia: everybody must get vaccinated, except the Prime Minister’s daughters

Vatic Note:   This below is so very typical of the image the elite khazar zionists have of us compared to themselves.   This attitude is harkening back to the days of the dark ages, where royalty and the bankers saw us as nothing more than animals to serve their needs.

In those days it was called serfdom, when the average human animal cattle, was owned by the corporate elite and treated as such.  Now they are brooding over the lost of those days when everything was for them and their families, while the rest of us could simply disappear AFTER DOING OUR SLAVE LABOR and not show up again until called to serve them again, hand and foot.

Back then, they were the "beautiful{" people and we were the "filthy masses", who were used to help keep the elite beautiful.  What was neglected was the view of them from the inside, where all their darkness, evil, filth were gathered into one smelly pot and put out for all to suffer over.  So far, I don't know anyone
who intends to let their children grow up in such a criminal mafia, child endangered system.

Australia: everybody must get vaccinated, except the Prime Minister’s daughters
http://govtslaves.info/australia-everybody-must-get-vaccinated-except-the-prime-ministers-daughters/
Iron Sheik,  Govtslaves.info,  April 27, 2015 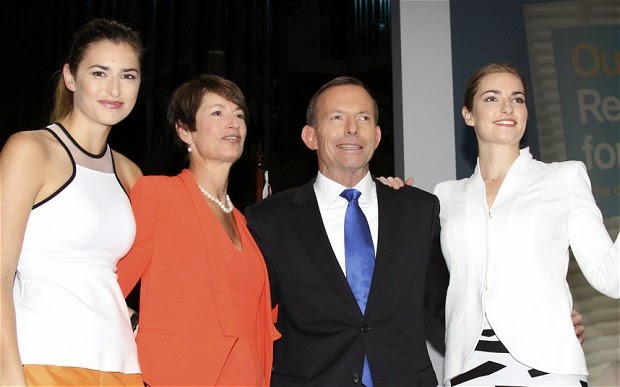 Australia: everybody must get vaccinated, except the Prime Minister’s daughters

Meet vaccine refuser, Australian Prime Minister Tony Abbott
We’re talking about Tony Abbott, who just ruled from on high that there are no more exemptions from vaccines in Australia.

No more conscientious objections, no more religious exemptions. Only the rare medical exemption, permitted by a doctor. And suddenly, every family who refuses vaccinations for their children will lose up to $15,000 per year, per child, in federal support money. Every family in Australia is eligible for federal money.
Tony has officially ripped away citizens’ right to choose. Australia is now officially a medical police state.
But…

Back in 2006, Tony was singing a very different tune concerning his own daughters.

On November 9, 2006, news.com.au had the story: “Abbott rules out cancer vaccine for his daughters”:

FEDERAL Health Minister [at the time] Tony Abbott has said that while he may be seen as a ‘cruel, callow, callous, heartless bastard’, he would not be rushing to have his own daughters vaccinated [with the HPV shot] against cervical cancer.

‘I won’t be rushing out to get my daughters vaccinated, maybe that’s because I’m a cruel, callow, callous, heartless bastard but, look, I won’t be,’ Mr Abbott said on Southern Cross radio.”

How interesting. How revealing. Tony Abbott, a vaccine refuser. Then. But now he’s the Pope of forced vaccinations for all Australians, whether they want them or not.

I don’t see Australian media outlets rushing to cover this contradiction. A reader pointed me to the 2006 article. Otherwise I never would have known about Tony’s double life.

Back in 2006, Tony had a bizarre justification for his anti-vaccine stance. The news.com.au article spells it out:

Tony: “If there is a national immunisation program [that includes the HPV shot], I certainly will be making sure that they [his daughters] get vaccinated under the program.”

Tony: “The [national] program is what the experts think clearly is absolutely necessary, and at the moment the experts don’t think this [HPV shot] is absolutely necessary.”
The article continues: “The PBAC [Pharmaceutical Benefits Advisory Committee] yesterday knocked back the application from Australian manufacturer CSL to make the Gardasil [HPV] vaccine available free to all females aged 12 to 26.
“Gardasil halts the spread of sexually-transmitted human papilloma virus (HPV), which causes 70 per cent of cervical cancers. At present it costs $460 for the recommended three doses."

“The PBAC said it made the decision because the vaccine program – which would have cost about $625 million during its first four years – was not value for money.”

Let me take this apart.

Tony was saying he wouldn’t have his daughters vaccinated with the HPV shot because there was no national program for it.

That’s like saying, “If the supermarket doesn’t sell cherries, I won’t let my daughters eat them.”

You see, the only reason a national program to vaccinate girls with the HPV shot wasn’t instituted, in 2006, was because of money. The cost vs. value of the program was determined to be “not worth it.”

Conventional researchers, doctors, and vaccine manufacturers in Australia were quite confident, in 2006, that the vaccine was safe and effective. Otherwise, they never would have considered it, in the first place, for the national vaccine program.

(As far I’m concerned, HPV is one of the most useless and dangerous vaccines in existence, but for the purposes of this argument, we’re talking about the conventional mainstream view.)

Tony was deciding to reject what he considered to be a safe and effective vaccine for his own daughters—for whatever bizarre reasons he cared to advance. Because he had the right to choose. And because he held a high post in government. And because he decided he could do whatever he wanted to do.

But now, flashing forward nine years, Tony is telling every person in Australia what they have to do. No choice. No freedom. No right to seek out information independently and make a decision based on that information.

Australia is a medical police state, with Tony, the old vaccine refuser, at the helm. If that isn’t cause for uproar in the Land Down Under, what is?

“Hi, I’m Tony. I’m your boss, your ruler, your King. What I say goes. For you. But not necessarily for me. That’s the way it works, don’t you know? The King makes rules for everyone else, but he can do what he damn well pleases. He’s above the rules. He’s different. He’s the Lord of the idiots and slaves, but he himself is free. That’s the deal. It’s none of your business. Just keep your eyes straight ahead and your mouths shut and march forward. That’s your fate. I so command it.”

Jon Rappoport is the author of two explosive collections, The Matrix Revealed and Exit From the Matrix, Jon was a candidate for a US Congressional seat in the 29th District of California. Nominated for a Pulitzer Prize, he has worked as an investigative reporter for 30 years, writing articles on politics, medicine, and health for CBS Healthwatch, LA Weekly, Spin Magazine, Stern, and other newspapers and magazines in the US and Europe. Jon has delivered lectures and seminars on global politics, health, logic, and creative power to audiences around the world. You can sign up for his free emails at www.nomorefakenews.com