China boasts more than 5,000 years of rich and beautiful civilization, crushed under the boot of Oppresion & Tyranny

*** VATIC ALERT: The Vatic Master is being interviewed tonight on the radio on a program called "The Truth Traveler," with Erin Dakins.
Please listen in since she is going to cover so much of what we have posted including RH Negative Blood.  There is a call in number for live phone calls, and you can listen at the phone number below, if you do not have access to the net and her site.

To Call the show LIVE:  1-855-660-4261
Listen via telephone:   1- 605-562-7770
The truth in all things...open your mind and explore reality as you never have before from deep inside the human mind to ancient technology and archaeology
that will shatter your preconceived beliefs and alter your awareness. Unearthing the truths that have been hidden from us will help us to
understand the present and prepare us for the future. Knowing there is vast knowledge that can transform our thoughts today and reshape
how we view the world around us is the focus of becoming fellow Truth Travelers.  Climb aboard, our destination...hidden knowledge.

***Fund raising - Until I can get that first pay check,  I am again asking you to donate to help meet the deficit of $85 by the first of the month. Like always, if we do not meet the deadline, we will have to give this up, since I can't afford to do both.  Thank you all who have contributed so far.  We are forever grateful for your support.

If you appreciate the work we do and it has been of benefit to you, then we ask that you help us out by donating at the Pay pal button off to the right of this blog.  Thank you for all your support and God Bless you and yours for this coming new Year.

Vatic Note:   Having had some exposure to previous Chinese History and Culture, this is pretty much true.  I don't believe it was just dance and song, it was the other gifts they had that no one else had or could do.
Once such example was working with Porcelain, which resulted in some of the most celebrated Vases and artifacts on the planet.   The Emperor also used music to see how his people were doing.

Periodically he would travel around the empire to check out the music and if it was not of the kind that promoted peace and tranquility he would make them change the music.  This part is hard to explain without going into enormous detail about music and its affect on humans.

Someday I will do a blog on that subject, then when you listen to the junk they are selling today you will see why the emperor was  so concerned about keeping all in good order.   The soul-less ones that are raping and pillaging our planet today are void of any capacity, not just desire, but total lack of capacity to enjoy, create, or support such human emotional artistic endeavors.

China boasts more than 5,000 years of rich and beautiful civilization, crushed under the boot of Oppresion & Tyranny
http://theunhivedmind.com/wordpress3/theatrical-production-reveals-timeless-quest-for-freedom-in-world-dominated-by-oppression/
By Admin,  the Unhived Mind,  January 5, 2015 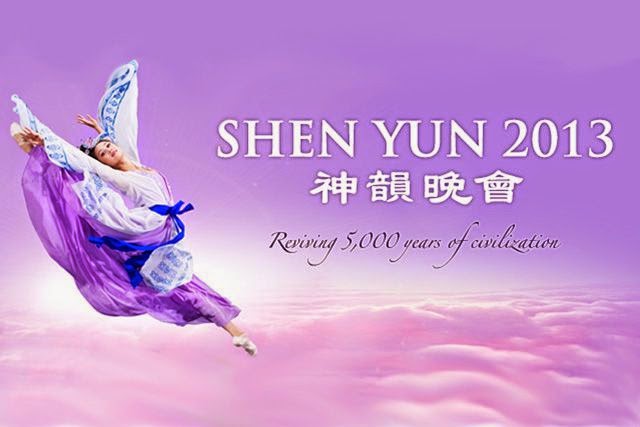 Throughout the ages, one constant and enduring theme is that human beings have had to remain vigilant in fighting to preserve their freedom. Cultural richness has always been a threat to totalitarian regimes, and many a culture has lost its bearings due to harsh government overreach and oppression.

This is definitely the case for modern-day China, which continues to suffer under the yoke of freedom-crushing communism. But it wasn’t always this way — China boasts more than 5,000 years of rich and beautiful civilization, much of which has been lost as a result of the heavy boot of tyranny.

But Shen Yun Performing Arts has revived much of China’s alluring history through amazing song and dance, with an impressive stage show that travels the globe in preservation of Chinese history. This spring, the Shen Yun 2015 World Tour will kick off, hitting more than 130 locations throughout North America, Europe, Australia, New Zealand and Asia.

Based on a tradition that dates back thousands of years, classical Chinese dance is at the forefront of what Shen Yun Performing Arts is all about. The movements are circular, graceful and filled with emotion. In fact, this unique dance form can only exist when one’s inner feelings are expressed as body motion.

“The movements of classical Chinese dance are rich in their ability to express a variety of feelings, be it happiness, sorrow, joy, anger, grief, delight, the emotions that come with parting and reuniting, insanity, infatuation, sickness, tipsiness, solemnity, ignobility, and majesty, as well as civil, military, and other personalities and stories,” reads a description of what the movements are meant to evoke written by Li Hongzhi.

This short video explains more about the history of classical Chinese dance:
http://www.shenyunperformingarts.org/videos/index/play/6tD4ip5-OPs/classical-chinese-dance-intro

Beautiful music, dance and storytelling recapture nearly lost Chinese history
The beauty of Shen Yun Performing Arts is that it combines the elegance and charm of classical Chinese dance with music to tell the many stories of ancient Chinese civilization, stories to which people living in China today no longer have access.

The Shen Yun Orchestra is a key component of this storytelling process, combining the distinctiveness and beauty of classical Chinese music with the rigor and strength of a Western symphony orchestra. The sounds, sights and spiritual elements in this beautiful work of art continue to lift the hearts of audiences all around the world, reminding them of the importance of a culture built on freedom.

“Over its past 60 years of rule, the communist regime has treated traditional Chinese values–centered on the idea of harmony between heaven and earth–as a threat to its existence,” explains Shen Yun. “And in its systematic campaigns like the Cultural Revolution, it has uprooted traditional beliefs and destroyed ancient treasures–bringing traditional 5,000 years of civilization to the brink of extinction.”

Shen Yun Performing Arts coming to a city near you

Thankfully, what remains of religious and cultural freedom of expression here in the U.S. has allowed Shen Yun to flourish, keeping alive the endangered cultural wealth of ancient China. And you and your family can partake of this rich history in all of its glory by supporting the effort at a performing arts center near you.

Tickets and a full listing of all the locations where Shen Yun will perform in 2015 are available here:
http://www.shenyunperformingarts.org/tickets

“Principles such as benevolence and justice, propriety and wisdom, respect for the heavens, and divine retribution, all come to life, washing over the audience,” reads a concise summary of what Shen Yun entails.

Vatic, I am not sure this article is totally ruthful about the freedom of the china people. I am currently representing a company that makes LED lights in America and China. the US partner has been working with China for thirty years and spends six months in china every year. He told me the average factory hs a cafeteria that has such good food that it is where he takes almost all of his meals and with the workers. Thogh the workers live in dorms, because the jobs are so far away from their population, the hours worker per week is only 44, the building has plenty of green space and the average worker works five years and then leaves with about $20K in savings , which most use to then start their own business.
He says the people dislike the government like we dislike ours!
Not trying to make the place out to be perfect but he says it is night and day even from ten years ago. FYI

Warning! Before the West stuck its nose in China...the Warlords fought each other and kept the population down. On Hellen and Choas website it details and has info on Ancient White Civilizationb in Yunan Provience. Millions of these Ancient Whites were genocided and the women raped. You can go 50 miles in any direction and the chinese speak differenmt--not mandarin. They are a barbaric race who eat aborted baby soup. They are a evil Draconian Race who in the future will genocide whites and all non chinese again..

That is very interesting, do you have links to support that contention? It would help us to verify if you are correct and we then must do a retraction or clarification. Awaiting your links. Thanks.