Vatic UPDATE 1/18/11: Australia Flood and radar anomolies.  This was from A reader of the article on Australia.   He was kind enough to supply this link with a bit of a sarcastic tone to his one small comment  (we all do what we can and are capable of doing).  What is ironic is he proved that any other explanation that is suppose to be an act of nature,  would still have to be explained since THESE RADAR TECHS who do this for a living had not ever seen this before or it would not have been an anonomoly.  Capish?  So this does not act as clear proof this was NOT a HAARP event.  All this proves is that it was an anonoly the radar people did not understand and that its all speculation back then.  Remember, HAARP has been going through testing for years now before they made it operational, this could easily have been just such a test.    Otherwise why would the radar people call in the local big town newspaper to show it.  Why would Bearden put it up on his blog?  But then, such oddities would require questioning and critical thinking... would it not?  So we are still in the same boat, no answer as to what it is.  All the birds do, is prove they move, act and navigate by electomagnetism in our electromagnetic sphere, and that is all this proves.  They were responding to something, now weren't they?   Gee, I wonder what it was since it was NOT NORMAL.

This below is from Tom Beardens website of an article written in 1996 about radar anomolies with circular and octagonal shapes. Please read this and remember also the results appear to be the same involving birds. Its it natural or man made??? This was all speculation on their part as They did not know about Haarp at the time. I am not even aware if it was operational FOR REAL back then since they have not told us the truth for many decades now going back the the 1981 start of the Bush administration. But we are able to deduce that this is a new phenomena back then. We have no evidence so far that it happened after that and before now. 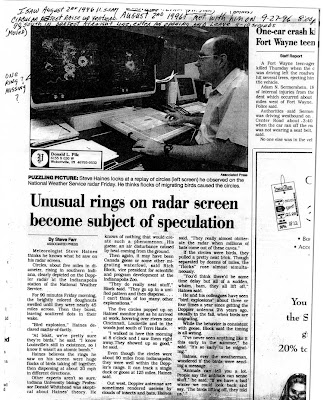 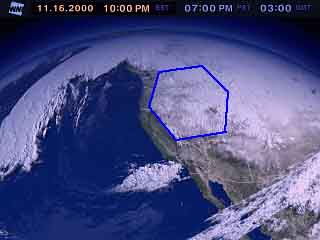 Here are the comments that accompanied this from Tom Bearden back then.

Is this Vandenberg AFB fighting off some weather threatening a missile launch? http://www.cheniere.org/satellite%20radar%20anomalies/radar%20maps/SB%20area/15%20March%202002/index.html

Commentary on the Florida Event of 24 February, 2001
http://www.cheniere.org/satellite%20radar%20anomalies/001.html

We will keep you updated as info comes in on both the shapes on the radar and the birds and fish die offs and further flooding around the world and especially Australia and Brazil.   We have a lot of people to try and help, especially if we did this by allowing the khazars to run our country.  .


The article is reproduced in accordance with Section 107 of title 17 of the Copyright Law of the United States relating to fair-use and is for the purposes of criticism, comment, news reporting, teaching, scholarship, and research.
Posted by Vatic at 6:31 AM

Here is a link to a news article 9last August) which explains the floods in Australia, why is no one making a comment about this?
http://www.heraldsun.com.au/news/breaking-news/thai-rain-maker-to-fight-drought-in-queensland/story-e6frf7kf-1225902740744