Vatic Note: Well, we just got finished discussing this. The khazars couldn't do the nuke attacks as false flags becuase they kept getting caught, or start world III for the same reason. Everything they tried that worked in the previous wars were called out and confronted. We were not as dumbed down as they had worked so hard to do. So this is how they decided to do it. Weapon of mass destruction to make them money in rebuilding.... got it? "POSTWAR PROPORTIONS"..... the good news, not as many deaths as a war or nuke attack would have been and with any luck, those that were harmed believed it was an act of nature and thus did not suffer psychologically beyond what would be normal, when it happened. Its still a crime. Khazar International Rothschild bankers need to be thrown out of every single country on the planet and soon before they can do anymore of their satanic damage to the planet and its people. 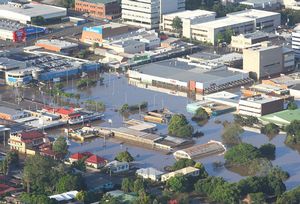 Floodwaters washing through Australia's third-largest city peaked today just shy of record levels but high enough to submerge entire neighborhoods and cause damage one official likened to the aftermath of war.

One man died in Brisbane after being sucked into a storm drain by the muddy waters, Queensland state Premier Anna Bligh said. Thousands of homes were swamped, and officials told residents it will be days before many of them can return to their houses. Others were told their homes will never be habitable again.

In one spot of bright news, the swollen Brisbane River's peak was about three feet (one meter) lower than predicted, at a depth slightly below that of 1974 floods that swept the city. The river had already begun to recede by Thursday afternoon, though it was expected to stay high for several days.

"Queensland is reeling this morning from the worst natural disaster in our history and possibly in the history of our nation," Bligh told reporters. "We've seen three-quarters of our state having experienced the devastation of raging floodwaters and we now face a reconstruction task of postwar proportions."

The flooding, which has killed 25 people since late November, has submerged dozens of towns — some three times — and left an area the size of Germany and France combined under water. Highways and rail lines have been washed away in the disaster, which is shaping up to be Australia's costliest, with early damage estimates around $5 billion.

At least 61 people are missing, and the death toll is expected to rise. Many of those unaccounted for disappeared from around Toowoomba, a city west of Brisbane that saw massive flash floods on Monday sweep away cars, road signs and people. Fourteen died in that flood alone, with police finding the bodies of two of those people on Thursday. Deputy Police Commissioner Ian Stewart warned that number was likely to rise as search and rescue teams accessed more devastated areas Thursday.

"We've got to brace ourselves for more bad news," Stewart said.

Almost 115,000 homes were without power across Queensland by Thursday because electricity was switched off to prevent electrocutions and damage to electrical systems.

In Brisbane, roads were flooded, railway lines were cut and sewage began spilling into the floodwaters. People moved about in kayaks, rowboats and even on surfboards. Boats torn from their moorings floated down an engorged river. Brisbane's office buildings stood empty with the normally bustling central business district transformed into a watery ghost town.

A 300-yard (-meter) stretch of a pedestrian boardwalk weighing 300 tons broke loose and drifted downstream before two tug boats were able to steer it away from bridges.

About 200 police officers were patrolling flooded streets around the clock. Three men were charged with looting after police said they tried to steal dinghies from the swollen river.

Despite the devastation, many remained thankful the river had spared them the worst of its fury.

"There's a fair bit of relief around this morning — we're thanking our stars a bit, that's for sure," said Andrew Turner, whose house in the flooded suburb of Graceville escaped inundation. "We were pretty much braced for the worst and were all but packed up and ready to go."

Lisa Sully, who lives in the nearby suburb of Sherwood, did have some water in her home — but she still felt lucky on Thursday.

"I can handle this," she said. "Mentally, I was prepared for worse."

The death toll has shocked Australians, no strangers to deadly natural disasters such as the wildfires that killed 173 in a single day two years ago.

One tale has particularly transfixed the country: a 13-year-old boy caught in the flood who told strangers to save his 10-year-old brother first and died as a result.

Jordan and Blake Rice were in the car with their mother, Donna, when a wall of water pummeled Toowoomba on Monday. After the torrent of water knocked one rescuer over, another man managed to reach the car, The Australian newspaper reported. At Jordan's insistence, he pulled Blake out first, according to a third brother, Kyle.

"Courage kicked in, and he would rather his little brother would live," the 16-year-old told the newspaper. Jordan and his mother were washed away before the men were able to get back to them.

By Wednesday, Jordan's name was among the top 10 most used terms on Twitter, as a wave of tweets hailed him as a "true hero" of the Queensland floods.

As the immediate crisis began to ease in Brisbane, focus returned to the search for the dozens still missing in the devastated Lockyer Valley, the site of Monday's deadly flash flood.

"This is a valley that has been completely and utterly devastated," Bligh said. "There are full towns that are now unrecognizable."

"The problem we have is that the people have been washed out of their homes and some of the homes are actually destroyed, like bombs have gone off there," Stewart told Nine Network. "It's a war scene in the Lockyer Valley today."

Though the full extent of the damage won't be known until the water is gone, even before Brisbane was threatened, Bligh estimated a cleanup and rebuilding to total around $5 billion.

Add to that, the damage to economy: Queensland's coal industry has virtually shut down, costing millions in deferred exports and sending global prices higher. Vegetables, fruit and sugarcane crops in the rich agricultural region have been wiped out, and prices are due to skyrocket as a result.