Vatic Note: Now this is good news..... something we all can do and force the powers that be to show their tyrannical nazi khazar zionist hand and true intentions by finally being forced into moving on us illegally. That would be the best way to be able to legitimately take them care of them for good. Iceland ring a bell?   It appears that is where the battle has to begin,   the feds are lost and nothing we do touches them, so now its time to go for power.  People power.  Take back control of our governments. 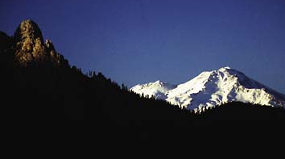 Mt. Shasta, a small northern California town of 3,500 residents nestled in the foothills of magnificent Mount Shasta, is taking on corporate power through an unusual process—democracy.

The citizens of Mt. Shasta have developed an extraordinary ordinance, set to be voted on in the next special or general election, that would prohibit corporations such as Nestle and Coca-Cola from extracting water from the local aquifer. But this is only the beginning. The ordinance would also ban energy-giant PG&E, and any other corporation, from regional cloud seeding, a process that disrupts weather patterns through the use of toxic chemicals such as silver iodide. More generally, it would refuse to recognize corporate personhood, explicitly place the rights of community and local government above the economic interests of multinational corporations, and recognize the rights of nature to exist, flourish, and evolve.

Mt. Shasta is not alone. Rather, it is part of a (so far) quiet municipal movement making its way across the United States in which communities are directly defying corporate rule and affirming the sovereignty of local government.

Since 1998, more than 125 municipalities have passed ordinances that explicitly put their citizens' rights ahead of corporate interests, despite the existence of state and federal laws to the contrary. These communities have banned corporations from dumping toxic sludge, building factory farms, mining, and extracting water for bottling. Many have explicitly refused to recognize corporate personhood. Over a dozen townships in Pennsylvania, Maine, and New Hampshire have recognized the right of nature to exist and flourish (as Ecuador just did in its new national constitution). Four municipalities, including Halifax in Virginia, and Mahoney, Shrewsbury, and Packer in Pennsylvania, have passed laws imposing penalties on corporations for chemical trespass, the involuntary introduction of toxic chemicals into the human body.

These communities are beginning to band together. When the attorney general of Pennsylvania threatened to sue Packer Township this year for banning sewage sludge within its boundaries, six other Pennsylvania towns adopted similar ordinances and twenty-three others passed resolutions in support of their neighboring community. Many people were outraged when the attorney general proclaimed, "there is no inalienable right to local self-government."

Bigger cities are joining the fray. In Pittsburg, Pennsylvania, council member Doug Shields announced this August that he is about to introduce a bill banning corporations in the city from drilling for natural gas, an environmentally devastating practice known as "fracking." As Shields stated in a press release, "Many people think that this is only about gas drilling. It's not—it's about our authority as a municipal community to say 'no' to corporations that will cause damage to our community. It's about our right to community, [to] local self-government."

What has driven these communities to such radical action? The typical story involves a handful of local citizens deciding to oppose a corporate practice, such as toxic sludge dumping, which has taken a huge toll on the health, economy, and natural surroundings of their town. After years of fighting for regulatory change, these citizens discover a bitter truth: the U.S. environmental regulatory system consists of a set of interlocking state and federal laws designed by industry to serve corporate interests. With the deck utterly stacked against them, communities are powerless to prevent corporations from destroying the local environment for the sake of profit.

Enter the Community Environmental Legal Defense Fund, a nonprofit public interest law firm that champions a different approach. The firm helps communities draft local ordinances that place the rights of municipalities to govern themselves above corporate rights. Through its Democracy School, which offers seminars across the United States, it provides a detailed analysis of the history of corporate law and environmental regulation that shows a need for a complete overhaul of the system. Armed with this knowledge and with their well-crafted ordinances, citizens are able to return to their communities to begin organizing for the passage of laws such as Mt. Shasta's proposed ordinance.

The Community Environmental Legal Defense Fund is collaborating with Global Exchange, an international environmental and workers' rights organization, to help supporters of the Mt. Shasta ordinance organize. In an interview for this article, I asked Shannon Biggs, who directs Global Exchange's Community Rights Program, if she expected ordinances of this type to be upheld in court. Biggs was dubious about judges "seeing the error of their ways" and reversing a centuries-old trend in which courts grant corporations increased power.

Rather, she sees these ordinances as powerful educational and organizing tools that can lead to the major changes necessary to reduce corporate power, put decision-making back in the hands of real people rather than corporate "persons," and open up whole new areas of rights, such as those of ecosystems and natural communities. Biggs connects the current municipal defiance of existing state and federal law to a long tradition of civil disobedience in the United States, harkening back to Susan B. Anthony illegally casting her ballot, the Underground Railroad flouting slave laws, and civil rights protesters purposely breaking segregation laws.

But the nascent municipal rights movement offers something new in the way of political action. These communities are adopting laws that, taken together, are forming an alternative structure to the global corporate economy. The principles behind these laws can be applied broadly to any area where corporate rights override local self-government or the well-being of the local ecology. The best place to start, I would suggest, is with banning corporations from making campaign contributions to local elections.

The municipal movement could provide one of the most effective routes to building nationwide support for an Environmental and Social Responsibility Amendment to the U.S. Constitution of the kind proposed by Tikkun. In fact, the movement is already expanding. In Pennsylvania people are now organizing on the state level. Similar stirrings have been reported in New Hampshire.

What about your community?

Allen D. Kanner, Ph.D., is a cofounder of the Campaign for a Commercial-Free Childhood (commercialfreechildhood.org), co-editor of Psychology and Consumer Culture and Ecopsychology, and a Berkeley, California, child, family, and adult psychologist.

Vatic this is fantastic,especially on the heels of Vermont telling the FDA to shove it and forming a constitution for food freedom.It's times like this that should not only be savored but replicated in all our communities!It's time to step up and take responsibility,and create similar movements in our own communities.Lets show them what the power of the people looks like.I hope many people forward this,and print this, put the article in strategic locations. Get it across to your representatives that we are sick and tired and not going to stand for their bull,That we are together on this. If there not, then get the ---- out of Dodge.Brock

I agree. It's about time that common sense prevailed. Here in northern Taiwan, public servants have seen the interconnectedness of a clean environment, jobs, and tourism. Business, society, and the environment actually need each other. The most effective policy in all three areas lies in a dovetailing that addresses the needs of all.
Meanwhile, down in central Taiwan, farmers, fishermen, and many others are losing their health and their means of income due to toxins spewed by one giant chemical plant that has the support of boneheads in the local and central government. The Ma Ying-jeou administration is actually paying bloggers to take a two-hour guided tour of the chemical plant in hopes that they'll gain "a better understanding" of the issue. (They could learn more by a one-month homestay among area residents.)
It's great to see the good guys win one. Thanks for posting.

No, American Policy Report, thank you for reading. I am sorry to hear about what is happening in Taiwan. Seems these cretins have a huge hold everywhere, but their time is coming to an end. I can feel it.

brock, I agree. I think we are going to see more and more of it too. Thanks