Clerk Note: The trend line suggests that what is done by the US Military overseas -- weapons, body armor, torture, training -- eventually rears its ugly head at home. Speak not of the legacy and reputation it left abroad.

At 9:30 a.m. on a gray winter Monday, the State Department officials began certifying the names at a rate of one every two minutes and 23 seconds.

In rapid succession, they confirmed that 204 police officers, soldiers, sailors, and airmen from 11 countries had committed no gross human rights violations and cleared them to attend one of more than 50 training efforts sponsored by the U.S. government. The programs were taking place at a wide variety of locations, from Italy, Albania, and Jordan to the states of Louisiana and Minnesota.

Thirty-two Egyptians were approved for instruction in, among other things, Apache helicopter gunship maintenance and flight simulators for the Sikorsky UH-60 Black Hawk. Azerbaijanis were cleared for a U.S. Army course on identifying bio-warfare agents in Maryland and underwater demolition training with Navy SEALs in San Diego. Thirty-three Iraqis were certified to attend a State Department training session for bodyguards, held in Jordan. Bosnians were bound for Macedonia to prepare for deployment to Afghanistan. Ukrainian police were selected for peacekeeping training in Italy. Romanians would study naval operations in Rhode Island and counterterrorism in Skopje.

This was only the beginning of one day’s work of vetting security personnel for U.S. training. A joint investigation by The Intercept and 100Reporters reveals the chaotic and largely unknown details of a vast constellation of global training exercises, operations, facilities, and schools — a shadowy network of U.S. programs that every year provides instruction and assistance to approximately 200,000 foreign soldiers, police, and other personnel. The investigation exposes the geographic and political contours of a U.S. training system that has, until now, largely defied thorough description.

The data show training at no fewer than 471 locations in 120 countries — on every continent but Antarctica — involving, on the U.S. side, 150 defense agencies, civilian agencies, armed forces colleges, defense training centers, military units, private companies, and NGOs, as well as the National Guard forces of five states. Despite the fact that the Department of Defense alone has poured some $122 billion into such programs since 9/11, the breadth and content of this training network remain virtually unknown to most Americans.

The contours of this sprawling system were discovered by analyzing 6,176 diplomatic cables that were released by WikiLeaks in 2010 and 2011. While the scope of the training network may come as a surprise, the most astounding fact may be that it is even larger than the available data show, because the WikiLeaks cables are not comprehensive. They contain, for example, little information on training efforts in Colombia, the single-largest recipient of U.S. training covered by the human rights vetting process that produced these records. Other large recipients of U.S. security assistance, such as Pakistan, are vastly underrepresented in the cables for reasons that remain unclear.

“What you have stumbled across is a systematic lack of strategic thinking, a systematic lack of evaluation, but a massive commitment of people and money and time in a growing number of countries,” said Gordon Adams, formerly a senior White House official for national security and foreign policy budgets. “I think the word ‘system’ is a misnomer. This is a headless system,” he said.

• A global training network without any coherent strategy, carried out by scores of agencies and offices with no effective oversight, centralized planning, or a clear statement of objectives.
• The lack of any means of testing and evaluation, let alone a comprehensive way to count or track foreign trainees.
• Vetting procedures designed to weed out human rights abusers that examine trainees so rapidly that experts question their worth. 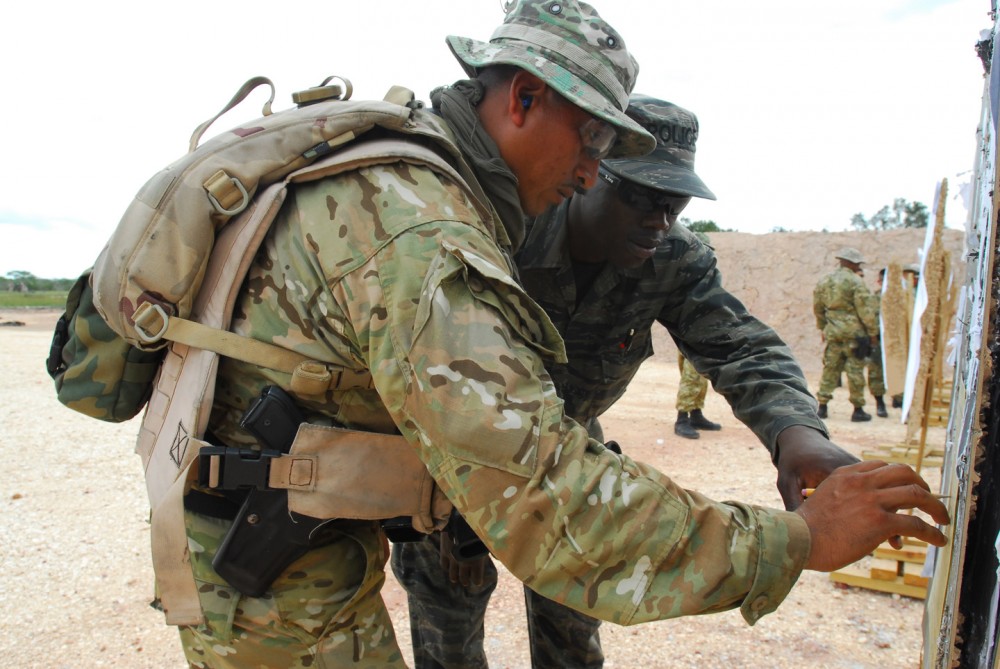 A Rand Corp. analysis from 2013 found that the Pentagon alone has 71 different authorities under which it provides foreign aid as a means of “building partner capacity,” or BPC — part of a system that the report criticized as akin to “a tangled web, with holes, overlaps, and confusions.” The Pentagon, for example, maintains no master list of the people it trains nor does it keep aggregate figures.

“The way we do security cooperation has been a patchwork that we’ve added to over and over,” said Rachel Kleinfeld, a senior associate at the Carnegie Endowment for International Peace and former member of the State Department’s Foreign Affairs Policy Board. “There are more than 180 authorities and scores of agencies working in these areas, and the way it has evolved over time has made it absolutely impossible for anyone to know what’s going on. … There really is no oversight.”

Details on the U.S. government’s training programs have long been lacking. In 2012, the Obama administration submitted a one-time report to Congress on foreign police training that covered just two fiscal years — and it was never made public. Annual disclosures by the State Department about foreign military training programs cover many volumes but are often vague and difficult to analyze, with information frequently missing or reported inconsistently.

The diplomatic cables that were mined for this investigation were written between December 1999 and February 2010 and were among a far larger batch of documents leaked by Army Pfc. Chelsea Manning; a military court subsequently sentenced Manning to 35 years in prison. The cables provide the identities of nearly 60,000 trainees and units from 129 countries (today, the number stands at more than 150 countries) who were selected by U.S. government entities as varied as the FBI, the Defense Department Fire Academy, the Patent and Trademark Office, the National Geospatial-Intelligence Agency, and the National Park Service. Only some of the cables contained enough information to appear on the accompanying map, which depicts the planned movements of just under 39,300 people and units between 2003 and 2010.

The cables also reveal that more than two-thirds of the State Department’s vetting approvals were granted for training programs carried out overseas rather than in the United States. Domestically, training was conducted in 39 U.S. states as well as Puerto Rico, Guam, and the District of Columbia. At least 57 domestic Army, Air Force, Navy, and Marine Corps bases were involved in these domestic training efforts. Additional research by The Intercept and 100Reporters indicates that little has changed in the years since the cables were released; the global U.S. training system remains sprawling, opaque, and in disarray.

William Hartung, a senior adviser to the Security Assistance Monitor, which tracks American military aid around the globe, said the scale of the training efforts was “just mind boggling.”

“It’s sort of a question of, ‘Where aren’t we training people?’” he said. “It’s hard to imagine any other country in the world being in a position to do all this and to do it with so little scrutiny.” 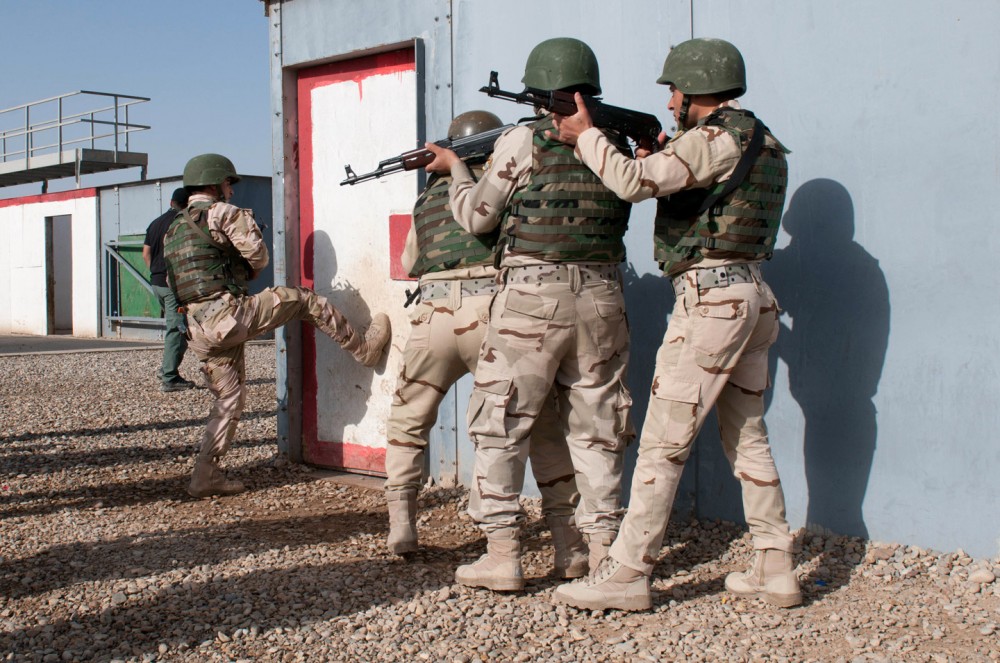 A soldier of the Iraqi army’s 16th Division kicks in a door during a training exercise at Besmaya Range Complex, Iraq, March 21, 2015.

The WikiLeaks cables examined in this investigation were written to comply with the so-called Leahy Law — a vetting process meant to weed out foreign trainees or units implicated in “gross human rights violations.” While the Leahy Law has prevented some aid from reaching units in countries like Pakistan and Indonesia, it has been routinely criticized as ineffective and filled with loopholes that are used to circumvent the law’s intent. Its implementation has also been hobbled by a lack of funding. As Lora Lumpe, a senior policy analyst at the Open Society Foundations, has observed, the State Department office that controls the Leahy vetting operated on a budget of just $2.75 million in 2014, while the security projects it oversaw were worth as much as $15 billion. The number of cases it vetted in 2015 was astounding — 191,899. The total number of individuals trained is certainly higher: According to the State Department, a single case can comprise thousands of individuals.

“When you say we have to look at every individual and every unit and you actually have to do the vetting, you get far too many people who are technically vetted, but who we actually know very little about,” said Kleinfeld of the Carnegie Endowment. “So you build a haystack where you’re looking for a needle. And as you build that haystack, the vetting necessarily becomes worse.”

Questions about the vetting process are accompanied by concerns about the effectiveness of the training programs. Last year, a $500 million Pentagon effort to train and equip Syrian rebels, slated to produce 15,000 fighters over three years, yielded just a few dozen before being scrapped by the Obama administration. A 13-year effort in Afghanistan has resulted in an army filled with “ghost” soldiers, wracked by desertions and continuing to suffer setbacks and lose territory to a relatively unpopular insurgency. And then there was the spectacular collapse of the Iraqi army in 2014 to the much smaller forces of the Islamic State (though the territory lost at the time is beginning to be won back).

These failures call into question whether these far-flung programs “can ever achieve their desired effects,” according to a 2015 report by the Congressional Research Service. “Despite the increasing emphasis on, and centrality of, BPC in national security strategy and military operations, the assumption that building foreign security forces will have tangible U.S. national security benefits remains a relatively untested proposition.”

A 2015 report by the Center for a New American Security similarly concluded that many “security assistance and cooperation interventions fail to accomplish U.S. objectives as a result of both strategic and structural deficiencies.” It found that training goals are often poorly articulated and sometimes in conflict with each other. In 2013, a State Department advisory panel also found that American security aid had no coherent system of planning or evaluation and no overall strategy. It compared the “baffling” array of federal funding sources to “a philanthropic grant-making process by an assemblage of different foundations with different agendas.”

That year, the Obama administration attempted to bring order to foreign security assistance through a directive that, according to the Congressional Research Service, calls on national security agencies “to improve, streamline, and better organize” all American international security assistance and cooperation. According to the National Security Council, the administration directed the State Department to “synchronize” foreign security aid programs. The State Department, in response, has said it “continues to play a leadership role” in carrying out the still-unpublished 2013 directive, but the results have been murky and basic information from various agencies is still lacking. The Department of Justice, for example, said it does not track foreign training at the department-wide level.

The failure of the State and Justice departments to meaningfully manage and track their training programs is mirrored by similar deficiencies at the Department of Defense. Despite its claims that programs are “closely overseen,” the Pentagon can’t even say how many foreign troops it mentors. According to Lt. Col. Joe Sowers, a Department of Defense spokesperson, “Because training is provided through multiple authorities, appropriations accounts, and geographic combatant commands, there is currently no single database that provides a total figure for the number of foreign security forces trained.”

Kleinfeld, from the Carnegie Endowment, describes the situation as a strategic failure. “No one knows how many people are being trained because of the lack of centralization — because State does some training, National Guard does some, the FBI, the DOD,” she said. “No one has any idea what’s going on.”

This story was co-published with 100Reporters as part of its series investigating chronic failures in the U.S. training of foreign police and military personnel.


The article is reproduced in accordance with Section 107 of title 17 of the Copyright Law of the United States relating to fair-use and is for the purposes of criticism, comment, news reporting, teaching, scholarship, and research.
Posted by Vatic Clerk at 2:11 AM