Vatic Note:  Now, for the first time, we know why JFK was killed.  Obviously these khazars don't do something for only one reason, but this was a big one.  Its amazing what we do not know.   How did we ever let that happen???? We need restrictions on press ownership or we will never know truth in history.

I remember Vanunu very well.  I was alive and aware during the time that Israel threw him in jail for exposing the fact that Israel had nuclear weapons and how many of them, that no one knew about.  Its a miracle that no arab countries began back then to build their own, with Israel and the khazars right on their border.

JFK was insisting on inspections at that time and shortly there after he was assassinated.   Add to that, the fact that he fired Dulles as CIA director, made the case all the more pressing.   CFR was and still is run by the Zionists and their members do their bidding within the various administrations.  Its a back door infiltration of sorts.  You will see that below, when you see what subsequent other Presidents, from Johnson to Nixon did that was acceptable to the Israeli's.

They went after Ron Paul in the same way that Israel went after Vanunu, funny how that coincidence happened.  Slandering and fabricating is definitely a talent if you don't get caught at it.  Anyone who saw the blatant illegal manipulation of the GOP convention in the 2012 election cycle, knows that Ron had the delegates to win the nomination,  and polls showed he would have beaten Obama,  but the GOP is as sold out as the dems are and I am talking about leadership, not the grassroots.

In my youth, if anyone had done what was done to Ron Paul, they would have been arrested for committing such a blatant crime.   But then, when you have a foreign nation infiltrating your country, then it will eventually begin to look just like the way things are run in that foreign country.  We should expect no less if they prevail. 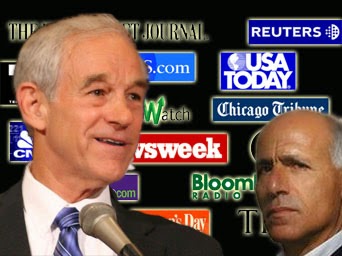 One week before the Iowa caucus as Ron Paul’s poll numbers are surging, the Media’s scrutiny is focused on the contents of an “investment newsletter” that Paul produced and profited from back in the ’80s and ’90s. Entitled the “Ron Paul Investment Newsletter” or the “Ron Paul Survival Newsletter” it also contained a series of racially biased attacks.

Paul maintains he didn’t write the pieces but The Washington Post is running a series of four columns this week examining “how factual Rep. Ron Paul (R-Tex.) has been in describing his career in politics” entitled Fact Checker: Ron Paul and the racist newsletters. I posted a few comments, beginning with this one:  (VN: I am sure everyone knows who owns the Washington post, another MSM property of ill- repute.    I believe nothing of what the MSM says anymore.  Their approval rating is at an historical low..... 19% and I bet that is playing havoc with their advertising revenue.  Serves them right for betraying their function and purpose.)

Google “The Serial Hypocrisy of The Media vis-a-vis Ron Paul and Mordechai Vanunu” which is the first in THAT ongoing series!

PS: The photo is of me and ‘retired’ as in fired White House Correspondent Helen Thomas. Goggle “An Evening with Helen Thomas and Flashback to John Lennon and Vanunu Mordechai” for the first in THAT ongoing series.

Time will tell if WaPo will follow that lead and another comment that led Back to Ron Paul, The Media and Mordechai Vanunu
Read more…

eileen4HOUSE2012 It is lame to wish you a Merry Christmas when I wish you a FINAL Christmas in a place that is not home to you and decades more in full freedom, health and happiness.

“The ‘Serial Hypocrisy’ of The Media vis-a-vis Ron Paul and Mordechai Vanunu” has spread to multiple pages on a Google Search and i think mostly because many Americans are favoring Ron Paul for president. So my next step is try to reach him and remind him that in 1996, 36 congressional reps stood up for Vanunu’s freedom because “we have a duty to stand up for men and women like Vanunu who dare to articulate a brighter vision for humanity.”

My Letter to Ron Paul:

Dear Representative Ron Paul,
I am seeking your response to the following to be published in a series regarding The Serial Hypocrisy of The Media vis-a-vis Ron Paul and Mordechai Vanunu.

In April 1999, thirty-six members of the House of Representatives sent a letter to President Clinton regarding the incarceration of Israel’s nuclear whistle blower because they believed “we have a duty to stand up for men and women like Mordechai Vanunu who dare to articulate a brighter vision for humanity.”

President Clinton responded with a public statement expressing concern for Vanunu and the need for Israel and other non-parties to the Non-Proliferation Treaty to adhere to it and accept IAEA safeguards.

Were you one of the 36 congressional representatives who signed that letter?

Will you also comment regarding what Vanunu told me in 2005:

“Did you know that President Kennedy tried to stop Israel from building atomic weapons? In 1963, he forced Prime Minister Ben Guirion to admit the Dimona was not a textile plant, as the sign outside proclaimed, but a nuclear plant. The Prime Minister said, ‘The nuclear reactor is only for peace.’

“Kennedy insisted on an open internal inspection. He wrote letters demanding that Ben Guirion open up the Dimona for inspection.

“When Johnson became president, he made an agreement with Israel that two senators would come every year to inspect. Before the senators would visit, the Israelis would build a wall to block the underground elevators and stairways. From 1963 to ’69, the senators came, but they never knew about the wall that hid the rest of the Dimona from them.

“Nixon stopped the inspections and agreed to ignore the situation. As a result, Israel increased production. In 1986, there were over two hundred bombs. Today, they may have enough plutonium for ten bombs a year.”

If you were President what would you do?

Thank you for your consideration and most sincerely all the best,
Eileen Fleming, Citizen of CONSCIENCE for House of Representatives 2012

Founder of WeAreWideAwake.org Staff Member of Salem-news.com
A Feature Correspondent for Arabisto.com and Columnist for Veteranstoday.com

Author of “Keep Hope Alive” and “Memoirs of a Nice Irish American ‘Girl’s’ Life in Occupied Territory” and BEYOND NUCLEAR: Mordechai Vanunu’s FREEDOM of SPEECH Trial and My Life as a Muckraker: 2005-2010

ENCLOSED: a copy of BEYOND NUCLEAR: Mordechai Vanunu’s FREEDOM of SPEECH Trial and My Life as a Muckraker: 2005-2010

Vanunu addressed The Media just prior to being sent back to solitary confinement for 78 days in the summer of 2010- the outcome of his freedom of speech trial and essentially punishment for speaking to foreign media in 2004 after he emerged from 18 years in a windowless tomb sized cell for telling the world the truth about Israel’s 7-story underground weapons of mass destruction facility at the Dimona plant in the Negev Valley:

Vanunu Mordechai Freedom of Speech,about all world Media, May 23-2010.

Eileen Fleming, A Citizen of CONSCIENCE for House of Representatives campaign can be followed at EileenFleming.org. Eileen also founded WeAreWideAwake.org, Produced "30 Minutes with Vanunu" and "13 Minutes with Vanunu" and authored "Keep Hope Alive" and "Memoirs of a Nice Irish American 'Girl's' Life in Occupied Territory" and BEYOND NUCLEAR: Mordechai Vanunu's FREEDOM of SPEECH Trial and My Life as a Muckraker: 2005-2010. Visit Eileen's YouTube Channel
Powered by Starbox

The views expressed herein are the views of the author exclusively and not necessarily the views of VT or any other VT authors, affiliates, advertisers, sponsors or partners and technicians. Notices