Vatic Note:   ahhh, and so the NWO is trying to put itself in place, both countries have khazar supported leaders within.  Remember, it was Germany that introduced the world to the "Illuminati" and the Rothschilds financed the fascist movement in nazi germany.   They simply relocated to the USA, while Hitler's daughter retained control of Germany.  France is no different.  Britain will pretend, but in the end will also, "SURPRISINGLY" succumb to the move.  lol   THE US DOES NOT LEAD THE ROTHSCHILD BANK, ITS THE BANK OF LONDON, UNDER BRITISH RULE, THAT DOES THAT.  SO WHAT IS HAPPENING IS THEY ARE REDIRECTING "HOW WE THINK" INTO BUYING INTO THE NAZI syndrome for America.

They are trying to  use deception to make us buy into it.  I believe absolutely nothing of what they say and only half of what they do.  BRICS is the NWO currency now, watch and see.   All they have left to do is take down the USA and occupy us with those horrible khazar Russian troops that murdered millions of Germans after WW II.

Check this out, this explains this entire issue perfectly.  I always did like Ford, the founder of Ford motor company.  He got this right on, and see if this doesn't fit prefectly this we are reading below........ 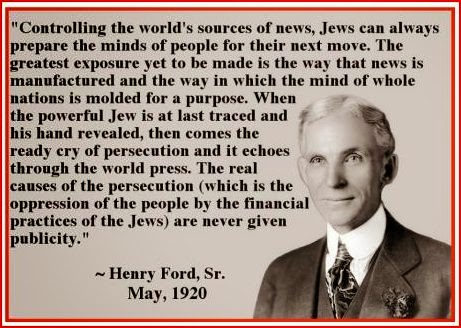 (VN: that is what this below is....... "PREPARING THE MINDS OF THE PEOPLE FOR THEIR NEXT MOVE....." which is globalizing currency.  Gee, what a surprise!  Remember, also 3,000 of Chinas' leaders were educated and trained in Oxford, the home of secret societies in universities,  right under the nose of the Rothschild cabal..... Wonder what they learned???  LOL  Lets also remember, Clinton was also educated at Oxford and we saw what he did to lay the foundation for the takeover of our nation.  His wife is exactly the same, so no more Clintons for President.  Now, they will come after the wealth of the multimillionaires who are not khazar Jews, only the goyim, gentiles etc.  Yup, they plan on making us the next "PALESTINIANS". )

Europeans defy US to join China-led bank:  (VN: they are not defying us, our foreign occupied government, definitely wants them to join. Thats the whole purpose of this show case they have put on.  Its for our (the millions/billions of global citizens) consumption and they hope we buy it hook line and sinker. )

The finance ministries of France and Germany have confirmed they’ll join China’s new Asian Infrastructure Investment Bank (AIIB), and Italy is expected to soon. Joining the rival to the US-led World Bank is seen as a setback for the Obama administration.

Germany’s finance ministry said it was joining the bank, the BBC says, although Italy has yet to confirm the earlier report by the Financial Times (FT).

Move Over, IMF: BRICS Bank Aims to Rewrite the Rules of Development
BRICS ~ Brazil, Russia, India, China, & South Africa: Block Rothschild’s US and EU Computer Generated Ponzi Bailout Scheme Money Issuances. (VN: and  put their own in place under the Rothschild  Goldman Sachs International that runs China and whose leaders were trained in Oxford.  hahahaa, boy are we ever stupid, they were right when they wrote that fact in the protocols.   They said we, the goyim, were so stupid we would believe everything they tell us to believe.  Check it out, its in protocol #15, subsection 6,  check it out.   we did a whole analysis on #14 and 15.)

The decision comes after Britain [?? This is Rothschild Country] last week became the first Western country to agree to become a founding member of the AIIB, FT reports. The UK government said the decision was in the country’s national interest, but it got a negative reaction from the United States.

The new China-led bank is expected to challenge the Washington-based World Bank aka; [Rothschild World Bank aka IMF], so the US is increasing pressure on its allies not to join the institution. The US’ concern is that the new investment bank might not have high standards of governance and environmental and social safeguards.


British Operative Billionaire And Convicted Felon George Soros: Warns Sovereign American Citizens, Against Resisting The NWO International Banking System – also Nicknamed “Open Society”.
Is this real or is this another backdoor to NWO?
The new bank is expected to challenge the Western dominance of the US-led World Bank and IMF in global infrastructure projects, which experts believe will create healthy competition.


“Our messaging to the Chinese consistently has been to welcome investment in infrastructure but to seek unmistakable evidence that this bank… takes as its starting point the high watermark of what other multilateral development banks have done in terms of governance,” US Regional Assistant Secretary of State Daniel Russel said in Seoul, the Financial Times reports.

NWO Flushing the old system for a NWO China? ~ OR ~ NWO actually being flushed out by China & Russia for a sovereign existence?

The existing structures of world governance (UN Security Council, IMF, World Bank and the ADB) were essentially established in 1945, when the United States and Europe were predominant

The AIIB is just one of China’s recent efforts to remake the world’s multilateral institutions in its own image. In partnership with India, Russia, Brazil and South Africa, China also set up the New Development Bank, also known as the BRICS bank, last year, as well as a development bank led by the Shanghai Co-operation Organization and a currency reserve fund to help countries cushion against financial crises and shocks.

Washington has been lobbying its allies not to join the AIIB. An Obama administration official quoted anonymously by the Financial Times accused the UK of “a trend of constant accommodation of China, which is not the best way to engage a rising power.”  Forbes

Meanwhile, Chinese officials say the AIIB’s operation and governance will be open, transparent, inclusive and responsible.

The three major financial institutions – the IMF, the World Bank and the Asia Development Bank will not be able to cope with the tremendous amount of work that needs to be done, investment advisor at Motley Fool David Kuo told RT.

“You shouldn’t politicize something like infrastructure. People have a right to communication and a right to uninterrupted power – these are all parts of the infrastructure projects that many countries are crying out for,” Kuo said. He hopes that there will be a certain amount of competition with the new China-led investment bank. Kuo suggests Germany, France and Italy have much to offer the Asian people, as they can bring expertise as well as money.


“They told us they are considering. Whether Japan will join, we do not know. It is Japan’s own decision,” Chinese Finance Minister Lou Jiwei said, according to the Xinhua news agency.

Nearly 30 countries have confirmed their participation in the AIIB, which is aimed at helping finance infrastructure projects across Asia and is expected to come into being this year.

The AIIB was formally launched by Chinese President Xi Jinping in 2014, and is expected to become a tool of a broader Chinese push for growing international power and economic significance.
RT

GREECE is to make a repayment to the IMF, on its loans on the 9th of April.
Indeed, Greece & the IMF have announced that the payment will be made.
One problem, they can't make the payment because they do not have the money.
So why have Greece & the IMF confirmed that the payment is as good as paid (?)
Because the European Union is fragile & falling apart.
Therefore, though Greece will default on their payment, the IMF & the EU will announce the payment having been made & sign off on it.
The new banks are waiting in the wings ready to embrace the FORMER NATION MEMBERS of the EUROPEAN UNION with all manner of services.
The UK is ready & being urged by even Australia to jump.
The CEC Party's Sydney Road office is next door to where I fill up my car.
They have a weekly show on TV look them up Robert Barwick & Craig Isherwood - these people are the only political beings in Australia worth a bean.