***Fundraising again - It's now the 16th and time to meet our deficit obligations again which is currently at $300, and we will need it by the first of the month of July.  Please, if you feel you can afford it, donate at the pay pal button off to the right. There is no doubt that without your help, we cannot do this alone.  I wish we could, but the time it takes to research, confirm, information provided, is big, and that cuts into our ability to do other work that generates income.  So, we need you to only make up the difference between what we can cover with our own income, and what is needed. We call that our deficit.

We appreciate any help you can give to keep us on the net.
We also wish to thank everyone for all their support in reading, distributing and helping fund the blog at this most important time in our history.  We earlier received a donation of $10, which leaves us a balance of $290. Thanks to the donor of that money.  Every penny helps. AT this time we are still needing $290.  Please do what you can no matter how small or big, to help us continue this work.  Bless you all for your support over these past 4 years.

Vatic Note: This is an excellent article and it clearly tells us what has happened to us in the currency markets, in both fiat paper and gold and silver.   Remember, JFK was killed because he signed an EO giving control of our currency back to the US treasury and taken it away from the federal reserve.  Rothschild/Israel then did in JFK with Johnsons help who then rescinded that decision, thus leaving control of the US currency and credit with the Rothschild owned Federal Reserve.  Its seriously time to finally enforce the laws of our country with respect to theft and treason.

Well, it appears all this missing gold has found a home with Rothschild shills.  Now Iraq is being drawn into the fold as we suspected after the so called war in Iraq.   This is a very interesting set of facts about this subject, especially what is going on with gold purchases from emerging economies.   Brazil, Iraq, North Korea, and China have all bought gold in anticipation of the dollar collapse.

Recently we did several articles about gold, one was about 57 tons of US gold out of fort knox that was being melted down by Switzerland for storage.  So who passed that gold onto them to be melted?  Well, Switzerland is home of the BIS which is owned by Rothschild, so that means the Fed Reserve has committed theft and treason, with the latter being a death penalty offense.  Lets see what happens and who did Iraq buy gold from???

Who is selling this gold to these emerging economies?  Why are they willing to do so when gold will be the basis for future currencies?  Something does not smell right here.  Someone is selling them the gold and what are they taking as currency for that gold?   Is it the US Dollar?   Why in the world would they do that?   If every nations currency is going to eventually be gone, why would anyone take the various countries currencies for the gold???  Yup, something isn't right here.  We will have to watch this for a while.

Gold will be supported by the strong likelihood that central banks will continue buying bullion after data showed Brazil boosted its reserves for a third month, Russia continued to diversify into gold and Iraq entered the gold market for the first time in many years and quadrupled their gold reserves in just two months.

Central banks have bought 426.5 tons of gold so far this year.

Iraq quadrupled its gold holdings to 31.07 tonnes over the course of three months between August and October, data from the International Monetary Fund showed on yesterday.

The IMF’s monthly statistics report showed the country’s holdings increased by some 23.9 tonnes in August to 29.7 tonnes. 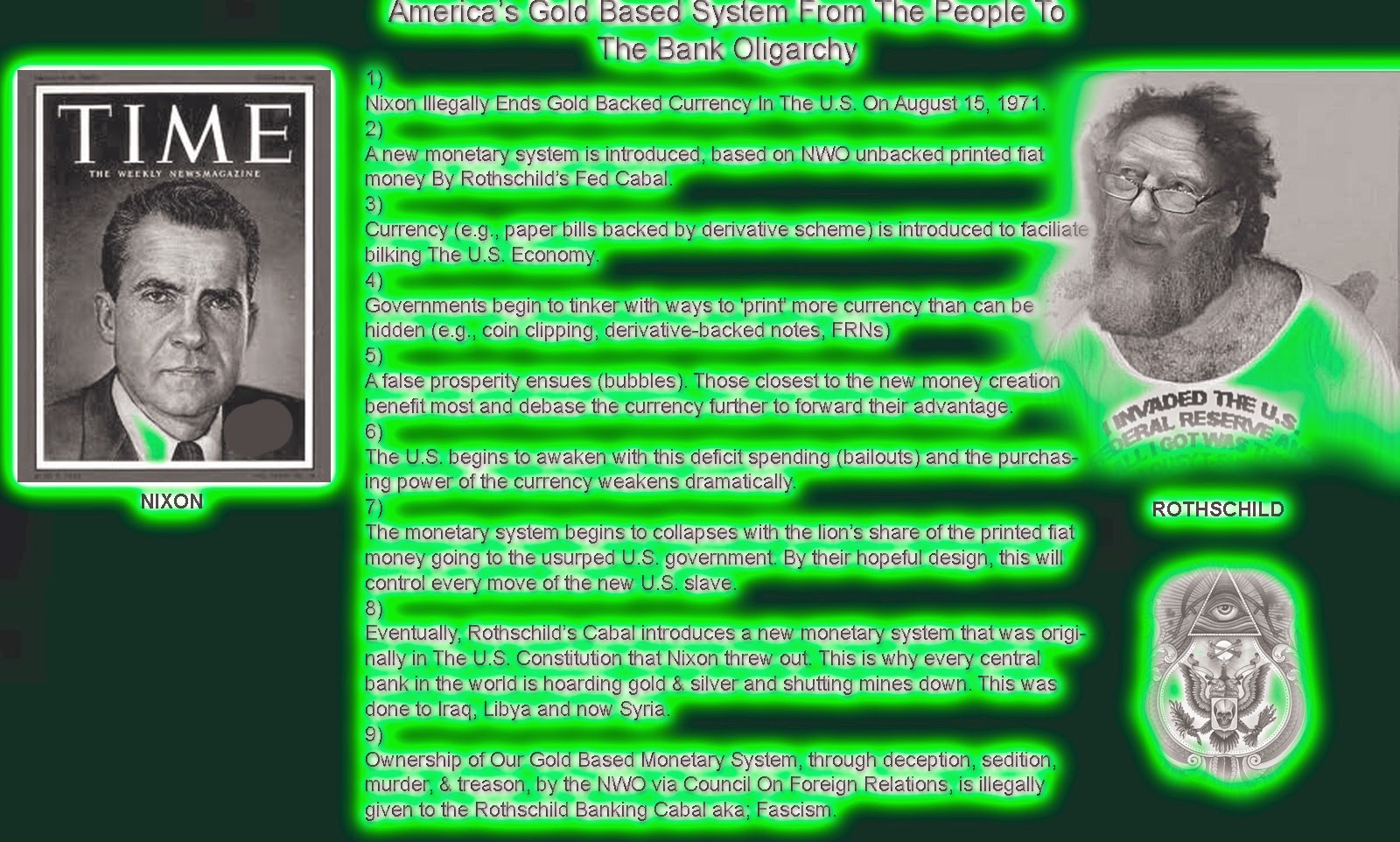 THIS IS WHAT IS ACTUALLY TAKING PLACE RIGHT NOW!
Claiming U.S. Wealth Of Gold And In Its Place Like A Tooth Fairy Leaving Only ‘Worthless Fiat Printed USD Money’.

NIXON ILLEGALLY DROPPED OUR GOLD BACKING FOR ROTHSCHILD TO PILFER THE U.S. WITH PAPER. NOW THAT THE U.S. IS SMOTHERED WITH FORCED PAPER [ARTIFICIAL] DEBT ~ ROTHSCHILD HAS BEEN [MERGING] THE GOLD FROM LIBYA TO HIS VAULTS. ONE OF ROTHSCHILD’S VAULTS IS NOW BAGHDAD. THIS IS WHY ROTHSCHILD’S COMEX HAS ALSO BEEN ARTIFICIALLY DUMPING THE GOLD/SILVER CHARTS -> TO GET PEOPLE OUT OF THE GOLD/SILVER MARKET

JUST REMEMBER SILVER IS 5Xs MORE SCARCE THAN GOLD AND INDUSTRY USES SILVER FAR MORE SO THAN GOLD. JUST WAIT UNTIL THE BOTTOM IS HIT ON THIS ONE ~ THE PRECIOUS METALS MARKET WILL SKY ROCKET INTO INFINITY AND THOSE MESMERIZED BY FOOTBALL GAMES AND PARIS HILTON WILL BE EATING CAT FOOD IN THE ALLEYS I AM VERY SORRY TO SAY THIS IS THE ELITIST GAME AND THATS HOW THESE SOCIOPATHS THINK AND THIS IS ALSO HOW WE AMERICANS GAVE UP ON OUT--THINKING THESE VIGILANT PARASITES.
It is Iraq’s first major move in years to bolster its gold reserves. More recently, Brazil raised its gold holdings by 14.68 tonnes, or 28 percent, in November, bringing its bullion reserves to 67.19 tonnes.

The addition comes on the heels of an even bigger increase in October when the South American country added 17.17 tonnes to its reserves. In September, it increased holdings by 2 tonnes.

The central bank of Iraq’s quadrupling of gold reserves is important as there are many oil rich nations in the world with sizeable dollar and euro currency reserves and only a small allocation to gold by these central banks alone could lead to higher gold prices.

The smart money will continue to dollar cost average and buy gold on dips.
Zero Hedge


We are on the brink of something the majority of people in the world are not prepared for. The complete elimination of fiat money and a return to a gold standard. The US Treasury and the US Mint are walking the same fine line that the CFTC is walking as they try to slowly introduce position limits on gold and silver COMEX contracts. Nobody wants to ROCK THE BOAT and get blamed for the crash, but all are preparing for the END of fiat money.
It’s only a matter of time. -Bix Weir

Rothschild’s Plan For Transference Of Wealth & Power From The U.S. To Himself!

The Rothschild Gold Must Be Disgorged!

Yes, it all started in earnest in 1971 when Richard Nixon unconstitutionally removed the USD from the gold standard. This allowed the Rothschild’s British ‘City Of London’ Gang to begin flooding the U.S. market with worthless newly printed USD paper. This Rothschild ulterior plan would: 1) Subjugate the people to a welfare state, 2) Remove The U.S.’s sovereign power as the leader in the world 3) Abscond The U.S.’s military power to destroy Middle East States that were on a gold standard 4) Remove their gold into London.

Once this was accomplished and Nation States were flooded out by their own currency through bailout schemes. Rothschild simply through his matrix of banking cronies, resets currencies back to the gold standard where he is now in charge instead of The United States Of America. This is what is called The New World Order by the ‘father of the mafia’ Rothschild. The mafia never originated in Italy (thats hollywood stuff), it originated in Britain by the Rothschild’s and moved this modus through countries like Italy. Why Italy, because The Roman Catholic Church is Rothschild’s mortal enemy.

Where did the value go? It went into trillions and trillions of newly printed dollars that Americans now have to work off in the next 30+ years or so with less jobs and higher medical taxation. Where’s the GOLD? Good question ~ many have assumed it being spirited away to London.

The U.S. is a battle field of murders, mini ponzi schemes, faked suicides, orchestrated false flags, demonization of family unity, out right lying by the media, control of the media by the cabalists, out right lying by the putative president, supplying arms to the mexican drug cartel by Obama/Holder/Hillary, violation of the war powers act by Mccain/Lieberman/Graham, violation of miranda rights, violation of taxation laws by john Robert’s of USSC to pass obamacare, murder of judges, violations by judges, prevention of candidates Ron Paul, transferring 2012 presidential election ballots to George Soros a known felon’s company in Spain, and all on an unprecedented scale etc. etc.

Remember, the price of gold really doesn’t go up or down. It’s very stable. Most people think that gold has gone up over the last 10 years, what has really happened is that the U.S. dollar has gone down.

Gold Vs Us Dollar

We perceive the drop in the value of the dollar in terms of how many dollars it costs to buy goods and services today versus back in 1971 when the dollar was on the gold standard.

You can read more about how inflation has impacted the costs of goods and services at inflation adjusted price of gold.

Back in 1964, a quarter would buy you roughly a gallon of gas. That’s because quarters made in 1964 and earlier were made with roughly 90% silver and 10% copper.

So the spot price of silver being roughly $31 an ounce, that makes that same quarter from 1964 worth almost $5.63. It takes about 5.5 silver quarters from 1964 and before, to make up about an ounce of silver. So the same 1964 and earlier quarter (in terms of silver value) will buy about 1.5 gallons of gas. Practically the same amount of gas that it did back in 1964 and even a little more! However, it today’s inflated dollars, it would take 15 quarters to buy a gallon of gas!

The price of gold may fluctuate with the vale of the dollar but it doesn’t change the fact that precious metals like gold and silver retain their value throughout time. The only thing that changes is the value of the currencies that are not tied to the value of gold and silver.
This is what the founding fathers warned us about and tried to prevent from happening with the Constitution.

What you need to understand is that the excess printing of the U.S. currency is just another tax on the American people. It takes the value of the dollars that people have, and makes them worth less in the long run. Meanwhile, you are still making roughly the same amount of money yet the price of everything from gas to milk are going up constantly when in reality, nothing is really going up in price but instead the actual value of the dollar is dropping.
Gold Retirement Plan