Vatic Note: We have covered quit a bit about Lady Gaga and her impact on our children in the field of Satanism and mind control.  Subliminal messaging is a specialty of the satanists who are in charge of this MTV entertainment field. This is how they intend to reach our children and bring them into the satanic covens pervading our entire globe these days, including massive inroads to our young in the military which is way more scary than anything else. The military even has official documents that treat satanism as a legit religion. Its gone so far as to open the door to these satanists coming out of the closet as they now believe they are powerful enough to take over. Here is a link  to a discourse about that eventuality by a high up satanist. Our children truly are at risk. This is genuinely serious. Because of endoctrination, satanic ritual abuse etc, leaders can be groomed from an early age to take power and rule by satanic guidelines as we saw with Bush Jr when he pardoned a satanic ritualist murderer.   There is much more that we have covered on this subject to be sure.  Search under Satanism,  Entertainment field and Satanism, etc.  These we have included here are only a small amount of what we have shown globally and at the highest levels of government where satanism exists.   It explains why the hold on these leaders is so very tight.  The Khazars have their own scandels with respect to this issue which I will go into at a later date since WHO is doing this is as important as what they are doing. 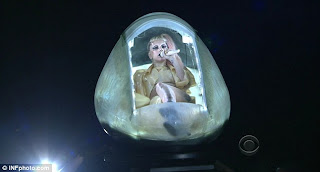 OK, she’s weird. We knew she’d pull something at the Grammy’s and she did. From horned shoulders and face to heads on an organ…and that after arriving in an embryonic egg, or ET space capsule. Whatever it was. Looks like a sci-fi space pod borne by horned Nubian aliens. Ceremonial to the max. 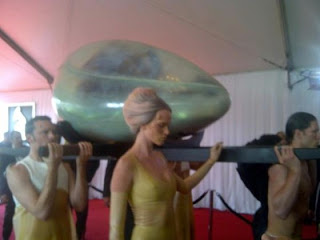 First, Is She Even Her Own Person?

Like all possessed “hosts”, Gaga has moments of normalcy, talking shop or acting like the regular spoiled rock star who just can’t get enough attention, like recently complaining to the press that “people want to see me fail.” (here) But something is terribly amiss with this..uh uh…

The usual pop culture crass promiscuity, transhumanism and occult symbolism is rife in her work. The eye of Horus and Anubis imagery and Masonic and demonic symbolism get featured regularly. All occult Illuminati messages. These are now practically standard fare in the pop music industry. The infiltration and popularization is almost complete.

But Gaga is pushing it further.

Obviously the outrageousness could be considered strictly a strong marketing ploy via outrage and powerful social “statements” and images, as if she’s some kind of avant garde iconoclast. But anyone with even the slightest spiritual sense knows that other forces are at work here, however she’s portrayed.

Those aware of the mind-control aspect of our engineered society, as well as the presence of extradimensional influences, know there’s much more going on here.

Whether viewed through the psychological, occult, ET, vibrational or religious and Biblical framework, she’s loaded. But she’s widely popular.

Therein is the danger. 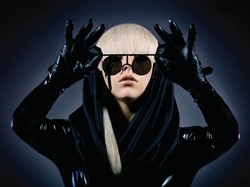 Light up those archetypes, baby…here with the alien reference.   Mind Control Slave?
That she’s apparently another Monarch mind-control product is pretty much a given. Her work is teeming with mind control and fractured personality references.

The telephone video with her headgear is probably her best known giveaway that she’s “connected” to outside controlling sources who can “dial her in” at any given moment.  But there are a lot of other mind control inferences…. 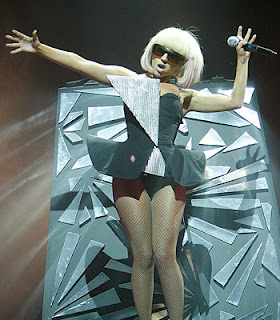 As we know, the music industry is a loaded deck of pre-programmed messages and Disneyesque puppets pumping out spiritually “loaded” products to infect the world with their sorcery. Most people just see “cool” art-like images. How little they know.

Famous mind-control reference with Mickey Mouse symbolism. Notice she’s off-center, as is the photo, as the “alter” personality, while the real person is missing.

This one is particularly disturbing. Look at the red image only—does she have a visitor she’s “entertaining”? Talk about a demon from Hell…. 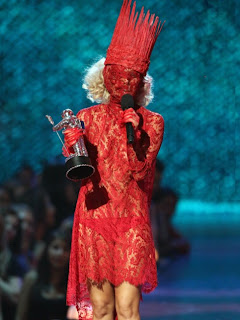 Is Gaga assigned to “push the envelope” to the mainstream?

It’s almost as if she’s revealing a class of hybrid we haven’t “seen” before. There are plenty of strange, bent entertainers over the years in the pop culture who have helped destroy society. The heavy metal industry alone has brought more witchcraft, satanism, destruction and confusion than anyone could measure.

But where is this new creation going? Or is she just manifesting more fully the Satanic Illuminati agenda to a wider audience? 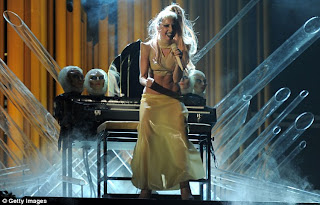 Here at the highly visible Grammy’s she’s not just playing up the outrage. The multiple severed heads image represents the fractured body/fractured multiple personality of the mind control subject. Is she summoning the demons of hell from her occult/fractured organ?

Or Is that a Stargate?

That backdrop is something. Is this geometric tubular formation an allusion to inter-stellar or trans-dimensional travel? This crystalline intersection of energy/transmission light tubes is very otherworldly and possibly implies a stargate, the portal to other dimensions through which entities travel. Sure would make sense. (see below)

When you really push the envelope into hyperdrive something is going to come through. As hard as she appears to be trying to “break through the barriers” (much like the CERN particle accelerator that directors hope to create a black hole through which “strangelets” or something may appear) she may just be carrying a “hitchhicker” or two across the galaxy right into unsuspecting America’s livingrooms.

BTW, this all may sound like self-reinforcing claptrap to some, but the overall “agenda” of the controlling elite and their benefactors is intertwined throughout social programs, science, politics, entertainment, the media and every sphere of our lives. To separate one from the other is to not have the true perspective. Until you truly see the vastness of the “big picture” you will seem to easily find fault with the individual components. Keep looking.

Entranced in virtual shapeshift? Many of her costumes certainly shift perception–what effect does it have?
Obviously a lot goes on with this girl. You don’t play around with stuff like this and not get taken over by influences beyond your control, sorry. And if people don’t realize that, they’re part of the problem.

And if you brouse around all the weird photos you’ll also see not just screwy, suggestive and occult costumes, but pictures of her eyes showing her in very significant altered states, such as the one above, and this one… 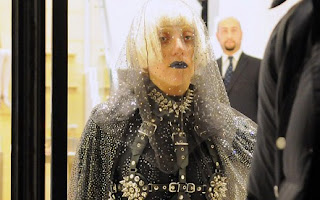 Again. Disturbingly lost and controlled by very dark forces.  What is she really “entertaining”?

A lot of occult influences are being unleashed on society. This Gaga “artist” who is testing the boundaries that seemingly will do anything for “attention” or “self-expression” is an example of just that. As said before, she’s getting the power and influence she’s been seeking, but it’s controlling her. She may or may not know that. Or part of her does.And she’s spreading her chaotic message freely with full media endorsement and backing.  Suspicious? You bet it is. She’s being promoted! You can only imagine why…..

Ordo Ab Chao, or Order Out of Chaos, is the slogan of freemasonry, and the Illuminati elite controllers. First they want to destroy society and bring chaos to as many aspects of our lives as possible. From that they can direct the outcome. It’s been the drama played out for millennia.

This last throe is no different.

The difference with Gaga is not just her confusing, chaotic message, but her range of appeal and influence.
The mental and spiritual images being broadcast are not just innocent tunes or pictures. They unlock doors, invite vibrations and entrain the viewer and listener.  Our children are following this dark freak show. And it’s not just “entertainment”.

Unfortunately, it’s the unwary and uninformed, and most of all the unprotected youth who suffer the most. Although this is a staged shot with the daughter of another mind control enabler, Will Smith, It sickens me to think what this heavily promoted “performer” is popularizing and encoding for our kids and grandkids.
Ultimately, she embodies the fast, chaotic decline of civilization, engineered by the “powers that be”.
Just wondering…at the insanity of it all, Zen