Eugenics Propaganda: Circumcision may be the answer to Aids, says Clinton

Vatic Note: You are not going to believe this one. The chief promoter of depopulation and Eugenics funder, Bill Gates and his wife, probably knows about the aids virus as a bioweapon "for political" purposes, as they accompany the other sell out, Clinton,  to try and sell circumcision to the third world countries. Why didn't they start with the first world countries???

Remember, Rothschild and his battle arm, Israel (Sabbatean Zionists) say they are going to rule the world and the cattle goyim and this is a step in that direction, once again, without firing a shot. They are going to get us to cooperate with slowly enmeshing ourselves into the sabbatean culture just like they tried to get us to do with the illegals.

Add this to the video of Christian Fundamentalists "Worshipping the Golden Calf" (A Biblical Pagan God) outside of Wall Street enmass,  "Praying" to a Golden Calf and the process of inculcation has already begun and is working.  The Fundamentalist Christians are going to be in trouble with God, since they were dancing and praying to the golden calf on Wall Street praying for wealth. The Young Turk was having apoplexy over that one. lol   Its still such gall to do this and take such advantage of these people who are not sophisticated enough to understand the dangers of psychopaths.   Amazing.


Verx Editors Note: I am not circumcised, I just had a son 2 weeks ago that is not going to be either. Do the research. There is NO LINK between Aids and being an intact male. Aids caused by HIV, a virus (VN: A bioweapon). The foreskin actually helps the immune system. We were genetically made to have it for a reason. Even hospitals and baby books admit that there is no benefit to the mutilation ritual. it is simply a cultural & religious phenomenon. 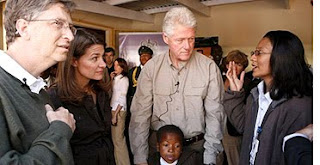 Bill Clinton accompanies Bill and Melinda Gates on a visit last year to patients and staff at a HIV/Aids facility in Lesotho. Photograph: Ralph Alswang/Clinton Foundation

Bill Clinton called for the world to prepare to tackle the cultural taboos surrounding circumcision yesterday if, as many expect, trials show that it protects men and the women they sleep with from Aids.

In a speech to the International Aids conference in Toronto, Canada, Mr Clinton said that if the trials had good results, there would be a major job of persuasion ahead. "Should this be shown to be effective, we will have another means to prevent the spread of the disease and to save lives, and we will have a big job to do," he said. "It is important that as we leave here we all be prepared for a green light that could have a staggering impact on the male population but that will be frankly a lot of trouble to get done."

The problems would be most obvious in India where Muslims are circumcised but Hindus are not, and the difference is associated with religious identity. During sectarian violence, men have been known to pull down each other's trousers as a means of identifying friend from enemy.

In Africa studies have shown that men are willing to be circumcised if it can be shown to be protective against HIV.

There is excitement about the potential for circumcision in preventing Aids. Last year researchers from South Africa and France announced that in a trial of 3,274 men from near Johannesburg randomly chosen either to be circumcised or not, those who underwent the procedure had a 60% lower risk of acquiring HIV afterwards than those who did not.

Three further studies are under way in Kenya and Uganda, according to a report published yesterday at the conference by the Global HIV Prevention Working Group. They are looking at different age groups of men and ways of carrying out the circumcision operation. One of the trials is following 7,000 women in Uganda to see whether they are less likely to get HIV if their partners have been circumcised. The results are expected next year.

The potential for preventing HIV through circumcision was one of the interventions spoken of with most hope in Toronto this week. Mr Clinton also backed opt-out schemes for HIV testing, such as that being introduced in Lesotho. "If it is done right, Lesotho's infection will plummet and more people will live," he said.

He understood the fear of discrimination, which existed when a friend of his died of Aids in the 1980s, "but there is a different equation today".

Some human rights groups are anxious that pressure could be exerted on people to be tested without help and treatment being available. The knowledge to stop the pandemic exists, Mr Clinton said, and must be used.

More than 15 million children in sub-Saharan Africa will have lost one or both parents to Aids by 2010, according to the UN which says the world has failed youngsters. At the launch of a report entitled Children Affected by Aids in Toronto, Michel Sidibe of UNAids said children were "the missing face" of the pandemic. (VN: Then maybe those that developed the bioweapon and spread it around should be arrested and serve serious time in jail)

Reading this makes me sick.
Is there something beyond evil?

If there is, we do not have a word for it. I agree, in all my years on this planet, I have never seen evil this pervasive or horrible. This, added to the other issues we have covered like pedophilia and satanism, makes it clear we are out of our realm.

I just hope and pray the good on the opposite side is as powerful if not more so than this evil.

The one randomized controlled trial into male-to-female transmission showed a 54% higher rate in the group where the men had been circumcised btw.

ABC (Abstinence, Being faithful, Condoms) is the way forward. Promoting genital surgery will cost African lives, not save them.

I don't believe they consider it a distraction once you realize they created HIV for the very purpose it is being used for and that is depopulation, especially of the African continent since its wealth is massive and the robber barons simply want to extract it from them without paying for it. This is the new pattern. Neither Clinton nor Gates give a rats butt about stopping it or curing it or slowing it down, they simply are using the HIV as the reason for doing the MARKING OF THE CATTLE. Its a branding. If they can go global with it, I assure you the Rothschilds will be halfway to their goal of global rule. Simultaneously, they will control and own the land in Africa from such efforts and thus all the wealth and natural resources and slave labor.

Globalizing, I am discovering is not what we thought it was. WE based our idea of the term on the present and what we would under normal circumstances perceive it to mean. Well, this is not the NWO they are thinking about and until we learn to think like them we will never understand what they truly mean.

The results would be a half billion population globally with maintenance of that population through homosexuality and sterilization and pedophilia. These would ensure the population would remain and never get out of hand again.

Its always so much bigger than we think. Remember, THEY DON'T GIVE ONE RATS ASS ABOUT OUR WELL BEING AND UNTIL WE "GET" THAT, WE WON'T HAVE A CHANCE OF BEATING THEM.

If we let this go forward I can assure you we will experience a dark ages, the likes of which the world has never seen before. Ever. That is how bad this is going to get. UNLESS WE DECIDE ITS BETTER TO DIE FIGHTING THEM, THEN TO LIVE THE AWFUL EXISTANCE THEY HAVE PLANNED FOR US. AND THAT IS ALL IT WILL BE, AN EXISTANCE, AND NOT A LIFE. Trust me on this since they plan on us dying after our productive years and that they determined is around 40 give or take a few years.

I am starting a group, and separately a blog called http://nocircplease.blogspot.com/, but i haven't posted as of yet but check it out I will try to publish soon.

Glad to get the word out, you rock!!

Congratulations both for restoring that which is a part of you, but also for your newly found activism to help others. Let us know when you post on the blog.

Blogs are becoming the way we are getting know our world and while we educate, we also learn ourselves about a whole variety of things we had no idea about.

Thanks for sharing and I wish you luck in the activism you have begun and I hope you are able to aid a lot of people in your journey.

Thanks a lot. Here is the link to the blog I started. Notice the flyer I made and posted around my community. They tore down the ones in the public flyer area for some reason (this is the second time that's happened to me, and I think it's a disgruntled person that did it. Here is the link, tell me what you think of the blog and flyer:

Ram, fabulous site and flyer. You are going to do well indeed. You said you sent out other flyers as well, do you have a link to all of them as I would like to see them to try and get this going all over the world, not just here or where you live but everywhere. We have a good base now of return viewers looking for ways to make a difference and this is definitely one of them.

Actually the one I posted in the first blog post below the top one is the only one I've made thus far although I want to create more and post them. u can copy and paste the image on your site or print it out if you like. I'll be sure to post more as I create them.

as you can see I have very little extra space here, however, if you would write up your story for us, I would love to publish it and maybe you can attract other activist who feel the same way you do and I can include the picture in the actual blog which then eats up space within the blog and not outside it.

Come on, do us a favor and tell us your story. We would love to hear it and it may motivate others to do the same in reclaiming that which is theirs.