TRAGEDY: Disarmed California citizens shot dead while 'waiting for cops' in their offices... and now they call for everyone to be disarmed!

Vatic Note:   Well, finally, we have control of our cursor back again,  my computer guy fixed the invasion, so we will see how long it lasts.   Thanks for sticking with  us during this time of trial.  Sometimes, I wonder why I even try to do this , since I feel like only one person in billions on the planet and it gets discouraging, but always you come through for us and that is what keeps us going and may God Bless you for that.

Anyway, this below is the perfect arguement from not allowing gun control.  Its what happens when man is not allowed his God given right to defend his own life and that of his family.   I find it interesting that some of the MSM are finally reporting the news about gun control.  Check out the sources.  Its shocked me to no end.

FUND RAISING STATUS:  This is the date we start our fund raising due by the first of the month.   Our deficit is $350 and we ask that you donate to help keep us up on the net to do the exposing that is so desperately needed.   Thank you for all your support.    You can donate off to the right at the Pay pal button.   God bless you and your family and have a happy, prosperous and safe New Year.

TRAGEDY: Disarmed California citizens shot dead while 'waiting for cops' in their offices... and now they call for everyone to be disarmed!
http://www.naturalnews.com/052181_San_Bernardino_shooting_gun_control_self-defense.html
by: J. D. Heyes, Natural News,  December 2, 2015 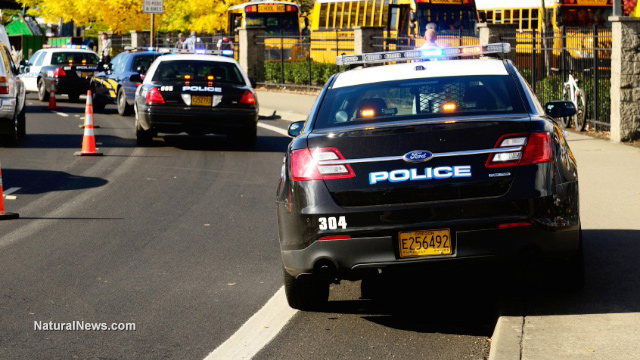 NaturalNews) As I write this news about another mass shooting is unfolding, this one – like past shootings – took place in what is essentially one massive gun-free zone: the state of California.

According to early reports – and they are preliminary, so let me just make that caveat up front – police say "one to three" "heavily armed suspects" with military gear and concealed faces began shooting at a San Bernardino developmentally disabled institution, the Inland Regional Center (initial reports said an office holiday party involving San Bernardino County workers was being targeted). Several people have reportedly been shot, some killed, and – again, as of this writing – the suspects, who were reported to have escaped in a black SUV, are still at large.

I have to say this shooting is particularly suspicious for a number of reasons, not the least of which is because it is one of several now that have occurred in a very short window of time, and one of three that have occurred after our president vowed to make every one of these kinds of mass shootings "political" in nature – all to push for more gun control on the American people, the Second Amendment be damned.

But all of that aside, what's really important to note here is that, yes, this is another shooting that has taken place in a state and community where defending yourself with the most effective means available – a firearm – is essentially banned.

And what's more, once again the victims and potential victims at the scene ironically – nay, hypocritically – begged and "prayed" for people with guns to show up and save them.


Unarmed, vulnerable people waiting for other people with guns to save them

As reported by the Los Angeles Times, one father received a text from his daughter that read, "Shooting at my work...pray for us."

And another tweeted, "Somebody is shooting inside our building...I'm hiding in a closet."

And USA Today tweeted, "About 150 cops swarmed the area of the shooting..."

Hiding in closets, praying and waiting for armed police – heavily armed, in fact – to arrive. Maybe they'll get there in time, but – for far too many – they didn't. And they never do. Like the old adage goes, "If you've got an active shooter just a few feet away from you, don't worry; the police are only five minutes away." Which is, of course, far too long.

But you wait and see what will happen after this latest shooting. Lemmings – including many who were either victimized or were at risk of being victimized – will repeat what the president will say, that more of our honest, law-abiding, Constitution-following citizens should be disarmed in the face of threats by armed criminals who don't have any intention of following new gun control laws.

Per San Bernardino Police Chief Jarrod Burguan, the gunmen "came in with a purpose." Of course they did; gunmen who want to kill always do – to kill. So what good will it do to create more victims?


How many more victims, Mr. President?

Case in point: Paris, Nov. 13. While it is not illegal to own certain kinds of firearms in France, gun laws are restrictive and in any event, you can't walk the streets of Paris concealing a gun. In fact, French police were unarmed, and it's illegal to own "weapons of war" or semi-automatic look-alikes such as the AK-47s and similar firearms that ISIS terrorists were carrying. And yet, they got them somehow and used them to kill 130 people. Get the point?

Obama won't, and neither will Gov. Jerry "Moonbeam" Brown, another Democrat who, like the president, is too ideologically wedded to the idea of complete government control over our lives (and our ability to act independently of government assistance, which the Second Amendment surely enables us to do). Instead they will politicize, again, this latest tragedy to continue trying to convince us that Paris-style gun-free zones and overly restrictive gun laws will keep us safer in the face of armed and determined criminals.

So the question becomes, Mr. President and Mr. Governor: How many more Americans must die before you get it? How much more blood on your hands do you need before you understand the futility of your position?