Vatic Note:  I have always known about natural products as cures as presented below.  Why?  Because I have been a Chiropractic and natural remedies user for 35 years and I am healthy as a horse, but I do get sick sometimes and use Natural remedies to heal with.  It is the same with organic tobacco, I have been on organic tobacco for sometime now and I am now able to go without a cigarette for at least three to four hours and that has never happened before.

I have gone that long before, but always suffered from the forced withdrawal.  With the Organic Tobacco, I actually forget to smoke. So I have no physical stress when I do without tobacco for several hours.   I am always surprised when I am busy and realize I had not stopped for a cigarette for hours, then if I have one after that, it satisfies me for a long time before I have to take another one.

When I counted on others to help me quit, it never worked because the aid was usually from someone who never smoked or someone who perceived smoking as a weakness of character.  The "JUDGEMENT" got in the way of the "CARING" and thus "no help in quitting".   I realized then I had to do it alone with the help of God, and that took a  lot more time.   I found that God was a lot more patient, understanding and forgiving than anyone who had ever tried to help me quit.

Coffee has never been my big addiction, rather the cigarettes were the problem, but I am glad to know about this becuase if they manage to extract the key elements out of the coffee bean, it might be able to be used to quit smoking.  Now what a blessing that would be.   In the meantime, for anyone else, this is a blessing for so many other things that it would be a shame to waste such aids in throwing them away.  It would be better to extract what is needed and use it to help others heal.  I hope Spain in successful in their attempts to create a way to extract the beneficil elements from the coffee.

FUND RAISING STATUS:  This date of the 15th is the date we start our fund raising due by the first of the month.   Our deficit is $100 and we ask that you donate to help keep us up on the net to do the exposing that is so desperately needed.   Thank you for all your support.    You can donate off to the right at the Pay pal button.   God bless you and your family and have a happy, prosperous and safe New Year.     Thanks for all your support up to this point and God bless you and your family.


(NaturalNews) The components of coffee beans that are typically discarded are 500 times higher in antioxidant activity than vitamin C and serve as powerful prebiotics and antimicrobials, according to a study conducted by researchers from the University of Granada that was published in the journal Food Science and Technology.

The byproducts of roasting coffee beans and brewing coffee amount to more than 2 billion metric tons each year. These byproducts include the silverskin -- the outer layer of the bean, which is removed after drying -- and the coffee grounds, which are generally discarded after brewing.

In the new study, the researchers sought to determine whether these "waste" products might have any nutritional uses. 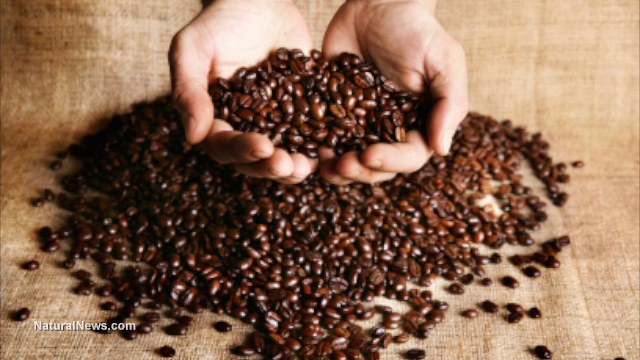 Coffee grounds are already used for several purposes, albeit mainly on the small scale. They can be used as fertilizers for certain soils as well as for homemade exfoliants or abrasive cleaners. Nevertheless, nearly all coffee grounds are disposed of in landfills, and nearly all silverskins are also treated as waste.

"They also contain high levels of melanoidins, which are produced during the roasting process and give coffee its brown color," lead researcher Jose Angel Rufian Henares said.

"The biological properties of these melanoidins could be harnessed for a range of practical applications, such as preventing harmful pathogens from growing in food products," Rufian Henares said.

Coffee grounds and silverskins are not edible, so their potential likely lies in finding a way to extract the antioxidants found in them and adding them to other foods. This might be essential for the prebiotic potential found in the coffee byproducts because melanoidins are so antimicrobial that they would counter these prebiotic effects.

"If we are to harness the beneficial prebiotic effects of the coffee by-products, first of all we need to remove the melanoidins," Rufian Henares said.

The researchers also found that including sugar during the roasting of coffee beans increased both the antimicrobial and antioxidant activity of the "waste" products without reducing prebiotic activity.

The Spanish Ministry of Economics and Finance has allocated more resources to the researchers to continue their studies. The scientists hope to find way to recycle coffee byproducts as food ingredients, thereby boosting the nutrient content of foods while reducing the environmental impact of the coffee industry.


Coffee benefits without the risks?

The study is significant, partly because it suggests that people might be able to reap some of the health benefits of coffee consumption without actually drinking the caffeinated beverage. This is especially important for people concerned that caffeine consumption might cause or worsen a condition known as adrenal fatigue.

Adrenal fatigue refers to a cluster of fatigue-related symptoms said to be caused by overstressed, poorly responsive adrenal glands. In addition to directly reducing people's quality of life, adrenal fatigue is also believed to threaten their long-term health.

"The hormones produced by your adrenal glands, particularly the stress hormone cortisol, play an important role in regulating your immune system," writes The Adrenal Fatigue Solution author and wellness coach Fawne Hansen at Adrenalfatiguesolution.com. "If your cortisol levels go too low or too high, this can lead to regular infections, chronic inflammation, autoimmune diseases or allergies."

The term "adrenal fatigue" was coined in 1998 by chiropractor and naturopath James M. Wilson. Wilson notes that people suffering from adrenal fatigue might need to rely on coffee to get out of bed in the morning, but he does not suggest that caffeinated beverages can cause the condition. However, other writers such as Hansen warn that the adrenal glands can be stressed by constant caffeine consumption, thereby inducing adrenal fatigue.