Vatic Note:  Here is another false flag, but then most of us knew it when we heard it.   As we have stated numerous times,  "They cannot complete their agenda until they get our guns".   That is a critical factor in all of this planning and subsequent agenda.

What is satisfying about all this, is the fact that these false flags are being exposed faster and earlier than in the past, so their effectiveness is waining..... even the left is beginning to question all of this.  I know, since I have readers on both the left and the right.

The perpetrators are getting sloppier and sloppier in their manipulation of the crime scene, which is what this is.  A false flag is a crime of fraud and if anyone truly gets hurt, or killed, its a death penalty crime scene.  9-11 falls into that category, and it is obvious from all the evidence including behaviors of the perps which we call "The dancing Israeli's" who were arrested and then sent back home to Israel.

Read this and see what you think, then you decide.   I, personally, have no douct that this was a false flag to get our guns.  Fortunately, every time they do one of these,  guns sales rocket sky high, so its having the opposite affect on the general population, who are waking up in record numbers.


FUND RAISING STATUS:  This date of the 15th is the date we start our fund raising due by the first of the month.   Our deficit is $100 and we ask that you donate to help keep us up on the net to do the exposing that is so desperately needed.   Thank you for all your support.    You can donate off to the right at the Pay pal button.   God bless you and your family and have a happy, prosperous and safe New Year.    Thanks for all your support up to this point.


San Bernardino shooting has all the signs of a staged government operation or ISIS terror attack (from what we know so far)
http://www.naturalnews.com/052180_San_Bernardino_shooting_ISIS_terrorism_government_operation.html
By Mike Adams, the Health Ranger, Natural News, December 2, 2015 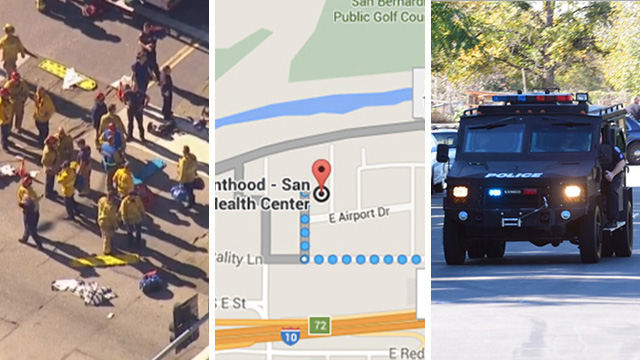 (NaturalNews) It's early in the news cycle on this story, so everything stated here may be subject to new information as it becomes available, but from what we know so far, the shooting in San Bernardino appears to be either a staged government false flag operation or an ISIS terrorist attack (VN: which is  basically the same thing.... LOL  After all ISIS is a creation of the khazars of Israel doing their function of trying to start WW III between the Christians and Muslims, as recommended by Albert Pike in 1871. He recommended the 3rd WW to have the Muslims and Christians kill each other off, leaving the Zionist satanist left standing to control the globe.).

From what we know so far, this does not resemble in any way a "lone gunman" or an angry gun owner targeting someone he hates. The attack took place at the Inland Regional Center, a company that helps disabled people improve their lives with training, self-improvement counseling and more. No lone gunman shoots up a building full of disabled people.

UPDATE: We now know that LA police used the same building targeted in today's attack as a stage for active shooter drills carried out every month! As they police raid began, one staffer from inside the building actually tweeted, "drill started."

Breitbart.com is carrying live updates at this link, and PJMedia is also covering the story here.

Jon Rappoport from No More Fake News is also pointing out this key fact about this being based on a "training exercise":

“The call first came in at 10:59 a.m. of multiple shots fired from the area of 1365 S. Waterman Ave., San Bernardino Police Department Lt. Richard Lawhead said. The department’s SWAT team was training nearby and was suited, ‘ready to roll’ and responded rapidly, Lawhead said.”

—Yet another mass shooting where, by chance, a training exercise was going on during or prior to the event.

Here is a recent article I wrote about mass shootings paralleling training exercises:

Training exercises dovetail with mass shootings What are the odds?

According to eyewitness reports, this shooting was carried out by "three white males dressed in military gear."

They were highly organized, too. They carried out the shooting and then fled in an awaiting vehicle which has not yet been found.

This has every sign of being a planned, professional operation, carried out for a specific political purpose. And that leaves just two likely explanations from what we know so far (this could change when we learn new details, of course):

Possibility #1) This could be a staged government false flag shooting, carried out in a desperate attempt to paint gun owners as so cruel and evil that they would even murder disabled people. The end game of this? Nationwide gun control, of course. Obama needs a justification to issue an executive order criminalizing gun ownership among citizens (which will set off a civil war, by the way).  (VN:  my research shows that is true..... gunowners see the confiscation of their weapons as the first step in their undefended demise by the powers that be and they would rather go down fighting than to ever live under such dictatorship, especially that which is "Satanic" in nature.)

Possibility #2) This could be an ISIS terrorism attack, carried out by ISIS operatives dressed in military gear. ISIS, of course, has promised to attack America just as they recently attacked Paris. The Obama administration (and nearly all democrats) has turned a blind eye to the very real threat of ISIS crossing open borders to occupy America the way they occupied France. Any person critical of ISIS has been ridiculously labeled an "Islamaphobe" by the insane leftist media which lives in a fairytale land of delusional denial about open borders and national security.  (VN: this is NOT a possibility, its simply a version of the first possibility since ISIS was created by the same khazar islamaphobes who did 9-11 trying to get Muslims and Christians to hate each other.  THE OBJECTIVE HERE IS TO DIVIDE THIS NATION SO WE LOSE WW III JUST LIKE WW II AND WW I, WHERE RUSSIA AND GERMANY LOST THE WARS AFTER A REVOLUTION DIVIDED THEIR NATION.) I do know for a fact that people were killed. SOme realtor friends of ours knew 7 of the dead victims. Also the following Tuesday my husband and I were supposed to go to our monthly network meeting in that same room. Now the meetings are being held in a different city entirely. The whole event is suspicious though, and no doubt a false flag. Just wanted to say people really did die there, though.
I like your site. Glad to have found it.