***Fundraising status - We are still at a deficit of $140 needed by the first of July.  We ask that if you have benefited in any way by our work, and can afford it, that you please help us reach that goal before the first of July, by donating anything you can to our efforts, at the pay pal button off to the right of the blog.  God bless you all who have supported us for these past 6 years.   We are eternally grateful for that gracious support both financially and encouraging us on our path of truth seeking.
There is definitely no question that we live in very very interesting times.

Vatic Note:  I agree with the author in this write up.   When ever a reporter begins to report the truth, and begins to research, then he is done away with by these evil satanic ones,  to not only silence them, but more importantly to send a message/warning to other brave reporters who intend to speak truth about the foreign infiltrators of our government.

This is typical of an emerging police state.  When Homeland Security was created after 9-11 ".......which terrorist act was good for Israel", according to Netanyahu,  I immediately began going back in time and researching WW II and the establishment of the "STORM TROOPERS" in Nazi Germany and the parallels were spooky.  Check it out yourselves.

Lets review some of these facts.... we all know, the ADL works for Mossad in the USA.  They don't even try to deny it.   Then the SPLC is the propoganda arm of the Israeli contingent here in America.  Both now sit on the citizens advisory board of the Homeland Security here in the states.  How did they rate such a position which is clearly forbidden by the Constitution, and I believe you can read that in Article 8.  I will have to check and confirm that for you.

Further,  at around the same time as this creation occurred,  ADL and SPLC were training American Law Enforcement to protect against AMERICANS who these Israeli dupes said were "DOMESTIC TERRORISTS"  and who were these people?   Constitutionalists,  Christians (remember, these same khazars slaughtered millions of Christians when they violently took over Russia.), Ron Paul Supporters,  Chuck Baldwin supporters, etc.   So, here they were setting up the United States for the same treatment as they did in WW II and lets also remember who the real perps were in WW II. http://www.realjewnews.com/?p=637

It is not news to us that Israel has used assassination as a weapon against America....their favorite technique is airplane crashes, like they did to Brown in the Clinton administration.   JFK, JFK Jr.,  Wellstone,  Gov STevens, etc are leading examples of such mossad techniques for assasinations, 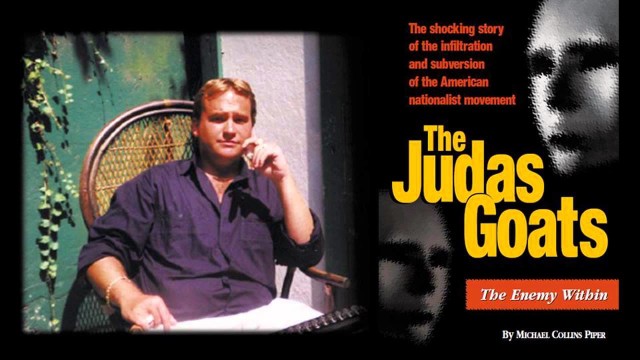 Two days ago, Michael Collins Piper, aged 55, died in a hotel room.  Collins led the war against AIPAC and the ADL and the Kosher mafia when others now considered “experts’ knew nothing at all.  News quickly spread about his “heart condition” and how he died of natural causes.  Then again, Abe Foxman is still  alive and Netanyahu’s attic portrait is oozing hideousity.

I believe Piper was likely murdered.  Moreover, I also believe his heart condition was induced as well.  I believe this for reasons, reasons like Michael Hastings and John Wheeler and John O’Neill and Serena Shim and Mike Ruppert and Gary Webb and Roland Carnaby.  (VN:  these were all killed by the cabal for exposing the truth about the khazar Zionist bankers)

I believe it when I find someone who had become vulnerable, an easy target and easy “example”, and someone having a Wikipedia done by the Mossad like the one below:


Michael Collins Piper is a political writer, conspiracy theorist,[1] and talk radio host living in Washington D.C.. He is a regular contributor to the American Free Press, a newspaper backed by Willis Carto noted for its antisemitism, White separatist and White nationalist themes.

Piper’s books and articles have also been featured by a wide-ranging and eclectic variety of websites, ranging from “left” to “right” including America First Books, anti-SemiticVeterans Today, PressTV, the racistneo-naziVanguard News Network and the website of Holocaust denierDavid Duke.

Piper was described on his website as a political “progressive in the LaFollette–Wheeler tradition.”[2] He is the author of books such as The High Priests of War, in which he criticizes the neoconservatives in the Bush administration, and Final Judgment, where he claims that the IsraeliMossad was responsible for the assassination of U.S. PresidentJohn F. Kennedy.

He has been attacked by many Jewish groups such as the Anti-Defamation League (ADL) of B’nai B’rith, the Simon Wiesenthal Center, and the Middle East Media Research Institute (MEMRI), some of which have called him a promoter of antisemitic conspiracy theories and a Holocaust denier.[3]

(VN:  I find it interesting that the Khazars have said time and time again, they love the term anti-semitic, since it keeps the attention away from what they are doing, while focusing the press attention on enemies of the Khazars by calling them anti-semites..... when the khazars are anything but semitic.  They are not semitic either by DNA or by religion. What they are are people who hate Christians,  Muslims and Jewish.  Why?  Because all three reject satan and preach a "moral course to be followed through life, in all relationships, including personal, political, social and adversarial.  That does not make any of those 3 subject to love and affection by the khazars, and that is a fact.)

Carefully timed to his death is a distasteful concerted attack on him in Wikipedia that traces back to Israeli intelligence.  Those who produced this smear/bio, well outside any Wikipedia guidelines are also regularly tied to cover ups like Charlie Hebdo, the Boston Marathon bombings and Sandy Hook.


It is best to assume Piper was murdered.  He was a target, he was living in a hotel in Idaho, he had been living in a cabin but it was “accidentally” burned down.  This put him in a hotel where his body could be conveniently found.

I’ve been to this dance before.

Let’s take the Wikipedia alone.  114 contributors did this smear job, most of them don’t exist, dead IP addresses, here is one of them:

This is an admitted “Israel lover” who smeared Michael Collins Piper but Wikipedia put the work of an admitted psychotic out of reach, sanctified though it violated every tenet of whatever standards Wikipedia claims to have.


Attempts to add substance or balance to the Wiki were immediately removed but the garbage stayed, on a page that is earmarked to be continually monitored but one where there is no mention of controversy nor is there any question of the wild and unsubstantiated libelous insanity it carries.

We might want to take a second or two to discuss Wikipedia.  Were it not for an army of Tel Aviv and Haifa housewives who work off their welfare payments writing smears and playing the toad in chatrooms and comment boards, the rest of Wikipedia is quite something.

Michael Collins Piper was culled from the herd, killed because he had no support, no powerful friends and a shrinking following.  Collins, Bollyn and others worked for Willis Carto, a man who got much very right, by my estimation at least, and some things right also, but things I am not so comfortable with.  As a sanctified “Northern European” who actually visits real places, there is a reason that Norwegians, Swedes and Germans are often quite miserable people.

Anyone who thinks they know Germany who calls it by that name, “Germany” obviously knows nothing at all about a nation stuck together less than 150 years ago.  My grandmother was born in “Germany” when that nation was one year old.  When we don’t know history, we make it up.


Is there  “Jewish conspiracy” and did the holocaust really happen?  No sane person doubts a “Zionist conspiracy” and, as for the holocaust, based on the efforts to silence any investigation, scientific or otherwise, I think we know where that one is going.
Collins is dead.  They will murder more, but let them head into Lebanon first and meet with Hezbollah again.

Gordon Duff is a Marine combat veteran of the Vietnam War.He is a disabled veteran and has worked on veterans and POW issues for decades.

Gordon Duff is an accredited diplomat and is generally accepted as one of the top global intelligence specialists.He manages the world's largest private intelligence organization and regularly consults with governments challenged by security issues.

Gordon Duff has traveled extensively, is published around the world and is a regular guest on TV and radio in more than "several" countries.He is also a trained chef, wine enthusiast, avid motorcyclist and gunsmith specializing in historical weapons and restoration.Business experience and interests are in energy and defense technology.

Visit Gordon Duff's YouTube Channel
The article is reproduced in accordance with Section 107 of title 17 of the Copyright Law of the United States relating to fair-use and is for the purposes of criticism, comment, news reporting, teaching, scholarship, and research.
Posted by Vatic Master at 1:30 AM