Germanwings crash: Not the full story?

Vatic Note:  Another exposed false flag.   You would think with all these practice false flags, these Khazars would be experts at it, and yet, they flub it every time.  Worse, it sounds like a set up to me, without regard to the damage such slander lays upon the family of the co-pilot.  ARE WE SICK OF THIS CRAP YET???  WE SHOULD BE GETTING DAMN CLOSE.

I think that bothers me as much as the actual loss of life bothers me; the incredible lack of caring of the pain and suffering of the man's family and friends who supported him due to the Khazars' manipulation and agenda. Its bad enough he lost his life, but his children and family will be taunted by others for his being responsible for all those other deaths.  What a crime that is.

After reading this below, the various elements below became obvious to me that it was no different than other false flag air accidents such as the Wellstone crash that killed a Senator that could not be bought off.  We did a blog on that one way back when.  We also did a blog on the accidental crash of JFK Jr who announced his run against Hillary Clinton for US Senate seat in NY.  How convenient. 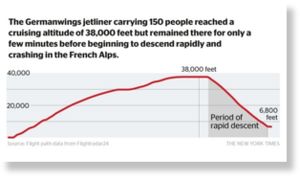 When I heard about the crash of Germanwings Flight GWI9525 in the French Alps on the morning of March 24th, I was shocked, but to be honest, not that shocked. It's not that I expected it to happen, but this was the fifth such incident in the last year. If that frequency is maintained, the statistically-very-low chances of meeting an untimely end on a commercial flight will have to be recalculated.

In the immediate aftermath of the crash I, like many others around the world, waited patiently for the details. What could possibly cause a modern, albeit a little aged, first-generation Airbus A320 to suddenly drop out of the sky and slam into a mountain side? I had a few theories, among them the incapacitating effects of an 'EMP' from an exploding overhead space rock. The shocking rise in fireball/meteorite sightings over the past 10 years makes this plausible, and might well have been the cause of the crash of AF447 into the South Atlantic ocean in 2009. But I waited, and I expected to wait because investigations of this sort can, and should, take quite a while to complete.

When dealing with airplane crashes, the most important information, even more important than the cockpit voice recordings, is the Flight Data Recorder (FDR) or ADR (Accident Data Recorder). The FDR records instructions sent to all electronic systems on an aircraft, including the auto-pilot and the security system for the entry to the cockpit.

Whatever information might be provided by the conversation between the pilot and co-pilot in the cockpit would have to be corroborated or confirmed by the hard data from the FDR. Analyzing this data naturally takes several days or weeks, so it was surprising that, within 24 hours of the crash, the New York Times had cited an unnamed "senior French military official" as saying that one of the pilots was locked out of the cockpit by the other and that was what caused the crash. The NY Times quotes the military official:


"The guy outside is knocking lightly on the door, and there is no answer," the investigator said. "And then he hits the door stronger, and no answer. There is never an answer. You can hear he is trying to smash the door down. [...] what is sure is that at the very end of the flight, the other pilot is alone and does not open the door."

The precipitous release of this information appears to have undermined the official investigation that is being conducted by the French 'Bureau of Enquiry and Analysis for Civil Aviation Safety' (BEA) a civilian, not military, agency of the French government responsible for investigating aviation accidents, and established a narrative that has become the official truth of what happened to the plane - it was deliberately crashed by co-pilot Andreas Lubitz.

As the NY Times went to print on Wednesday, the head of the BEA was giving a press conference that was rightly cautious. BEA head Remi Jouty told reporters that while the CVR had yielded sounds and voices, there was not the "slightest explanation" of why the plane crashed and that days or weeks would be needed to decipher them. "There's work of understanding voices, sounds, alarms, attribution of different voices," he said.

Despite this, one day after the premature conclusions of the military official as revealed by the NY Times and the cautious comments of the BEA chief, public prosecutor Brice Robin agreed with the military official's conclusion and decided to open a criminal prosecution case, saying: "the intention was to destroy the plane". This is a disturbingly premature approach for a public prosecutor to take and it makes us wonder if someone wanted to quickly establish a narrative that would become the official story rather than wait for the results of a thorough investigation. Indeed, the act of declaring the crash a criminal case means that the investigation will no longer be primarily conducted by the BEA.

Whether or not a full investigation by anyone can even take place has, however, been thrown into doubt with conflicting stories about the all-important second "black box" or Flight Data Recorder. In the same story where it first published the comments by the French military official that established the "suicide co-pilot" narrative, the New York Times claimed that the second black box housing the FDR had been found but the data card containing the information was missing. More recently, official sources in Europe have said that the FDR box itself "may never be found". I have to say, that's a little too convenient for my taste. 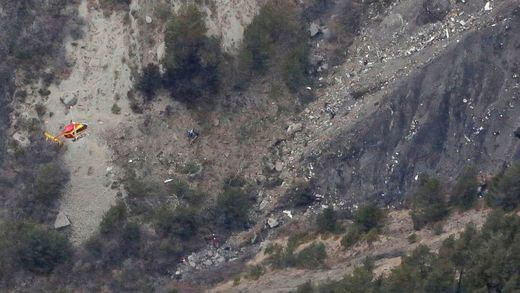 Wreckage from the crash. The plane virtually disintegrated.
After the initial release of the basic information from the CVR about the "voices" and "lock out" from the cockpit, further details have been added and the story fleshed out by the mainstream media, with some pundits going so far as to 'imagine' what the pilot was thinking. Chief reporter for the UK Telegraph Gordon Rayner, for example, mused:

Amid this navel gazing, scant media coverage has been given to the eyewitnesses who heard an explosion and saw smoke coming out of the plane shortly before it crashed. A helicopter pilot in the French Air Force based in Orange, 30 minutes away from the site of the crash, said that the French Air Force had received a number of corroborating witness testimonies on this point. He also confirmed that debris was found upstream from the crash site - which he said confirmed the fact that the piece of fuselage had "been detached from the aircraft before impact".

But the mainstream media rumor mill was already in full flow, and in the space of four days, co-pilot Andreas Lubitz went from an enthusiastic, outgoing young aviator with no sign of depression and dreams of becoming a long-haul flight captain, to a raging narcissistic depressive with a vision problem and a homicidal death wish, and 'evidence' taken from his house to back it up.

One of the major pieces of data used to justify the "suicide pilot" story comes from the alleged CVR recording where, we are told, Lubitz's 'breath' can be heard. This claim has been directly contested by Gerard Arnoux, an 18-year Air France captain and spokesperson for the national monitoring committee on aviation safety, who appeared on 'Le Grande Journal' two days after the crash. Arnoux stated that there were three errors in the official story:

1) It is not possible to hear a pilot's breath on the CVR. Arnoux states that the cockpit of 1st generation A320s are very noisy, so much so that, in flight, pilots had to use headsets to speak to each other. The idea that the CVR could pick up Lubitz's breath with so much ambient noise is not possible, according to Arnoux.

2) The official story claims that investigators heard the 'beep' of the knob that Lubitz used to start the plane on its descent. Arnoux states categorically that this knob makes no sound.

3) Arnoux also wonders why no mention was made by investigators of hearing the loud strident beeping made by the cockpit door console when the emergency access code is entered to open the cockpit door. Arnoux recognizes that the emergency unlock code could have been overridden by someone in the cockpit manually holding the lock button down, but this would not have prevented the beeping once the code was entered outside.

This would have been the clearest confirmation that one of the pilots had been locked out. Yet no mention was made of it. Instead, we are asked to accept the word of those privy to the CVR that someone was "banging on the door" and shouting "open the damn door". And with all that ambient noise in the cockpit too. They must have very good hearing.

It is interesting to hear the response to Arnoux's comments from another member of the panel on the show. He says "so why would the public prosecutor disseminate false information? Are they hiding something?" The response from the others is that he must simply be "misinformed"...

In terms of the way this 'investigation' has been handled, it bears similarities to the case of Egypt Air Flight 990. That crash was most likely the result of an anomalous weather event that proved too much for the mechanical constraints of the aircraft, but from Boeing's point of view, a "suicide pilot" is a much more financially-appealing explanation, so they went with that and opened a criminal investigation, much to chagrin of the Egyptian authorities.

My heart goes out to all the families of the victims of this crash, but I feel particular sympathy for the family of Andreas Lubitz. Not only have they lost a son and brother, but their memories of him will be forever tainted by the character assassination currently underway in the mainstream media that always prefers a dramatic Hollywood-style story to a sober and honest investigation.

N. Ireland born, bred and fled, Joe is a researcher, editor and writer at Sott.net
The article is reproduced in accordance with Section 107 of title 17 of the Copyright Law of the United States relating to fair-use and is for the purposes of criticism, comment, news reporting, teaching, scholarship, and research.
Posted by Vatic Master at 2:00 AM