Vatic Note:  Alright, some of the system is still working.  Yahooooo...... Keep those good thoughts coming.   Keep working on preparation and organizing, and preparing your equipment, but hopefully we never have to finish doing so.  Hopefully that organization will file a class action law suit for the citizens of Missouri.  If the judge there rules as the one in New York did, then we are home free.  Then we pick up our marbles and never, ever allow this to happen again.

We change all the negative social engineering that has been in place since the 50's that allowed this to happen to us.  We are responsible by remaining ignorant of what tyrants can do when we are not vigilant.  First stage would be to get MTV off the air,  do away with digit TV sets, go back to analogue, bring our schools back under the jurisdiction of local school boards.... and begin teaching our children higher values such as truth, justice, fair play, etc ALSO MAKE ETHICS, CIVICS, & GOVERNMENT/CONSTITUTION AND BILL OF RIGHTS, part of the school curriculum.

Finally REMOVE ALL IPODS FROM THE HOME. 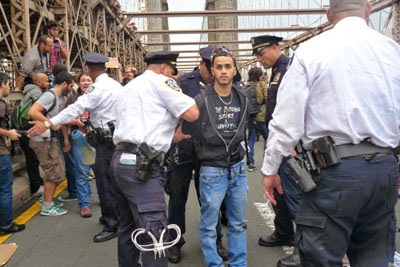 In a major victory for free speech rights, the U.S. Court of Appeals for the Second Circuit issued a ruling today denying the City of New York’s effort to dismiss the lawsuit challenging the NYPD’s mass false arrest of 700 Occupy Wall Street demonstrators on the Brooklyn Bridge in October 2011.

The class action lawsuit was filed by the Partnership for Civil Justice Fund, a non-profit public interest legal organization, within days of the mass false arrest. The case Garcia, et al. v. Bloomberg, et al., 11 Civ. 6957 (JSR), was argued before the Second Circuit in April 2013.

Carl Messineo, Legal Director for the Partnership for Civil Justice Fund and attorney for the protestors, said: “This is a major victory upholding the fundamental constitutional rights of people to engage in First Amendment-protected activity in New York City without being trapped and detained, and unlawfully arrested.”

Mara Verheyden-Hilliard, Executive Director for the Partnership for Civil Justice Fund and attorney for the protestors, said: “The decision by the NYPD high command to illegally trap and arrest 700 peaceful protestors was a disgrace. It is one of the largest mass arrests and mass violations of civil liberties in U.S. history. This is a critical victory for justice and the right to dissent in America.”

“The NYPD command officials executed a mass false arrest. They knew they had to warn protestors, but they chose to use one tiny bullhorn for a march that stretched for blocks on end. Then, they turned and led marchers across the bridge. As the District Court found, this was an implicit invitation to follow, and, as the Second Circuit observed, protestors predictably followed them across. This ruling allows us to proceed to secure justice for their actions,” stated Carl Messineo.
The article is reproduced in accordance with Section 107 of title 17 of the Copyright Law of the United States relating to fair-use and is for the purposes of criticism, comment, news reporting, teaching, scholarship, and research.
Posted by Vatic Master at 3:01 PM