Legal battles over reporting on mustang roundups in Nevada


Vatic Note:  Well another Government Freedom of the Press Restriction upheld by courts with respect to the BLM, round up of Mustang horses in Nev. Gradualism is in full swing in off the wall and out of the way places where  most people are not expose to such issues.  Its a clever way to begin further erosion of the freedom of the press.  That does not bode well for the alternative press either on other issues that could arise.

To retain your freedoms and liberties you must remain vigilant, especially now when its breathing  done your neck with tyranny.  Stand up when it happens or you won't be able to stand up when they chip you or incarcerate you when you refuse.  See how easily this can move into a larger agenda? 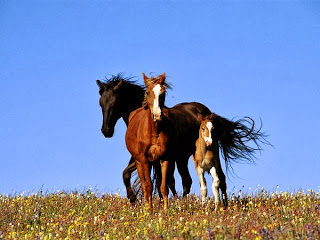 Reno, Nev. • The Reporters Committee on Freedom of the Press says the U.S. Bureau of Land Management is using safety concerns as an excuse to limit media access to wild horse roundups across the West in violation of the First Amendment.


The National Press Photographers Association and more than a dozen newspaper companies joined the committee in a friend-of-the-court brief filed in the 9th Circuit U.S. Court of Appeals late Monday to back an advocacy group waging a series of legal battles over mustang roundups in Nevada.

Horseback Magazine photographer Laura Leigh and others "have a right to see what happens" during the roundups, the media groups said, urging the court to be "highly skeptical of assertions by the BLM that restrictions placed on media access were done for administrative convenience and/or to satisfy safety concerns."

"People in an open society do not demand infallibility from their institutions, but it is difficult for them to accept what they are prohibited from observing," they said.
The 9th Circuit sent the case brought by Leigh’s advocacy group, Wild Horse Education, back to U.S. Judge Larry Hicks in Reno last year to determine if the BLM limits are constitutional.
Hicks ruled in 2011 that a balancing of the interests of the agency and public access to a roundup in Nevada didn’t warrant granting an injunction to block the gathers. But a three-judge panel of the appellate court ruled he failed to determine whether those restrictions violated First Amendment protections.
"When the government announces it is excluding the press for reasons such as administrative convenience, preservation of evidence, or protection of reporters’ safety, its real motive may be to prevent the gathering of information about government abuses or incompetence," Appellate Judge Milan Smith Jr. wrote in the 18-page opinion in February 2012.

BLM spokesman Tom Gorey said Tuesday that the agency had no comment on the latest filing. Agency officials testified at a hearing earlier this year that they do their best to provide public access to the roundups and temporary holding of the animals and denied Leigh’s claims she was singled out to be kept away from the mustangs.
The National Press Club, Nevada Press Association, Reno-Gazette Journal, The Seattle Times Company, the Las Vegas-Review Journal’s owner Stephens Media and others joined in the new brief arguing that journalists routinely face far more dangerous assignments, especially at war. They say reporters should have the same unrestricted access to public rangeland as they do to battlefields.
BLM’s concerns are "speculative at best and at worst are overly broad and ambiguous, often arbitrarily and capriciously chilling visual journalists’ ability to cover matters of public concern," they said.

"If they are willing to assume such risks in a warzone, it should certainly be considered that such safety concerns by the government are nothing but mere pretext when it comes to horse gathers ... BLM land is more akin to an open park than a battlefield, and a horse gather is less dangerous than open combat or fires, floods, explosions and other calamities where safety concerns are at stake."

Hicks said during a hearing earlier this year that he recognizes it’s an issue that "strikes deeply in people’s emotions and interests."

"I also recognize the government is placed in a difficult position. It seems no matter what they do, they are going to be subject to certain controversy and challenges," Hicks said.

The journalists said Hicks effectively "rubber stamped" the government’s assertion that the observers were allowed reasonable access even though they were prohibited from witnessing certain aspects of the gather. They said courts routinely have ruled that such limits are illegal when it comes to keeping TV cameras out of courtrooms or prohibiting videotaping of police activities.
The article is reproduced in accordance with Section 107 of title 17 of the Copyright Law of the United States relating to fair-use and is for the purposes of criticism, comment, news reporting, teaching, scholarship, and research.

The MediaNews Web sites (the “Sites”) contain material that is protected by copyright, trademark and other intellectual property laws. Unless otherwise specified, the Sites and all content on the Sites are intended for your personal, noncommercial use only. You may not modify, copy, reproduce, republish, upload, post, transmit or distribute in any way any material from the Sites except as provided in this Terms of Use. You may download material from the Sites and may use the Sites for your personal, non-commercial use only, provided you keep intact all copyright and other proprietary notices. You may not republish any content from the Sites, distribute any content to others, modify, sell or otherwise use the content or decompile, reverse engineer or disassemble any software or other products or processes accessible at the Sites. Your license to use the Sites is contingent upon your compliance with these Terms of Use.
Posted by Vatic Master at 1:00 AM