India Commits Genocide of Sikhs in 1984! US must support Sikhs request to call it the Genocide it was!

Vatic Note: You almost have to be a soul-less animal to do what these people did in this article below.  Apparently a system of dehumanization had gone on prior to all of this below.  I do Not know about that yet, but it did result in the Indian population seeing and treating the Sikhs as sub  human.  There is also little explanation about the shooting of Ghandhi by the two Sikh guards, so I will follow up on that, but even so, genocide was encouraged as you will see by this time line below and events that followed.

There is no doubt this qualified as Genocide of a people based on a specific religious belief and all they are asking is that the UN afford them that call at this late date which should have been done when it all happened.  The guards should have been prosecuted for murder, but killing innocent civilians who had nothing to do with it was supremely out of line and criminal.. and from the scant evidence I can find, it was also racist. I am surprised at how much information I am unable to find about all this which usually isn't the case elsewhere. This is beginning to look like here, where we knew practically nothing of our own history that was real.

This link below this information  can lead you to action that could help the Sikhs with the UN in this case, doing the right thing.  If we ignore this, then they can ignore it when it becomes our turn and given the Homeland Securities obvious run up to something major against Christians.... I suggest we keep that in mind and make our voices heard early on the subject by helping the Sikh's obtain justice for their innocent civilians. When we refuse to act on what is right, that usually comes back to bite us.  I hate injustices, its a sign of a deteriorating &  barbaric civilization.

I have the feeling from all that I have read that there is more to what was happening to the Sikhs even before this genocide occurred and some of it may  have been political that caused the Sikh guards to do what they did.  Lots of unanswered questions, but I intend to put up the information as it comes in. So, like a good soap opera stay tuned for the next episode.

India Commits Genocide of Sikhs in 1984
http://www.1984yesitsgenocide.org/the-genocide
by Sikhs for Justice 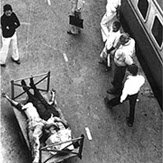 As many Indians regard Sikhs as sub-human (due to the dehumanization process), the killing begins and quickly becomes a mass killing legally called “genocide.” Politicians, state workers, police, public transportation, popular celebrities, state owned radio, and the military all take active or passive parts in the extermination of Sikhs.