Is There Evidence that Saddam Hussein is Still Alive?

***Fund raising again: This time we are asking for help,  for a total of $450 by the first of Sept.  The balance is still the same as yesterday.  August is return to school time and tourists are leaving so no jewelry sales so far for August.  The fires ate up our summer tourism season and now its almost over.

If we have contributed in anyway to you and you wish for us to continue, and you can afford it, we ask that you contribute to this effort, over on the right hand side of the blog using the pay pal button. Please do what you can, since we understand as much as anyone, the times we live in, but to keep going we must have help.  Thank you so much and Bless you for all your support in this massive effort.  We can not do this without you.

Vatic Note:  I did not see this when it first came out.  I just now saw it for the first time.  I remembered back when I first saw photos of him and I said almost immediately that it was not him.  I got pooh poohed which was ok, since what I believed or anyone else didn't matter.  They had taken over Iraq and it was a done deal.

Then, they supposedly had him in jail, and his wife came to see him, and she came out screaming   "Where is my husband, what have you done with him?"  That was the 2nd inclination that I had, that Saddam was alive and the US was hiding him .    But Why?  I  had not thought about that for a long time now, and this has triggered that question in me once again.

Its the same with other middle east leaders that we had supposedly overthrown, but yet, others were saying they are still alive.  Tunisia was one such country,  and who knows about the others.  As we know, many leaders of nations are in the pocket of the globalists which includes the zionist bankers and Israel, so its not only  possible, but probable since its "by deception, they conduct war".

I do believe Gadaffi is dead, since he was the biggest threat to Rothschild in the African continent and was causing massive losses for Rothschild by using the interest free loans and gold backed currency, which is why they want to take down Iran as well.  Iran has more gold than China and Russia put together and that is a no  no for Rothschild.  That would ruin all their plans to move into a global fiat currency.

Author's Note: This article first appeared on FarShores on 8/12/03. In the interest of accuracy, I have pulled that draft and replaced it with this updated version. 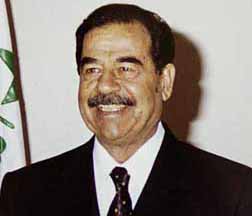 (VN: BEFORE HIS CAPTURE)
Film will soon be made public of an Iraqi Army officer describing how he saw a US Air Force transport fly Saddam Hussein out of Baghdad. The explosive eyewitness testimony was shot by independent filmmaker Patrick Dillon, who recently returned from a risky one-man odyssey in Iraq.
In the film, the officer, who told Dillon that he commanded a special combat unit during the battle for Baghdad airport and whose identity is temporarily being withheld, explains in detail how he watched as the Iraqi dictator and members of his inner circle were evacuated from Iraq's capital by what he emphatically insists were United States Air Force cargo planes.
Presently, the only copies of the film (which I have not yet seen) are in New York City. People who have viewed it describe it to me as compelling. 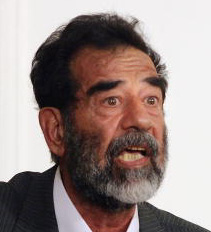 (VN: AFTER HIS CAPTURE - check his bottom teeth)
Dillon told me by phone that, prior to the final assault on the capital by American ground forces, the officer had been entrusted with the near impossible job of ensuring that one of Baghdad airport's runways would remain operational no matter what.
In civilian life the officer is reportedly a highly trained civil engineer specializing in airport operations. He states he was selected to command this hazardous mission in part because of his expertise in concrete surface construction.
He goes on to report that there was a ferocious battle at the airport, with losses on both sides far worse than the mainstream news services acknowledge. He deviates even further from officially sanctioned accounts, by unequivocally stating that the battle for control of the airport actually lasted several days longer than commonly believed, dragging on through April 8th and culminating around dawn on the morning of the 9th.
Most news sources cite April 4th as the day when the airport fell. But many conventional accounts also acknowledge, if only in passing, uncertainty as to exactly when the airport was fully subdued,frequently offering the 5th and the 6th as other possibilities. Virtually everyone agrees on April 9th as the day that the battle for the entire city officially ended.
In any event, the officer adamantly maintains that his combat/construction brigade, despite heavy casualties, managed to hold off US troops and preserve a useable length of runway right through the night of April the 8th.
Then early on the morning of April 9th, as the remnants of his unit were close to being overrun, a general cease-fire was unexpectedly declared for 6 AM. Shortly after it went into effect, and in broad daylight, the officer claims a motorcade of 10 Mercedes stretch limos suddenly barreled onto the airfield, carrying Saddam and his entourage.
Almost simultaneously, a flight of what the officer asserts were four USAF Hercules transports swooped down and landed on the lone stretch of intact runway. All four C-130s dropped their rear loading ramps and the limos drove up into the cargo bays of the waiting planes, which then took off. The officer insists he has no idea where Saddam or any of the other members of his party may have gone.
Dillon says his film lends major support to what many have believed for years: that Saddam was little more than an american tool, a stage-managed "evildoer", just one in a long line of useful villains bought and paid for by the United States in order to better manipulate international politics and commerce.
The gutsy New York based filmmaker, who risked his life amid the chaos of postwar Iraq, says that much of the Iraqi populace believes Saddam is not dead and they worry he could still exact revenge from afar.
While many Iraqi civilians initially welcomed American forces, Dillon told me most Iraqis, having now had a bitter taste of American occupation, feel enraged with the US and its soldiers. Dillon said living conditions in Iraq are horrible and that little of significance is being done to relieve the situation.
Based on what he saw during his travels, Dillon told me he's convinced the war and its sweeping devastation of the Iraqi nation is in reality a mind boggling charade. Rather than liberating Iraq, its actual purpose is to corral Iraq's huge oil reserves and to serve as a pretext for channeling tens of billions in largesse to favored American corporations like Haliburton and Bechtel.
As an example, Dillon pointed to how US air strikes systematically obliterated every last Iraqi telecommunications facility from one end of the country to the other, a measure he maintains vastly exceeded all practical military necessity. Then, without even the pretense of a competitive bid, Washington gifted WorldCom, the near bankrupt US telecom giant responsible for the greatest fraud in financial history, with a huge multi-billion dollar contract to build Iraq a new nationwide state-of-the-art telephone system.
Copyright ©2003 - Bill Dash
Alternate URL: www.farshores.filetap.com/