Vatic Note:  First, we wish to extend our "HAPPY THANKSGIVING" to all our readers, and hope they have a wonderous and rewarding holiday with their family and friends.  We are back up partially, so be patient, got a good computer guy and he is working wonders.  We are also still fund raising as I am sure you can imagine after all of this being down for so long and the costs incurred for the computer help, so please donate off to the right if you are able.   Thanks for all your support.

This is up  because we see so FEW HEROS in the news business anymore, that its worth highlighting them when we finally do.  This is one such case.  They were also very honest about why they quit, which I am sure did not make Eisner of ABC News very happy.  There has got to be a way to begin our own news stations etc, at the grassroots level.

We are creative and helped to build this country and all such services before the foreign invaders came in and took it all over.  We can do it again.  Such invaders have destroyed their own country and have proven they are the least capable of providing ingenuity, creativity and the necessary skills to do the job... so its up to us out here to do a Ron Paul like we did in 2008, for our economy, business and nation.

Two ABC News Anchors Quit Live On Air
http://beforeitsnews.com/media/2012/11/two-abc-news-anchors-quit-live-on-air-2448676.html
by Brightside Bincheck, on "Before Its News". 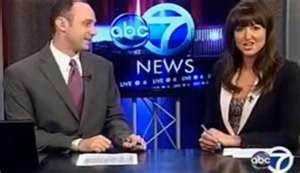 (VN: Video of resignation, is below, after the article.)

Two ABC news anchors quit their jobs during a live TV broadcast, according to video uploaded to the internet.
Citing a long battle with senior management on journalistic practices on Bangor TV stations, news co-presenters Cindy Michaels and Tony Consiglio announced their resignation at the end of the news on Tuesday 6 pm.

Michaels and Consiglio, who have a combined total of 12 ½ years of service at ABC 7 and sister station Channel 22, surprised the staff members and viewers with their joint resignations on Tuesday night.

“I just wanted to know I was doing the best I could and was being honest and ethical as a journalist, and I thought there were times when I could not do that,” Consiglio, a native of northeastern Connecticut who broke into TV as a sports reporter in April 2006, said.

Not everyone was surprised by the resignations live on the air.  “No, that was unfortunate, but not unexpected,” Mike Palmer, vice president and general manager, said. “We will hire experienced people to fill these positions, sooner rather than later.”

Neither journalist had told anyone of their decision before Tuesday’s news. “We think that if we had offered our plans off the air, we would not have been able to say goodbye to the community on the air and it was really important for us to do that,” Michaels, a news director of the station, said.

The article is reproduced in accordance with Section 107 of title 17 of the Copyright Law of the United States relating to fair-use and is for the purposes of criticism, comment, news reporting, teaching, scholarship, and research.
Posted by Vatic Master at 6:10 AM