Vatic Note:   There are some very good conclusions in this article that I believe to be the case, which is Gaza was a coverup for something else.  Was it Netanyahus re-election, as he states here??  Probably and very likely, one of the reasons, but I think there is a bigger reason than  this.

I do not know this opinion of mine is a fact, but its certainly one of the conclusions a critical thinker can come to and seriously consider.  First lets look at facts, the "what happened" facts about Benghazi in Libya and the so call murder of the Ambassador,  then we will look at something else that has been going on leading one to ask "What is going on in the White House and pentagon, since major moves are being made there, and no serious press coverage  of those moves"?

Facts as we know them.... Petraeus resigned... Hillary, Panetta, Geithner and Holgren will not be in this administration after the inauguration and swearing in, further, a military officer was arrested for failure to obey a "legal" order, when he tried to rescue the ambassador.

Recently, the general in charge of the Marine corp was relieved of duty, and almost 100 naval officers have been relieved of command.  How many of you know all about these facts?   So, why the upheavel in the White House and Pentagon?  What is going on that we need to know about?  Is it about past failures or future false flags?

A third question is why would Israel care?  Because its their people who have been running Obama, the White House, the Pentagon, intel services, Congress, and Homeland security, all these years, and screwing up and contributing to their own exposure.

In otherwords, the public is turning on them, especially the dispora Jews residing in this nation and other countries outside of Israel. Netanyahu, nor AIPAC can continue to control congress and the WH if these khazars lose support of the Jews here in the United STates, since pressure would be off the congress during election cycles.

So my guess about this below is they are trying to distract attention from  what is going on that they do not want us to see or know about with respect to our own government and their handling of it.   They never do anything for just one reason, so of course, a little genocide goes a long way.  And don't forget, there has been fighting going on between the factions at the top, and that could also be what we are seeing going on here.  Given Hamas is controlled and supplied with those very rockets, by Israel to use at their command, I have no doubt this is a classic distraction false flag.  The Israeli's need to kick these people out. 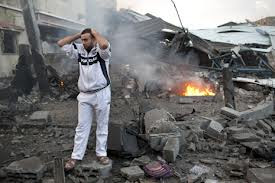 So many wars to launch, so little time. When you're the political leader of the most militarized nation on the planet - as is the case with Israeli Prime Minister Benjamin "Bibi" Netanyahu - you gotta find ways to play with your toys.

Even if you're itching to, you can't bomb Iran because you don't have the right bunker buster bombs and enough fighter jet refueling capability. And on top of it, re-elected US President Barack Obama has made it absolutely clear; the way forward is diplomacy, not bombs.

This may be an indication that Obama is at least considering a deal: "There should be a way in which they [Iran] can enjoy peaceful nuclear power while still meeting their international obligations and providing clear assurances to the international community that they're not pursuing a nuclear weapon." This had led to the president's commitment to "make a push in the coming months to see if we can open up a dialogue" cutting through the US/Iran Wall of Mistrust.

So what is Bibi to do? Simple. Launch Operation Pillar of Cloud (then Pillar of Defense; see this priceless piece on the "divine" ramifications) against the only place on Earth the Israeli Defense Forces (IDF) can raise hell and wreak havoc with total impunity and negligible "collateral damage"; the under-siege, illegally blockaded, collectively punished-to-death inhabitants of the open-air prison known as Gaza.

Of course you won't find this explanation by reading the Murdoch press or watching CNN. Nor will you get any detailed explanation on the real timeline leading to what could be another war.

This is the best timeline so far. Crucial in it is what happened last Sunday. Gaza Health Ministry spokesman Ashraf al-Qidra announced that a 13-year-old boy, Hameed Abu Daqqa, was shot in the stomach while playing football with his friends outside his southeast Gaza home. This soccer terrorist was evidently a threat to myriad Israeli helicopters buzzing overhead.

Launching a war, for the IDF, is child's play. Tel Aviv just had to kill a few Palestinian civilians like the dangerous soccer terrorist - and send in some extra tanks. Gaza factions had to respond - and they targeted Israeli soldiers (not civilians). That was the perfect excuse for Tel Aviv to go on a rampage.

On Monday, Hamas and other Palestinian factions in Gaza offered a renewed truce to Israel. To no avail. On Wednesday, the head of the armed wing of Hamas, Ahmed al-Jabari, was killed in a targeted assassination (ask General David Petraeus and his CIA buddies about it, they are specialists in the matter).

One does not need to read Haaretz to know that al-Jabari has been the top Israeli subcontractor in Gaza - as in charge of assuring Israel's security - for the past five-and-a-half years. In exchange, Israel once in a while would drop a few shekels on Gaza's banks, via bulletproof trucks.

So why snuff out al-Jabari? Simple. Israel goes to the polls in January. Thus emerges Bibi's political campaigning in full-action mode. Campaign motto: Let's kill Palestinians. With such thrills on offer, any other Israeli political voice - even slightly dissenting - is drowned.  (VN: see how easy it is for the khazars to sell out their own assets from another country,  even to kill them, and do it all for political gain, but then they wrote that in their talmud about how goyim lives are worth nothing, even if they do a job for the khazars, they are still more valuable sometimes, like in this case, dead.They will always betray their allies, and they continue to prove it every single day.)

Lemme change the subject
On Iran, former CIA analyst Paul Pillar and then John Glaser at antiwar.com have been right on the mark. Bibi bet on the wrong horse in the US - his pathetic, defeated pal Mitt "Binders Full of Women" Romney.

To compound matters, the relationship between Obama and Bibi is as frosty as holidays in the Arctic - at least since 2010, when Obama wanted a freeze on settlement construction in the West Bank and Bibi responded with provoking Iran into attacking Israel, hoping to drag the US into a new war.

Now, Bibi obviously sensed that Obama is considering moving towards a deal with Iran. So he killed two (Arab/Persian) birds with one (or several) stones/targeted assassinations; he changed the subject - once again - from "existential threat" Iran to "terrorist" Hamas, knowing full well that as long as Israel is killing Palestinians while Washington looks elsewhere (the Asia-Pacific?) the leadership in Tehran will never accept/trust meaningful negotiations.

This is Bibi telling Obama; "You wanna deal with those crazy mullahs? Over my dead body, Barry boy!" And on top of it he gets away with Western public opinion being totally brainwashed by corporate media; once again those evil Palestinian "terrorists" are duly terrorizing oh so innocent Israelis. The icing in the deadly cake is an IDF spokesman spinning madly that the Hamas-ruled Gaza Strip is "a forward Iranian base".

Just like clockwork, only a few hours after the truce/ceasefire totally collapsed, the Obama administration in its pre-2.0 form duly proclaimed Israel has a "right" to strike anything, anywhere, in "self-defense". And how dare Hamas to retaliate.

A ground invasion may be imminent. But Bibi may - once again - be biting more of a gefilte fish than he can chew. Don't expect any condemnation from the cowardly petro-monarchies of the Gulf Counter-Revolution Club (GCC), previously known as Gulf Cooperation Council. And don't expect any condemnation from all those Western "Friends of Syria" who get so outraged by the Assad regime killing "its own people".

Yet Egypt under Muslim Brotherhood President Morsi will have to do ... something; the Egpytian street, which is all in favor of scrapping the Camp David accords, will demand it. On top of that, Cairo itself broke the truce between Tel Aviv and Hamas - now totally sabotaged by Israel. Moreover, Hamas is supported by Turkey and, crucially, the Emir of Qatar and his petro-billions. Will they just shut up and watch the carnage? As for King Playstation in Jordan, he cannot play conciliator towards Israel because he may be booking a one-way flight to London sooner than he thinks.
If Obama had any balls he would be fuming. Then he would smack down Bibi. Shouldn't even bet on it. We know he won't.

Pepe Escobar is the author of Globalistan: How the Globalized World is Dissolving into Liquid War (Nimble Books, 2007) and Red Zone Blues: a snapshot of Baghdad during the surge. His most recent book is Obama does Globalistan (Nimble Books, 2009). He may be reached at pepeasia@yahoo.com

(Copyright 2012 Asia Times Online (Holdings) Ltd. All rights reserved. Please contact us about sales, syndication and republishing.)
The article is reproduced in accordance with Section 107 of title 17 of the Copyright Law of the United States relating to fair-use and is for the purposes of criticism, comment, news reporting, teaching, scholarship, and research.
Posted by Vatic Master at 1:30 AM