Vatic Note:  Well, that is one effective way to cull the population.  First get them hooked on George HW Bush's illegal drugs globally, then insert massive horrible diseases within the Bush cocaine and then pass it out to those you got hooked and kill them off while also spreading a horrific disease.  And you wonder why I say these lizards are insane???  Remember Bush is also a big holder of legal drug companies as is the Dan Quayle family.

Eli Lilly come to mind?  Then you have both Obama and Rahm Emmanual as holders of stock in the Baxter drug company out of chicago,  you know,  THE ONE THAT TAINTED MILLIONS OF FLU VACCINES AND TRIED TO FEED THEM INTO EUROPE BUT GOT CAUGHT?  It was stated that if the Chec Republic had not caught those vaccines when they did then 30 million europeans would have died from the vaccines.  This is what we are dealing with here.  INSANITY.  (This photo proves it.  Its Bush Sr in the White house wearing a hoddie.  Told you these people are insane!) 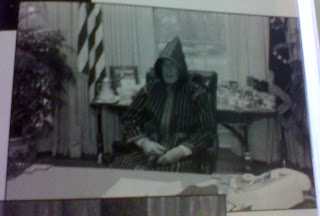 These addicts are our relatives who need recovery and treatment, not a death sentence.  Especially not a horrible, sadistic death sentence.  Sadism in on the march.  Now I am wondering if they are doing this in third world countries and in Europe or is it just America? This is what we can expect under satanism. Are you mad yet?

A fleshing eating disease has been discovered in Cocaine in New York and LA. Experts warn the Cocaine supply of the entire nation may be affected. 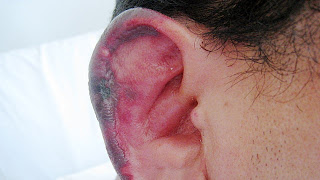 Cocaine cut with the veterinary drug levamisole could be the culprit in a flurry of flesh-eating disease in New York and Los Angeles.

The drug, used to deworm cattle, pigs and sheep, can rot the skin off noses, ears and cheeks. And over 80 percent of the country’s coke supply contains it.

“It’s probably quite a big problem, and we just don’t know yet how big a problem it really is,” said Dr. Noah Craft, a dermatologist with Los Angeles Biomedical Research Institute.

In a case study in the Journal of the American Academy of Dermatology, Craft describes six cocaine users recently plagued by the dark purple patches of dying flesh. And while they happened to hail from the country’s coastlines, the problem is national.

“It’s important for people to know it’s not just in New York and L.A. It’s in the cocaine supply of the entire U.S.,” Craft said.

Craft is one of several doctors across the country who have linked the rotting skin to tainted coke. The gruesome wounds surface days after a hit because of an immune reaction that attacks the blood vessels supplying the skin. Without blood, the skin starves and suffocates.

Eighty-two percent of seized cocaine contains levamisole, according to an April 2011 report by the U.S. Drug Enforcement Administration. Why dealers would stretch their stash with levamisole instead of the more traditional fillers, like baking soda, is unclear, although studies in rats suggest the drug acts on the same brain receptors as cocaine. So it might be added to enhance or extend the cocaine’s euphoric effects on the cheap.

Hugs Not Drugs: Cocaine Laced With Veterinary Drug Will Rot Your Flesh

As if we didn’t have enough reasons not to snort coke, studies recently have revealed that the vast majority – a shocking 82% – of the country’s supply of cocaine is laced with a veterinary drug called levamisole. The drug is used to deworm cattle, pigs, and sheep, but when ingested by humans, can rot the flesh from the cheeks, ears, and nose. Sounds glamorous!
[...]

There has been an outbreak of cases of people with a mysterious rotting flesh condition in New York and Los Angeles and doctors in these cities have linked them with tainted cocaine.

It’s unclear why the suppliers don’t just stick to cutting their product with the usual filler, like baking soda, but it could be because levamisole has been known to act on the same brain receptors as cocaine, according to studies done on rats. If it reacts the same way in humans, the offending cocaine manufacturers may be using it to extend or enhance the drugs effects.   (VN:  Since Bush controls the illegal drug industry globally, I suspect its more about depopulation of the "unwanted" and useless feeders, than about filler, maybe Bush is in cahoots with Bill Gates on the issue of depopulating.... lol)
[...]
Read The Rest..