As if the NDAA wasn’t bad enough — essentially turning the whole planet, including America into one giant battlefield — Congress is set to introduce an amendment that would grant even more power to the military for offensive operations in cyberspace.

As Mike Masnick highlights in his article for TechDirt, the applicable section currently gives authority to the president, whereas the amendment would give the entire Department of Defense the same authority. 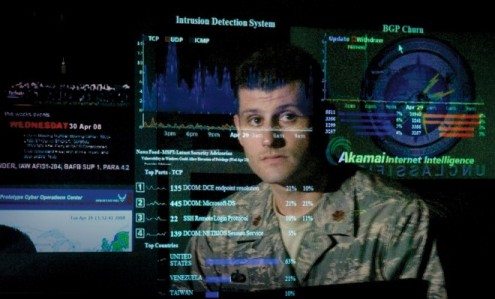 The prospect of clandestine military actions online against whichever targets any one of the military agencies deems appropriate will officially complete the goal of full spectrum dominance.


The current text of the NDAA reads as follows:

Congress affirms that the Department of Defense has the capability, and upon direction by the President may conduct offensive operations in cyberspace to defend our Nation, Allies and interests, subject to—

(1) the policy principles and legal regimes that the Department follows for kinetic capabilities, including the law of armed conflict; and

This is certainly bad enough, as it essentially gives dictatorial power to current and future presidents. However, what is even worse is the proposed amendment which hands over the power to the Secretary of Defense and every secretive agency under his direction, including anything hidden within the Black Budget:

SEC. 954. MILITARY ACTIVITIES IN CYBERSPACE.
(a) AFFIRMATION.—Congress affirms that the Secretary of Defense is authorized to conduct military activities in cyberspace.
(b) AUTHORITY DESCRIBED.—The authority referred to in subsection (a) includes the authority to carry out a clandestine operation in cyberspace—

(1) in support of a military operation pursuant to the Authorization for Use of Military Force (50 U.S.C. 1541 note; Public Law 107-40) against a target located outside of the United States; or
(2) to defend against a cyber attack against an asset of the Department of Defense.

(c) RULE OF CONSTRUCTION.—Nothing in this section shall be construed to limit the authority of the Secretary of Defense to conduct military activities in cyberspace.

Masnick rightly points to the key word “clandestine” within the above text.  This is nothing short of an open admission that the military is taking full control over both the supposed safety of the infrastructure as well as manipulation of that infrastructure and the data that moves across it.
In July of last year, the Pentagon announced their strategy to treat cyberspace as an “operational domain” in their Department of Defense Strategy for Operating in Cyberspace (PDF) where they claim that “Hackers and foreign governments are increasingly able to launch sophisticated intrusions into the networks and systems that control critical civilian infrastructure.”

Even though the above concern has been disproven time and again, this new amendment seeks only to expand the role of DoD and its dangerous offspring the NSA.
Perhaps worst of all is that this amendment is an open handover of power by Congress to let the Defense Department do whatever it wishes with minimal or no oversight, capitulating to the directives DoD has already given to Congress regarding war in the real world.
A response by Defense Secretary Leon Panetta in June of last year to a question by Sen. McCain made clear his view that Barack Obama should work jointly with DoD within a military dictatorship framework, with a philosophy of extralegal measures taken by the president “when needed” by the military:


‘Senator, I believe very strongly that the president has the constitutional power as commander in chief to take steps that he believes are necessary to protect this country and protect our national interests,’ said Panetta. ‘And obviously, I think it’s important for presidents to consult, to have the advice of Congress. But in the end, I believe he has the constitutional power to do what he has to do to protect this country.’ (Source)

Congress would seem to agree wholeheartedly with this assessment by amending Section 954 of the National Defense Authorization Act and ushering into cyberspace an even wider philosophy of military supremacy over what used to be a Constitutional Republic.