THIS is important to the USA consumer! "Thai Union Frozen" to buy U.S. tuna firm Bumble Bee for $1.5 billion

Vatic Note:  This is what happens when the Fascists take over.   We did a blog on the WTO, which is a global entity,  ruling that tuna companies do not have to label their tuna as "dolphin safe" tuna, and that overrides our sovereignty and our ability to shop for such products if we so choose.   We would have to give up tuna altogether enmass.

If you think it was hard to bring our nation together over one issue, you can imagine the multiple times harder it will be to bring the globe together over one issue.   Now, before fascism/zionism grew to the level its at right now, in power and control,  The "people" used to charge, try, convict and enforce the death penalty on those fascists/corporatists, such as Mussolini, for their total disregard for the humans under their command, in favor of the corporatists.

That can't happen anymore, if this WTO continues to exist and make law arbitrarily based only on fascist considerations.  This means they can do "as they will" (A satanic saying)  that violates the will of the people, and we will just have to live with it.  That does not include all that can be done to us that are crimes against humanity. I am sure, given what we already know, that you can imagine just how dangerous that is to "we the people, and especially our children".

We, the people, can no longer protect intelligent animal life on this planet, such as dolphins and whales.  WE can, but not without a fight and we have proven we have nothing in the way of principles and ideals that we are willing to fight for,  to die for, and to live for.  We are decidedly in a deep downward spiral when it comes to higher ideals.  It appears they have been extremely successful in implementing their protocols in order to dominate the world.

Notice how the khazar international bankers have now directed the financial health of the Asian slave labor countries,  into prosperity, as they originally had done to America and western nations.  Also notice little if any real news from the alternative press ever gets through to the people.

The khazar Zionists bankers have the same control and stranglehold on Asia as they once did on the western world, we can thus, guess who is next to be pumped up and then stripped of all their accumulated wealth like they have done to us.  You guessed it Asia, and how did they do that?  You guessed it..... COMMUNISM, INTO FASCISM. 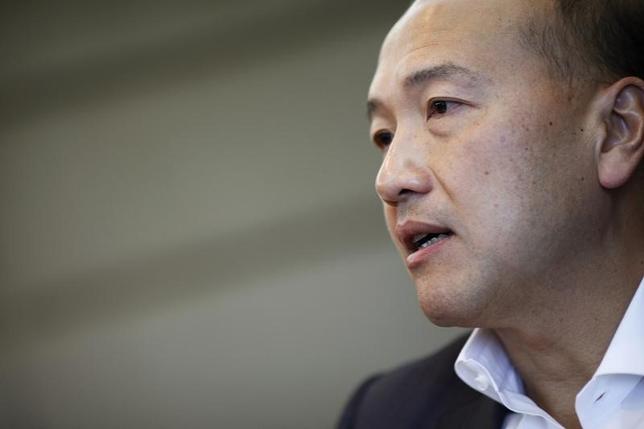 Thiraphong Chansiri, the president of the worlds biggest canned tuna maker Thai Union Frozen Products (TUF), talks to Reuters reporters in his office in Bangkok March 22, 2010.
Reuters/Damir Sagolj
Thai Union Frozen Products PCL (TUF.BK), the world's biggest producer of canned tuna, has agreed to buy U.S. competitor Bumble Bee Seafoods for $1.5 billion as part of a plan to double revenue through overseas acquisitions.
The purchase will give Thai Union control of some of North America's best-known seafood lines, including two of the three biggest canned tuna brands in the United States, in its quest to reach revenue of $8 billion by 2020.

"The deal is the largest acquisition in the history of our company and one of the most exciting external growth propositions," Thai Union President and Chief Executive Thiraphong Chansiri told reporters on Friday.

The deal marks the latest instance of consolidation in the global seafood industry, which analysts say has been in flux over the past few years as companies change the way they manage supplies and costs to better cater to shifting consumer demand.  (VN:  that means that Asia will control the consumer prices of the tuna industry, which is what a monopoly does. That is why the SHERMAN ANTI-TRUST ACT was passed in the USA, so no company could garner the power to do that. It forces the pricing to be based on consumer decisions through their pocketbooks. So competition was a critical element in the success of that legislation. Monopolies eliminates all competition, thus consumers will pay whatever the monopoly company decides. This will be your new world order in every area of your suvival life. Corporations will rule and bankers will own them, thus you are a slave without knowing it. )

The transaction is likely to be completed in the second half of next year, subject to approval by U.S. antitrust authorities, said Thai Union, whose clients include Wal-Mart Stores Inc (WMT.N) and Costco Wholesale Corp (COST.O).

Thai Union has operated in the United States for over 17 years, and Thiraphong said he expects a "positive response" from the authorities.  (VN: of course he does, since the globalists bankers hire and control the deciders.)

Thai Union's Chicken of the Sea is the third-biggest tuna brand in the United States behind Bumble Bee. The top brand, Starkist, is owned by South Korea's Dongwon Industries Co Ltd (006040.KS).

With so few canned tuna producers, major asset sales will be needed to persuade U.S. antitrust authorities to allow the deal to proceed as tuna consumption is declining, antitrust experts said.

"This potential merger will raise concerns with U.S. regulators and may lead to an agreement to a divestiture of U.S. assets if they can find a willing buyer. I don't think this merger would breeze through," said Jeffrey Jacobovitz, an antitrust expert at Arnall Golden Gregory LLP.  (VN: Oh, right, that means they will put on a great performatnce to convince us they fought hard to stop the global monopoly on tuna.  Yeah, right!  I am sick of the games. )

CASH CALL
Bumble Bee is the largest canned tuna and sardine producer in North America, with brands including Brunswick and Sweet Sue. It is owned by pan-Atlantic private equity firm Lion Capital, which bought the seafood maker from another private equity firm for $980 million in 2010.

It has annual sales of about $1 billion and estimated EBITDA of $145 million for 2014. Its purchase should boost Thai Union's sales next year to $5 billion from $4 billion, Thiraphong said.

Thai Union is open to funding options to bring down its debt-to-equity ratio, which will rise after the Bumble Bee purchase to 2.0 times, or double the company's target, Thiraphong said.

But the acquisition should boost Thai Union's 15 percent to 17 percent gross margin, Thirapong said, as Bumble Bee's margin is more than 20 percent.
Shares of Thai Union closed down 3.5 percent after Friday's Bumble Bee announcement, compared with a 0.2 percent decline in the benchmark index .SETI.

YOUNG PRESIDENT
Thiraphong, 49, is the eldest son of Thai Union co-founder and Chairman Kraison Chansiri, and took over as president when he was 30.

Kraisorn was born in Guangdong province, China, and started the business 37 years ago with a tuna cannery in the Thai province of Samut Sakhon, southeast of Bangkok. Tuna now makes up 47 percent of sales, with shrimp 24 percent and the rest from sardines, salmon, pet food and other products.

As well as Thailand and the United States, Thai Union has been active in Europe since its 2010 purchase of MW Brand PLC [MWBND.UL].

For its latest acquisition, Thai Union has hired UBS as adviser while Bumble Bee is being advised by Morgan Stanley and Rothschild. (VN: I Told you I was sick of the games. )

Thai Union is financing the purchase with the help of a one-year bridge loan from Bangkok Bank and Siam Commercial Bank, executives from the two banks said.

(Additional reporting by Diane Bartz in Washington; Editing by Muralikumar Anantharaman, Simon Webb, Christopher Cushing and Peter Galloway)
The article is reproduced in accordance with Section 107 of title 17 of the Copyright Law of the United States relating to fair-use and is for the purposes of criticism, comment, news reporting, teaching, scholarship, and research.
Posted by Vatic Master at 1:30 AM

I no longer eat seafoods
January 2012 3 anti whaling activists were taken on board a Japanese vessel which was part of the Japenese whaling fleet.
It was said ( not by these guys) that the Japanese whaleing fleet was actually in the employ of interested parties of global toxic waste disposal. That their whaling was just a disguise. Can you imagine how much stuff they have dumped over the years.
Let them have the company.