The Public should know: Mass Killings Stopped by Armed Citizens

Vatic Note: Please note there are two sets of links, the first one by gunwatch and the second set at the end of the first, from "The Armed Citizen". Notice these potential shootings were not staged or manufactured and none of them were, coincidentally war gamed in advance of the event  by Homeland Security.  I think that is critically important to note, where the Connecticut one was.  We are still working on confirmation of this as brought up to us by a reader.  Will post as soon as we can get a second confirmation.

Another great question is,  why doesn't the MSM publish these incidences as much as they do the actual killings.  I think the number of lives potentially saved is just as important as those killed, and especially if done by those hired, elected and appointed to protect us from such acts.  These below are only examples of the ones we do know about and its not all of them, so who knows how many over a 5 or 10 year period... that might have resulted in many more deaths had those citizens not been armed.

They are about to take that right away from you because they are afraid of you once you find out what their final agenda really is which involves depopulating millions of us in this country and billions more globally.  As we say all the time, If you give up your guns its the same as committing mass suicide with a foreign country who murders their own unarmed citizens, pedophiles their children, organ harvests from teens, and kidnaps women and forces them into prostitution which is legal in their country and these same inhuman mafia criminal types are currently controlling and running our government.

If you have any doubt, simply remind yourselves of facts, such as the number of FEMA camps that are now staffed and waiting to open up for business.  Remind yourselves of the NDAA bill that allows them to arrest you without a warrant and hold you indefinitely, re-educate you, by chipping you with cancer causing RFID chips to track you.   Notice in map below most of the camps are in the southeast US where many gun owners are, and out west. 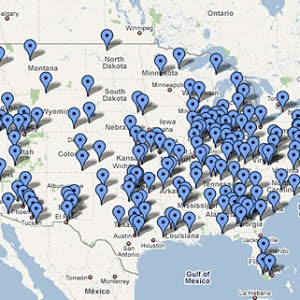 Remind yourselves of the Patriot Act, fisa courts, and EO's and signing statements that virtually gutted The Bill of Rights that is the condition of our country right now.  Massive spying, attempted forced killer vaccines, rendition, torture, assassinations domestically without restrictions or oversight.   So much, so you get the point.  Mass suicide if you give them up.

All of this is exactly like Nazi Germany And Russia after their gov overthrows, and gun control  If we are going to die, I think it should be on our terms and not theirs.

Appalacian Law School Link
Plans to slay everyone in the Muskegon, Michigan, store and steal enough cash and jewelry to feed their “gnawing hunger for crack cocaine” fell apart for a band of would-be killers after one of their victims fought back.

Muskegon Shooting Link
The mass church shooting in Colorado Springs was stopped by the shooter being shot by a church member with a CCW permit.

New Life Church Link
The Santa Clara gunshop shooting in 1999 was stopped by an armed citizen after the shooter declared that he was going to kill everyone. Police found a list of intended victims in his car. Only the perpetrator, Richard Gable Stevens was shot.

Santa Clara Gunshop Link
The December, 1991, Aniston, Alabama defense where a CCW holder stopped armed robbers who were herding employees, customers, and his wife into a cooler. He shot both robbers, killing one.

Aniston Shoney’s Shooting Link
July 13, 2009, in Virginia at the Golden Food Market: The gunman tried to shoot several people, was stopped by a CCW carrier.

Golden Food Market Shooting Link
Just recently, in Early Texas, armed citizen Vic Stacy shot and stopped a deranged man who had just murdered two neighbors and was firing at police with a rifle. Stacy made a very long shot with his revolver, three times as far as the perpetrator was from the police officer, who had an AR-15 type rifle.

Early Texas Peach House Shooting Link
That sounds like a very good story… but it never made the national news.
I wonder who made the decision to spike that story.
Of course, when a mass shooting is stopped by an armed citizen, there are not as many victims. This leads to the charge that it would not really have been a “mass shooting”.

SECOND GROUP OF LINKS PROVING OTHER LIVES SAVED BY BEING ARMED.
http://www.thearmedcitizen.com/

The article is reproduced in accordance with Section 107 of title 17 of the Copyright Law of the United States relating to fair-use and is for the purposes of criticism, comment, news reporting, teaching, scholarship, and research.
Posted by Vatic Master at 3:39 AM