Retired Naval Commander Courageous Stands for Right, Against Might!


Vatic Note:  Now here is another hero who is courageous and willing to stand behind her country, its freedoms and her convictions against an awesomely overbearing machine.  More and more are showing up.  We need to visit her in jail and make sure they do not experiments on her,  feed her real food, and give her the proper medical treatment she may need.  We salute her and support her 100%.   WE also need to thank her for having such courage along with all the others who have done the same thing over these past 10 years. To bad that Soros funded the OWS  instead of it coming from we, the people.   However, she just expanded it  way beyond what he intended for it to do.  Their demands are still like something out of Orwells "1984".

A Naval Commander for the 99% Stands Trial 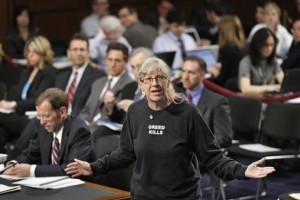 ;
Consider the story of Leah Bolger, the latest American hero up on trial:
She is a young female artist in the Midwest. She joins the Navy at 22, is made commander and serves two decades as an anti-submarine warfare specialist. After retiring she joins Veterans for Peace and becomes the organization’s first female president. Then, in October of 2011, she commits the crime of interrupting a public congressional hearing of the Super Committee to deliver a message from the 99 percent: End the wars and tax the rich to fix the deficit.

Because of her 45-second transgression, Commander Bolger now faces a court trial this Thursday morning, April 12, where she could receive a maximum jail sentence of six months. Bolger, 54, intends to plead guilty and use her court appearance to draw the connection between America’s deficit debacle and the three-quarters-of-a-trillion-dollar defense budget we, as voting taxpayers, spend as a base-mark for failed and unending military ventures overseas.
Bolger has no illusions about what Americans are up against: a corporate-run military machine that she says “is so big and complicated and intertwined with the government and Congress and the media that I don’t know where you can start unraveling the knot.” But one place to begin is with the Occupy movement, which she says has placed too little emphasis on ending America’s wars in Afghanistan, Iraq and elsewhere.
She feels, so far, that Occupy is “all about corporate rule and the 99 percent, with the 1 percent controlling everything. But I don’t see very many people talking about the war and the killing machine and the military industrial complex being a major contributor to this disparity between the rich and the poor.”
A “moment of epiphany”
Bolger grew up in the Kansas City area and majored in fine arts at Central Missouri State University. When she failed to get into grad school, she joined the Navy for the simple reason that she needed a job. Bolger knew she wasn’t a typical naval officer and that, in a sense, she “never really fit in.” While studying at the U.S. Naval War College in Newport, RI, where she eventually became the deputy dean of students, she wrote papers on conflict termination and the importance of the United Nations, putting her “on the other side of what most people were talking about.”
“I had no intention of sticking around for 20 years,” Bolger recalls. In the 1980s, women still weren’t even allowed to work on Navy combat ships or aircraft. Yet as a commander — equivalent to the rank of lieutenant colonel in the Army — and a specialist in anti-submarine warfare, Bolger’s skills led her on what she considered “exciting” missions around the world, from Iceland and Bermuda to Japan and Tunisia.
Despite all the experience, though, Bolger says she remained “naïve and ignorant about foreign policy and about what the military does. It was easy to be in for 20 years and not have to make any moral decision. I never had to shoot at anybody or launch any weapons. I never had to see the damage caused by what I was doing. And I did not have to confront the politics or the morality of what the American military machine is.”
Until later, when she did just that.
After retiring from the Navy, Bolger married and lived a traveling life on a sailboat, then in an RV, before she and her husband settled in Oregon in 2004. She began working in the peace movement soon after and, in March of 2005, attended an exhibit of the American Friends Service Committee called “Eyes Wide Open,” where she had a “moment of epiphany.”
“There was a pair of army boots for every soldier that’s been killed [since the wars began in 2001] with tags on the boots showing their names and where they’re from, boots lined up in even straight rows,” she recalls. “It wasn’t just looking at American deaths, but Iraqis too, on large posters. I just remember it affecting me viscerally, the feeling in my stomach — it was a kick in the gut when I saw that. It really, really hit me.”
By then Bolger was a member of Veterans for Peace, the St. Louis, Mo.-based organization founded by 10 U.S. veterans in 1985, which today has more than 100 chapters nationwide. She initiated a chapter in her city of Corvalis and served as the president for three years before she was elected vice president of the national organization.
When the Occupy movement got underway last fall, Bolger moved into the peace activist camp at Freedom Plaza in Washington, D.C. Then, on Oct. 26, at a public congressional hearing of the Joint Select Committee on Deficit Reduction — the unelected Super Committee that ultimately failed to produce any results for their labors — Bolger walked calmly to the front of the room where she denounced the hearing, and its “obfuscating” testimony from Congressional Budget Office Director Doug Elmendorf, as unrepresentative of what the majority of Americans wants: to end the wars and tax the rich.
During the Super Committee hearings, Occupy D.C. and the October 2011 movement produced its own Occupied Super Committee hearing, which aired on C-SPAN, revealing that cuts to military spending and increased taxes on the super-rich would achieve President Obama’s and Congress’s 10-year deficit targets in two years, while funding a jobs program, forgiving student debt and securing vital social programs.
“We tell Congress, our representatives, ‘No, we don’t want our money spent that way,’ but they’re not listening to us. They’re only listening to their corporate lobbyists, to their campaign donors,” says Bolger. This is why, she believes, “it takes breaking the law, making a spectacle to interrupt a congressional hearing in order for some attention to be paid to the average person’s voice. So that’s what I did.”


Stepping outside the comfort zone
On Thursday, a press conference will be held at 8:30 a.m. in front of the Superior Court of the District of Columbia, located at 500 Indiana Ave NW, Washington, D.C., prior to Bolger’s court appearance.
Aside from receiving media support from Michael Moore, Ben Cohen and Roseanne Barr, Bolger’s case has caught the attention of consumer advocate and former Green Party presidential candidate Ralph Nader. “Bolger showed what active citizens should be doing peacefully — confronting the corruption head on,” said Nader, “and making sure the public knows what is really going on.”
For Bolger, whether she gets charged criminally or not, it is the act of speaking up — challenging the belief that America’s corporate-controlled government can continue to indefinitely squander the nation’s human and economic capital — that she hopes to see replicated in others.
“We have to reclaim our voices, we have to demand to be heard,” she says. “The energy and the outrage and the righteousness of the Occupy movement [needs] to latch on to the war problem — for us to understand the connection and talk about it.” Bolger urges people to find “the motivation to step outside their comfort zone a little bit.”
“If they’re comfortable writing letters to the editor, maybe they can go stand at a protest. I know most people can’t take off work or fly to D.C. — they have children, responsibilities, they have to work. But I want to push people to find the courage and the strength to stand up and be a part of the resistance to our government. When I do something like this and I hear from thousands of people who write and say thank you, it makes me feel like I’m part of a big movement. We all are. We all have to amplify each other’s voices and find courage in each other’s voices.”
And for Bolger, presenting the raw numbers — the facts — is the place to start.
“This is how you make the connections: Let people see in their own communities what is being funded when Congress and the Super Committee are trying to find $1.3 trillion and the Republicans want to cut Medicare and Medicaid and Social Security and the Democrats want to raise taxes. There’s no reason why we should have to cut anything. We should be slashing the military budget.”
It’s been said since the fall that the Occupy movement lacks demands. What Bolger, through her actions, has shown is that the people themselves, rather than profits, must become the demand.
“We have the power,” she says, “we just have to reclaim it.”
This article originally appeared at WagingNonViolence.org in collaboration with Occupy.com.

So what happened at the trial. Vatic posted this three weeks after the trial. A google search for Leah Bolger has a dozen hits, but none after April 14.

This retired Navy Commander wants to salute her. She makes me feel proud that some one has put their convictions ahead of simply protecting her retired status.

I don't know, Lew, I have been sick, however, I am a bit better now and will go on a search or try to contact the group that wrote this up and find out not only what happened, but where she is, and how can we reach her. What courage and integrity. Its what we all should be doing, but the powers that be made sure the economy was in the toilet before they began doing all this garbage, so that we could not afford to do this. Many would lose their places they live, possessions etc, if they went to jail. However, when the PTB get done with us, we will lose all that anyway.

I just read that Verizon is outsourcing jobs that used to be here, and gave massive bonus and salary increases to those that did it, becuase that is where the savings on using slave labor is going. Into the pockets of the psychopathic greed mongers who have absolutely no "community responsibility or humanity" in their bones. I have been saying all along, WE ARE WHO IS GOING TO SAVE US AND WE BETTER DEAL WITH IT.

Forgot to mention, this is classic fascism. The state is run and controlled by the corporations and simply see us as means to an end. They are psychologically damage humans and that could be through any number of ways. Pedophilia, beatings when a child, who knows, but they had all humanity removed from them at a very early age and I would suspect, it was intentional. These people are seriously and completely insane.