Kissinger Promises China... 'Jeb Bush Will Be Next President'! A Must Read!!!

Vatic Note:  Here we are again with this source "Whats really happening"  that I do not like, however, I have confirmed the meeting between China and Kissinger from a different and relliable source which is a Chinese paper, english edition and photos of the two meeting.  So my question is "WHY IS KISSINGER, who holds no official position within this government,  meeting with Chinese leaders on behalf of the United States?  Well, there goes Fulfords White dragons.  LOL  They ain't doin nothin to this international cabal.  Sorry.   When the Chinese, Oxford trained and indoctrinated,  joyfully meet with the Secretary of State for the NWO,  you know they are as sold out as the rest are.

My second question is "WHY IS DAVID BOOTH reporting all this?"  There is always a reason.  Either he is doing it to cover for Ron Paul who is really working for the cabal, or he is trying to get us to stop all election activity so they can declare martial law. Or its to reassure the Chinese that the agenda is still going foward with Jeb Bush as the Lead in the program.   Frankly, I am unsure which it is.   About Jeb Bush, I have no doubt he is the designated next president.  That means war right here at home and they will get their martial law.... but then they will get a whole lot more as well. 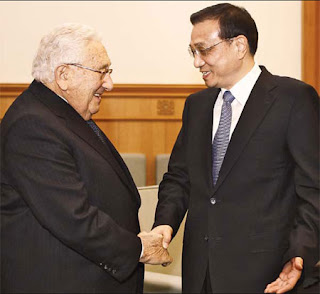 Remember Kissinger is Rockefellers secretary of State,  so whatever is being transmitted is between the Cabal of bankers and China through Kissinger.  That means Rockefeller is telling China something he wants them to know and its unofficial.  If it was "nothing" they  would have sent Hillary who is used simply to provide window dressing for whatever agenda they have.  Kissinger going means it's top level and straight from the "real Presidents" mouth,  Rockefeller.

I can easily buy this is the reason listed in this article.  Why?  Because I heard from GOP delegates in my state that word was passed around to caucuses that Bush's name was being bantied around as a brokered convention compromise and that way they thought they would not lose RP's supporters.  Well they are dead wrong.  Read this below and decide for yourselves.

I also noticed recent slanders and disinfo articles against Ron Paul that are coming out.   They are trying to make it look like he works for the bankers, and yet, we have 30 years of his consistant take, vote, and stand on bankers,  fiat currency, war, military industrial complex, police state, etc, I just couldn't figure out why at this late date they were going that route and now we know.  JEB BUSH, the prodigy of the biggest satanic magog pedophiler in the nation,  George HW bush, is slated by the powers that be, to be the Next President of the long gone United States of America.  Over a lot of peoples dead bodies.  .

Kissinger Promises China... 'JEB BUSH Will Be Next President'!

'A shocking report prepared by the Ministry of Foreign Affairs for Prime Minister Putin on the just completed meeting between China’s Vice Premier Li Keqiang and former US Secretary of State Henry Kissinger states that the Chinese were told that former Florida Governor John Ellis “Jeb” Bush , brother to the former US President and son of another, will be elected as the next American leader despite his currently not even being on the ballot. 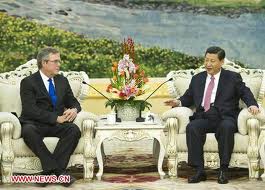 Chinese Vice President Xi Jinping met with Jeb Bush yesterday at the Great Hall of the People in Beijing where both pledged to advance cooperation between their two countries and, this report says, agreed that once Bush had taken office a ‘new era’ would begin in US-China relations.

According to this report, Kissinger told Keqiang that the Republican Party election process to select their nominee to run against President Obama was “completely manipulated” to ensure that their 2012 Convention would be “deadlocked” thus allowing for Jeb Bush to be nominated as a “consensus candidate” and thus his parties leader.

The path to a deadlocked convention, this report says Kissinger told the Chinese, lies in neither current Republican frontrunners Governor Mitt Romney or Congressman Ron Paul having enough delegates to ensure their nomination on the first ballot after which their supporters will be free to nominate anyone they so choose.

In order to ensure a deadlocked convention, this report continues, Kissinger noted that Romney will obtain his delegates from what are called Primary States while Paul will receive his from those holding caucuses and “open” primaries, with neither of them receiving enough votes to secure their nominations.

Political analysis on the US election do, indeed, note that Paul’s path to the Republican nomination lies in the caucus and open primary States which shows what is called his “secret path to victory.”

To the most shocking aspects of this report are the comments attributed to Kissinger that claim the entire American electoral system is under the control of their National Security Agency (NSA ) which controls the computers used in their elections and whose outcome is determined by their elites, not the citizens themselves.

In a dire move bolstering Kissinger’s claim of a rigged US election was yesterdays news that the giant global election firm SCYTL , which describes itself as the worldwide leader in secure electronic voting and electoral modernization, had purchased the United States most dominant election results reporting company thus insuring these people would never have true or total access as to who would actually win any of their elections.

Even worse, this report continues, the purchase by SCYTL of the private corporate site controlled by SOE software , which operates under the name ClarityElections.Com and controls the election results in over 525 US jurisdictions , was its being financed by the global investment giant Carlyle Group that was founded by the Bush and Bin Laden families nearly 25 years ago.

When queried by Chinese officials as to why Obama was allowed to be elected instead of Jeb Bush in the last US election, this report continues, Kissinger replied that the American public was not prepared for a continuation of the Bush-Clinton Dynasties that have, in fact, ruled the United States since the 1981 coup d'état staged against President Ronald Regan after he was nearly assassinated by the son of the then Vice President George H.W. Bush’s main business partner .

Kissinger further stated to the Chinese, this report says, that Obama was a “safe choice” to be an “interim leader” as besides his being a member of the Bush family (Obama is former President George W. Bush’s cousin by blood ) his mother, Ann Dunham/Soetoro , was a “prized” CIA asset who was dispatched from Hawaii to Indonesia in 1967, along with seven year-old Barack Obama, to infiltrate villages in Java to carry out a CIA survey of political leanings among the Javanese population and whose “handler ” was George H.W. Bush who a few years later became Director of the Central Intelligence Agency .

Kissinger added, this report says, that by putting Obama in office they were, also, able to secure the passing of draconian new laws in the United States that otherwise wouldn’t have been allowed to pass due to the overwhelming objections of American liberals and progressives, but who now are all but silent as the last vestiges of the US Constitution are being swept away.

Being ignored by these American liberals and progressives, however, are that the laws being passed by the Obama regime are intended to be used against them and include the power of the US President to designate anyone he so chooses as a “terrorist,” kill them without charges or trial, hold American citizens in prison, also without charges or trial, and, under a new law being pushed through the US Congress, would give the US government the power to strip Americans of their citizenship without being convicted of being “hostile” against the United States.

Though the claims made by Kissinger to China detailing how the election process in the United States has now been completely destroyed are beyond appalling, it does not, on the other hand, come as surprising from a “war criminal” who once boasted “It is not a matter of what is true that counts, but a matter of what is perceived to be true.”

To the American people themselves it remains to be seen if they will ever awaken to what is true…one can only hope they will, before all is lost…forever.'
--
youtube/qLOwTy5kOMU ;

I figured this was the plan ever since the 2000 Gore/Bush so-called "election".

Surely people are waking up? All the orwellian laws being passed. They are doing the same in UK. I can't get people to listen.
If Fulford is not genuine ( always thought WDS were in on it) what about Drake? He says RP is good but is that reverse psychology again to reduce RP support?