SHERIFF: This Land is Our Land, Feds Have No Jurisdiction

SHERIFF: This Land is Our Land, Feds Have No Jurisdiction
http://www.usobserver.com/archive/sep-11/sheriff-this-land-is-our-land.html
by Ron Lee,  US~C,  US Observer
Feb 5, 2012 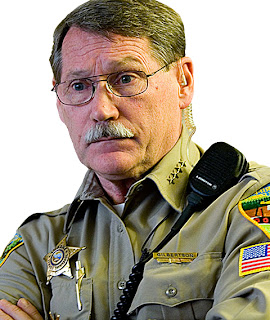 
Thankfully there are those few who take their oaths of office and to the Constitution, with sincerity, and instead they choose to fight for the people; fight for what is true and just. They are people like Maricopa County, Arizona, Sheriff Joe Arpaio, those who sign up to become oath keepers, former Sheriff Richard Mack and, of course, Josephine County Sheriff Gil Gilbertson; whose own fight against a runaway, power-grabbing, forestry service is just the tip of an iceberg Gilbertson is hauling into warmer waters.


With the USFS closing roads on county public lands, enforcement officers overstepping their legal jurisdiction and tens of thousands of acres of the county's public land being usurped through the creation of national forests and monuments for the "protection" of the environment, Gilbertson is taking it on himself to protect the people - the ones often forgotten.


When asked why he has taken up this fight, Sheriff Gilbertson said, “My duty lies in the oath that I took to protect and serve the people of Josephine County, state law and the Constitution, and their [federal government] agencies are infringing on all of the above. It's that simple.


“Look, much suffering occurred and many lives were sacrificed to make this great country what it is today; many sadly take this horrific loss for granted. A Republic form of government can be long-term but only if we maintain a system of checks and balance.


“Once we allow a runaway centralized government to weaken and/or erode the rights enumerated in our Constitution and Bill of Rights, we risk losing it all. Our government is rapidly approaching a socialistic posture; and seemingly, changing our life, as we knew it, through ‘federally imposed REGULATIONS’.”


The US~Observer has obtained a letter written by Gilbertson discussing jurisdiction. We are choosing to print it in its entirety.


Furthermore, the US~Observer would like to extend our deepest gratitude to Gilbertson for doing what he said he would - protect the County's people, no matter what.

Copy of Letter (VN:  Worth the Read)
http://www.usobserver.com/archive/sep-11/Gil-Federal-Jurisdiction.pdf

The article is reproduced in accordance with Section 107 of title 17 of the Copyright Law of the United States relating to fair-use and is for the purposes of criticism, comment, news reporting, teaching, scholarship, and research.
Posted by Vatic Master at 4:59 AM