Vatic Note: Poor Brazil,  we saw this coming during the last election.   Its following the same path as America.  I hope the people learn from our mistakes.  This whole issue to not about teaching sex in the class room at an unGodly age, when their brains and maturity are incapable of dealing properly with the subject, rather its to teach them how to do it and practice it in the school so they will be ready for the adult pedophiles high up in various gov circles who pedophile children. The more pedophiling of children there is, the more and more pedophiles are created. This is all part of the satanic molech religion, and is even written up in the Khazar babylonian Talmud,  NOT THE TORAH.   Once a pedophile, you can never be reclaimed. A perfect guarantee to maintaining a low population and if you keep people distracted with sex instead of the higher realms of thought, the more control you have over them. They never get out of the lizard brain. Its quite genius you know, but not effective. Parents have a right to a say whether this is done to their child, but if that right has been taken away, then Brazil has a MUCH bigger problem.   The fact they are using Gays for this purpose is not the issue, it could easily have been boys and girls,  but this was to ensure a reduced and easily managed population with no force.   Very clever indeed.

Brazilians Forced to Embrace Homosexuality
http://www.lastdayswatchman.blogspot.com/
May 16, 2011, by Henry Makow 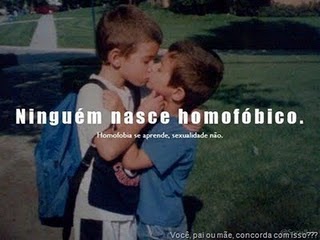 This picture is from the government material for the junior high schools.
by Marcos,  San Paolo Bureau
(henrymakow.com)

There is a shadow hanging over democracy and basic human rights in Brazil. Its name is Law PLC122.

If this law is approved, any kind of moral, religious, philosophical or medical opinion against the homosexual lifestyle will subject the author to prison and heavy fines. Not only in the commercial media, but also in blogs, religious programs and even private conversations. Since the days of the Nazi Party and the Maoist Cultural revolution, we havent' seen such a blatant attack to human rights in this scale.

The radical movement is taking advantage of the momentum produced by the approval of gay civil unions by the Supreme Court last week, in an illegal usurpation of the function of the Congress. The law disrespects the Constitution, which could only be changed by the majority of Congressmen. Now the gay activists are planning a march for the bill in Brasilia, funded with money from NGOs, in order to coincide with the Global Anti-Homophobic Day in May17th.

A heavy media campaign has been in course for several years, where only pro-gay news are shown in the newspapers. A huge campaign of desensitization has also been promoted by Globo TV, through their soap operas, watched by the majority of the population. Most soap opera authors are either openly gay or communists. They have introduced during the last years romantic gay couples, stories of gays under persecution and finally gay French kisses, in what can only be described as social engineering. This month, they had a scene where a daughter reprimands his father, saying he could be arrested by telling his boss is "fruity", "because there is a new law coming".

A practical example of partiality was the wide coverage of an attack on a gay person by a punk, in Sao Paulo. Even if there was no evidence that the attacker knew the victim was gay, and that it occurred after midnight, in a dangerous situation for any person, this was debated for weeks on end. Most crimes against gays people in Brazil are committed by their own partners, or are related to drugs or prostitution, such as the case with transvestites (usually both addicts and prostitutes). There is almost zero real homofobia in Brazil. In my whole life, I have never seen a gay person be bullied.  (VN: gays are a scape goat, the real issue is pedophilia and preparing the children for it)

On the other hand, we have seen several gay pedophile attacks (rapes and murders) on children, even by teachers inside schools. These are often neglected by the media and, when published, the journalist never writes the word homosexual.

Even this week, a large mall in a fashionable area in Sao Paulo had to put a security guard inside the bathroom, because gay men were having sex in public.

Their next move is to promote the "gay kit", a serie of DVDs produced by the government, showing explicit gay behavior in kids, to be shown to junior high students, in order to incentive the gay lifestyle. In the future, nothing will be impossible. Medical news, such as the recent study showing that gays have double the incidence of cancer, will be censored. Conservative blogs and religious radio and TV programs will be outlawed. (VN:  you better stop all this now while you still can, because if you don't, the time will come when you cannot rid your  country of these khazars,  DO IT NOW.  Look what Iceland did and now they are going better than anyone in the world. We did not and that is where you will end up,  just like us)

If you fire a lazy, incompetent gay employee, you will go to jail. If you don't hire a gay person, you go to jail. If you quote a Bible passage about homosexuality, you go to jail. If you complain about two guys making out in a restaurant in front of your kids, you go to jail (the law specifically says so). (VN:  oh, now,  Brazil has an SPLC and an ADL down there helping write their laws.  This is clearly a khazar tactic, someone in your government in Brazil is a dual Israeli citizen and in a position of power.   Find out who and kick them out early like we should have done and didn't, this explains it all..... the pervert satanic Khazars are in control in Brazil already)   The contents of this article would be enough to put me in jail. Society will be at mercy of a special caste, with special privileges. Even this week, a large mall in a fashionable area in Sao Paulo had to put a security guard inside the bathroom, because gay men were having sex in public.

The government, deeply involved in weekly corruption scandals in the order of billions of dollars, welcomes the distraction.

This law will make anal gay sex the most sacred, holy thing in Brazil. More than God, more than children. In the country, we have seen all kinds of desecration, such as images of Christ immersed in urine and even a gay man expelling a rosary from his rectum, in state-funded "art" events. This is considered self-expression.  (VN:  BE CAREFUL, BRAZIL, this is exactly how they started with the downfall of the United States, I recognize it well,  watch out also for increase in violence in TV, and in Ipod games and other electronic ways that parents never see. Take back control of your children.... .NO MTV, etc)


The international media has treated Brazil as the next wonder in the world, especially after the Marxists took over the country. Don't be deceived. Brazil is one of the leading countries in the march to the new world order and the total destruction of moral and family values, a place that will make North Korea look like the land of the free.