Vatic Note:  A very short note simply to say that after reading this, there should be no doubt in anyones mind who every nation on this planet should conduct a world war against.  Its clear as a bell.  That includes the USA joining all other nations to take down once and for all the Rothschild dynasty and their puppet country, Israel.  No doubt at all.   If not then this globe is in serious and terminal jeopardy.   Its up to the world now to locally take out every single rothschild owned facility and purge every single rothschild markets and banking executives from their country, or throw them in jail or both.  Thanks, Dick,  the khazars are truly psychopathic.  OH, forgot to tell Rothschild something;  "DO NOT MESS WITH THE MADRID FAULT OR YOU ARE SO TOAST, YOU HAVE NO IDEA".

Nuclear Plant Blast at Fukushima and mass contamination -- as prediced by RDR theory -- has occured. 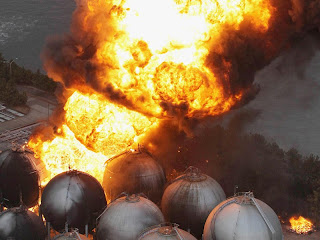 Watch now for another million-to-one shot of the second atomic power plant "going super-Chernobyl" on the nation that sided with Hitler during World War II and which pinned blame on Jewish Bankers" for Japan's economic meltdown of the 1990s.

The Port City of Fukushima, surrounded by dormant volcanoes, and a modern reactor with all of the best safeguards has, most improbably, is in danger of breaking down following a tailor-made super-quake and possible international sabotage of safety systems.

Over 50,000 of the living have been forced to evacuate -- but with major radioactive contamination there will be no place to go.

In two days Japan is a nation that can no longer shelter, warm or feed itself -- overwhelmed in an economy strained and depressed beyond description.

A much bigger crime than 9-11, the Japanese have been attacked as an example to all nations, as a warning to accept Rothschild victory over the nations of the earth or else. Intelligent and informed people know what has happened, the understand the message, and it is understood that the message will be transmitted by such people to reach all -- even as all media will ignore the overwhelming evidence for precisely planned tectonic warfare.

The horrific scenes of the tsunami covering the clean and neat modern buildings, the perfect straight and beautifully organized farm land in a wave leaving "instant Haiti" -- impresses the world mind as powerfully as the equally improbable and terrifying collapse of the World Trade Center towers of New York.

Japan has been the most civilized and most modern and most peace-loving and rational of all the nations of the earth for over 60 years. Japan has stood for the "modern" model of rising technological civilization. But this is the age of Rothschild (Zionist-Triad-Masonic; Trotsky-Zhou/Rockefeller-Rothschild) organized crime domination where intelligence and education and high technology and nationalism is no longer permitted and where a mono-ethnic nation living without divide-and-conquer dialectics of conflict -- the global mafia's primary means of remaining dominant over other races must be degraded and broken up.

The disaster comes at a time when the worlds energy resources and food resources have been diminished to effect the overthrow of representative governments and nationalism around the world. The loss of so much energy generating power and the costs of reconstruction for which Japan will require IMF loans will exacerbate a situation where tens millions of lives are already in danger.

It is doubtful whether the unorganized populations will comprehend and organize against this flexing of the muscle of world domination by Rothschild world power. (No world government can take control without an absolute demonstration of the power of that world government to coerce absolute submission or face national obliteration.

Now go read the details of death and destruction -- as mother nature is blamed for this great crime against the leading nation of reason and harmony -- by the ancient rivals China -- the Chinese Communists never forget that Japan tried to set up an East Asian co-prosperity zone free of Occidental Imperialism in WWII (and many Chinese after living under Chinese communism have wondered if they would have been much better off under the Japanese than under the Jew-allied Communist dictatorship of "Red China."

Japan was not divided as was Germany -- under General MacArthur -- an old-right American conservative -- and with the able leadership of devised a "Peace Constitution" - built up Japan without a Marshall Plan -- The job of writing MacArthur's "model constitution" to replace the Meiji constitution fell to the Government Section of his General Headquarters.

MacArthur aimed for a strong centralized nationalist/paternalistic but pacifistic and non-chauvinistic government seeking the prosperity through the American model of the conservative business with a dash of "Huey Longish" wealth-sharing -- a system very well realized under Prime Ministers Yoshida Shigeru, Hatoyamna Ichiro, Ikeda Hayato Paternalism for the betterment of its people -- although big corporations -- they were big-family corporations with co-existing union power etc.

The Japanese made it work -- as Americans failed to make these very same ideals work. All that came after Hiroshima-Nagasaki. Japan will not be so fortunate with the IMF and Rothschild "globalist" reconstruction occupation as it was under the MacArthur occupation. Japan is in dire need now -- and all aid will have strings. A new order is now supreme in Japan. The Jews are in control.

That is how I see it.

hav you seen any info of anyone going to kill haarp before it blows NewMadridFault ?
http://www.youtube.com/watch?v=TuYJ76t8hkc

One at a time and target specific.... thats how. As far as the Haarp being taken out before the madrid fault, well, I believe that might happen.