By Dr. Ghayur Ayub in Opinion Maker
I made sure to buy The Guardian – one of five newspapers publishing the documents. With remote control in hand, I was browsing through Sky News, BBC, CNN, Al-Jazeera and Press TV. To the best of my recollection, it was Sky News which caught my eye. The breaking news referred to a planned Israeli nuclear attack on two American cities, which were to be linked to Pakistan. America would have had a cause to respond in kind and take out Pakistani nuclear sites. I couldn’t believe my eyes! I rewound the news to double check what I had just read. Thinking details would be published in the Guardian newspaper the following day I did not record it. Later, I rang a friend and told him about the mind boggling news. The bizarre news kept me awake most of the night.

The next day I got the newspaper and went through it page by page. To my surprise, the “ticker news” could not be seen anywhere. I read it a couple of times but failed to find the particular piece. I could not understand how the newspaper missed such an important part of the leak? In pursuit, I opened the Wikileaks’ website and browsed through it carefully; no luck again. Then, I Googled relevant questions pertaining to Israel; still no luck! To make it more direct, I refined my search based on the information I had read on television. Again no reference. The news had just disappeared from cyberspace. Doubts started emerging whether I had really seen that segment which was embedded in my mind despite me vividly remembering its content. In fact I called a friend about it. So what happened to the news?
The only explanation I can think of is that the news item must have leaked out by mistake and then swiftly been retracted. After all it is common knowledge that the leaks are selective. I have no idea who else watched it during that brief period it was on the air. Was it a coincidence that at that very moment I was browsing through the channels? Many would say yes. But I don’t believe in coincidences. I call them part of ‘cosmic language’. All it means is that nature talks to us in its own language that has no syllabi. I may write on this subject some other time. But for now I had to find the ‘missing leak’. 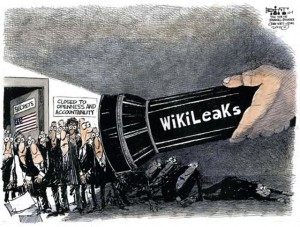 Email ThisBlogThis!Share to TwitterShare to FacebookShare to Pinterest
Labels: Wikileaks

The news bip, regarding an Israeli nuclear false flag on two US cities blaming Pakistan, fits what most people feel Israel is capable of.

Are there limits to what our military will tolerate regarding Israel? We shall see.

In 1919, the military tried to address the problem since the zionist khazars had just overthrown the russian government and killed the entire family.

Today, the US military is riddled with khazar traitors and they are satanizing the military which is bad for us and our children that we send to war. NO MORE SENDING ANY OF OUR CHILDREN TO WAR UNLESS WE WANT THEM SATANIZED AND BELIEVE ME, YOU DO NOT WANT THAT. Its worse than anything you can imagine. They will use your babies for ritual satanic abuse etc.

Do not count on the military anymore, they work for the bad guys. However, we are the new military and why the founding fathers created the volunteer militia. That is the people now become the army. We are certainly armed sufficiently to do so.