Assange Admits Wikileaks a Fraud Run by Press for Israel

Vatic Note:   This is  difficult situation that could have easily divided the "Truth" community, but may well unite us like never before once it becomes even more evident that Assange works for Israel and the international power brokers.  Anything touted and NOT IGNORED by the press serves their owners, the Zionist khazar rothschild intern'l bankers. Simple deductive reasoning could have shown us that, but many did not want to see, so it took it coming from his own mouth.

We are so desperate for any advantage that we grabbed on to Assange like a lifesaver and expected him to carry us to safety and salvation.  It just wasn't going to happen.   The reason the zionists do this is to continually instill a kind of Bi-Polar condition in the people, that eventually results in a form of mass depression.  The ups and downs of the battle, where you lose everytime, eventually results in apathy and reduces the risk of the population fighting back.  Just look at the Pals.   Everytime they try to do ANYTHING for themselves,  the Israeli's prove to them they are not in control of their lives and eventually they give up and stop fighting back.   Its brilliant actually and with this Assange thing its starting to work on us the same way it works now on the pals.

Assange Admits Wikileaks a Fraud Run by Press for Israel

CHUTZPAH: PROMISES TO STOP WORKING FOR ISRAEL
“FOOL ME ONCE, SHAME ON YOU, FOOL ME TWICE….” 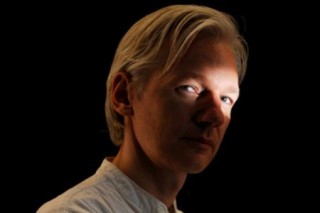 Today, Julian Assange admitted that Wikileak material had been chosen by the press, not an independent organization after all. Wikileaks, in effect, admitted that it has always been a front for what Helen Thomas refers to as the Zionist controlled media. Assange, in a childish attempt at “spin” blamed the press for having too many “sensitivities ” to Israel and making Wikileaks look bad.            HELLO!

The only reason we needed Wikileaks in the first place is that the press failed so utterly. Is it any secret that Assange turned total control of Wikileaks over to the press, the people who gave him “rock star” status? How utterly sick.

Now Assange is telling us he has 3700 cables from the US Embassy in Tel Aviv, documents covering an Israeli assassination and the tail kicking they got when they last invaded Lebanon. Anyone who thinks they can expect to hear the embassy communications outlining American outrage at Israeli actions will die waiting. Expect the same “media sensitivities” we have seen all along.

By “media sensitivities” we are simply saying that Israel controls Wikileaks and uses it to bash their enemies, the United States and their neighbors, some we now learn have been their friends all along.

Wikileaks had promised the press thousands of documents about a “UFO War over the Southern Ocean.” I couldn’t wait for this one. Instead, seemingly clever Julian Assange in his most apologetic manner is now telling us that he has sinned. Where did the mysterious UFO story go? Who told you to withhold it? Are we sitting on that story because President Obama is now drumbeating for war with Iran full time?

WIKILEAKS ADMITS TO BEING A FRAUD

He let the press control Wikileaks.

Julian, if we wanted to read the New York Times, we would go out and get one. Now you are telling us that the Times, a worthless rag of a newspaper, has been running Wikileaks all along? Do you know what “fraud” means?

If we wanted to hear what Israel wanted us to hear, we simply would have turned on our televisions. We have had nothing else for decades. Now you admit you have been a part of it. Are we supposed to be surprised?

You weren’t that hard to figure out. Every day, a new photograph in hundreds of newspapers, always posed, always thoughtful. You spend 9 days waiting for bail and we find out that you have been working for the press, working for Israel, working for the most powerful and devious forces known to mankind all along? You needed 240,000 pounds for bail? This wouldn’t be a one month retainer for your lawyer or publicists. The people you work for use money like that for lighting cigars.

We know it was all an act, just like this is part of that act, more drama brought on because some of us caught you early on and have “outed” you. What I find amazing is your chutzpah. You admit to using us all, defrauding us, being a disinformation agent.

Now you are taking a second shot at deceiving us all. What we expect is the same press that you are now accusing, now supposedly “distancing” yourself from will be the lead on this new story. What we are going to get is the New York Times, the Guardian, der Spiegel, the same triumvirate of baloney, your partners in crime, spreading the same old Wikileaks chickenfeed mixed in with Israeli disinformation and leaks designed to hurt the US government and discredit your Islamic neighbors.

Yes, Julian. They are your Islamic neighbors. If you don’t have Israeli citizenship yet, you soon will. They need another comedian and that seems to be your only real talent. I do so love your choice of words.

What you call “sensitivities,” a word that undoubtedly came from a committee of advisors juggling emails between New York and Tel Aviv is simply lying and cheating to the rest of us. You lied to us all, not once but continually and now you think we are going to take more of your lies simply because they are delivered with a half hearted apology?


The article is reproduced in accordance with Section 107 of title 17 of the Copyright Law of the United States relating to fair-use and is for the purposes of criticism, comment, news reporting, teaching, scholarship, and research.
Posted by Vatic at 2:15 AM