Schwarzenegger, Murdoch Give Keynote Speeches At The Bohemian Grove

Vatic Note:   This is up simply to give you a unforgetable view of who we will be dealing with in the future with their Satanic agenda planned for our future. (DO TAKE THE TIME TO WATCH THE VIDEO AT THE END OF THE PIECE, IT SUPPORTS WHAT WE PUT UP HERE ABOUT MOLECH AND THE BOHEMIAN GROVE)  What surprised me about this video presentation is Alex found out that the europeans have groves over in europe where they do this in Germany and then once a year come to the US for the ritual and where global policy is decided in secret, same as the Bilderberg meetings.

Remember also the 13 families are long term generational practitioners of this and the Israeli's were also worshippers even as God, in the Bible forbade them to worship Molech, mentioned specifically which was unusual.   God apparently had a very unfavorable position on that particular child burning sacrificing god.

This piece was a result of attendees to this years Bohemian Grove gathering of Practicing satanists as we have all seen by their public hand signals on both the left and right.  We have exhibited that on here several times already and we intend to do one that encompasses the entire global leadership currently in power within their respective countries.   Its out in the open now.  Remember, we did a piece on a Satanist announcing "the age of Satan"  was coming upon us and soon they would all be out of the closet and in control sufficiently that they would no longer have to pretend.   Notice who the emerging big players are slated to be for those satanists,  Murdock for press and swartzenegger for future political movement.   Another foreign person to be president of the US, ya think?

Here they are at the grove doing their thing with Molech, the owl God.  Notice how this god and the goat god have similar structures such that the same hand signal can be used for both and both go back to satan.   The video also makes that point.  Alex showed that even Baal was included because its also horned.  Remember also, its actually a crime in this country for elected reps to meet privately such as this,  with non policy making reps of industry and foreign countries.   So technically they are committing a crime every time they do this.

Media mogul lectures on “the future of news” 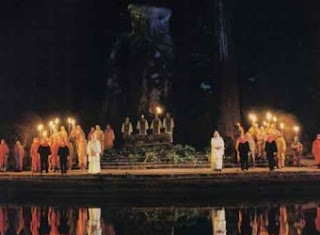 California Governor Arnold Schwarzenegger is to make a keynote address this evening before the Annual Bohemian Club secret gathering – a lifetime achievement for a man who has long been groomed for power by the globalist elite.

Schwarzenegger will speak in front of hundreds of movers and shakers at the 2,700-acre wooded encampment along the Russian River in Monte Rio.

The plutocrats will no doubt be eager to hear from the man that they hand picked to become California Governor in 2003, a fact that was reported in the San Francisco Chronicle at the time.

Schwarzenegger has since been a regular attendee at the Grove, but this will be the first time he has delivered a main event address at the elite hideout.

The news was reported as part of a puff piece on the grove in the Santa Rosa based Newspaper, The Press Democrat.

The article paints the Grove as some kind of fund-raising arts variety festival, when in reality it is the setting for top powerbrokers to knock their heads together on issues directly affecting world events, in between frolicking naked, urinating on giant Redwood trees and engaging in bizarre rituals.

The Manhattan Project was conceived at the Grove in the early 1940s, and Richard Nixon and Ronald Reagan met there in 1967 and agreed who would seek the presidency first.

In the past former British Prime Minister Tony Blair has attended the gathering, while in 2008 just months before the election, it was rumoured that both Barack Obama and John McCain attended.

In 2000 Alex Jones infiltrated the encampment and caught exclusive video footage of a bizarre mock human sacrifice ritual, known as “the cremation of care”, under a 40 foot stone owl that the members refer to as Molech.

Attendees dress up like Klan members in hooded robes and perform druidic pagan ceremonies to mark the spectacular finale of the event.

A reader who got a summer job working at the Grove in 2005, Chris Jones, reported that he was regularly propositioned for sex by the old men attending the encampment and asked if he “slept around” and wanted to have some fun.

Jones was later sentenced to three years in jail by California authorities for simply showing a tape of his visit to minors.

The New York Times is the only mainstream news source to have covered the Grove this year, with the usual sardonic whitewash piece that ridicules anyone who has reservations or questions regarding the weird rituals that the robed attendees engage in:  “…the requisite summer-camp assembly of robed men, a 40-foot concrete owl, and a body burned in effigy (conspiracy theorists note: it is not a real body)… no, conspiracy theorists, the owl does not represent a demonic idol or any potato-chip concern.”

Oh I see, it’s not a real body, that’s perfectly normal then – after all, who doesn’t sneak out into the woods in a black robe and burn human effigies with their friends. every once in a while?

The piece also notes that some reporters have managed to sneak into the Grove in the past, and refers to Alex Jones’ infiltration in 2000:  “some returned with reports of drunken, gray-haired sophomores, while at least one saw evidence of the Trilateral Commission, the Illuminati and Beelzebub himself.”

It also revels in a lack of protesters outside this year’s gathering:

“For most of the last 30 years, protesters by the dozens and hundreds have agitated outside this dark-wooded lair… Yet the ritual on this day includes only one protester, bearded, lanky Brian Romanoff, 28, who has been working mostly alone since the two-week encampment began on July 16. He says he has adopted a nonconfrontational approach, better to spread the truth about the collapse of the World Trade Center buildings.”

The writer, Dan Barry, gives away his intentions when he refers to the fact that The Bohemian Club has appointed a public relations consultant, Sam Singer, who is clearly the source of the piece.

Another key note speaker at the Grove this year was Newscorp CEO Rupert Murdoch, who reportedly discussed “the future of news” earlier in the week, following revelations that his new paywall at the London Times has thus far resulted in dismal failure.

No doubt Murdoch had much to say about the rise of the alternative media and the blogosphere, and the threat to the elite monopoly on information that its exponential success constitutes.

Watch Alex Jones discuss the shocking footage he obtained during his 2000 infiltration of the Grove:

The footage was compiled as part of the films Order of Death & Dark Secrets Inside Bohemian Grove, which can be ordered on high quality Combo DVD at the Infowars store.