The Most Interesting Things on the Forbes Richest Americans List

Vatic Note:  Here’s the Top 10 on Forbes list with a chunck of them there who are in the "wallstreet brokerage industry"  surprise, surprise!  Take down the names and save the pictures. You never know when we might need them.   Now who are more dangerous to Americans. Some one coming after you with a gun where you have a fair chance of protecting yourself, or someone capable of stealing all you have including your children, using you for whatever purposes they desire since they will control your food and water which you need to live, where you have no chance since it was done by those you trusted for generations.. So, which way do you want this to really go??? This is why FDR had such a hate affair with men like these.
I just want to know why forbes does not put up that which is held by Rothschild who makes Gates look like a pauper, or Soros who makes Steve Ballmer and Paul Allen look like beggars, and "THE QUEEN OF ENGLAND" WITH A NET WORTH OF $33 TRILLION DOLLARS, who makes them all look like low middle class? That is what I really want to know. Wonder if Forbes will explain it to us? Then there are the entire illumanit bloodline families whose wealth like Rothschild is beyond the sky limits.... its why they don't want you to see it.... its truly obscene.

The Most Interesting Things on the Forbes Richest Americans List
http://beforeitsnews.com/story/187/186/The_Most_Interesting_Things_on_the_Forbes_Richest_Americans_List.html
Contributed by Wall Street Cheat Sheet (Reporter) , provided to vatic by Before its news on line
Thursday, September 23, 2010 8:59 (VN:  #5 are brothers and connected directly and heavily to 9-11) 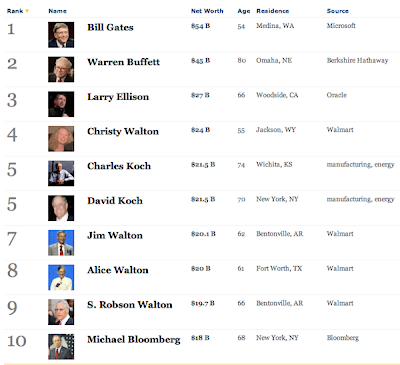 (VN:  and these are nothing compared to those that control them.)
By now, every tech blog in English has noted Facebook’s (FBOOK) Mark Zuckerberg is estimated to be richer than Apple’s (AAPL) Steve Jobs. But here are some more interesting things to note about the newest Forbes 400 Richest People in America:

40% = The percent of the Top 10 Richest Americans who got rich from the World’s biggest general store Walmart (WMT).

$84 Billion = The combined net worth of the Walmart winners in the Top 10.

24% = The percent of people who made their billions on Wall Street or as private investors.

Here’s the Top 10: (VN: Take down the names and save the pictures. You never know when we might need them.)