Could the Dutch Be Even More Bike-Friendly?

Could the Dutch Be Even More Bike-Friendly?

Amsterdam’s new “bike mayor” thinks so, and Anna Luten also wants her fellow cyclists to clean up their etiquette.

In Amsterdam, the bicycle rules. Free of fear and helmets, hordes of cyclists fill the streets at rush hour, using their numbers to dominate drivers and pedestrians. More trips in the Dutch capital are made by bike than by car, thanks to the city’s extensive web of cycling infrastructure. So ubiquitous are Amsterdam’s bicycles that they outnumber human beings.

And now, the two-wheelers have an elected leader. Anna Luten was selected as the city’s first “bike mayor” in late June by an online public vote and expert jury. Bike mayor is not an official position—the idea was initiated by a local advocacy group, CycleSpace, and the 28-year-old Luten will take on her volunteer duties on top of a day-job as a brand manager for Giant Bicycles. But the responsibilities are real: Luten will help mediate between city officials, urban planners, advocates, students, tourists, and Amsterdammers to address bike-related issues and take charge on improvements.

Does Europe’s most storied bike mecca really need another two-wheel advocate?  It turns out that success has bred a share of bike problems for Amsterdam. Bicycle parking is a too-rare commodity. Bike traffic jams clog streets and cut off pedestrians. Tourists arrive with little knowledge about how to navigate in cycling culture. And as Feargus O’Sullivan reported in April, the city’s commitment to cycling is “arguably a revolution just partly achieved,” with the majority of road space “still overwhelmingly allotted to cars.”

On Thursday, Luten told CityLab about some of the broad visions she hopes to realize as she assumes her new title. (Her words were edited and condensed for the sake of clarity.)

Reining in the “kings of the streets”

In Amsterdam we get on our bikes and we cycle everywhere. We go with the flow of traffic, we cross from left and right; that’s how we always commute. Cycling is almost too successful. Sometimes we have problems in the way we behave. Some Amsterdam citizens, they think they’re kings of streets when they’re on their bikes. We need to take a deeper look at how the gains [in cycling] have been made, and appreciate the infrastructure more. We need a deeper look at keeping it successful with more people and more bikes. 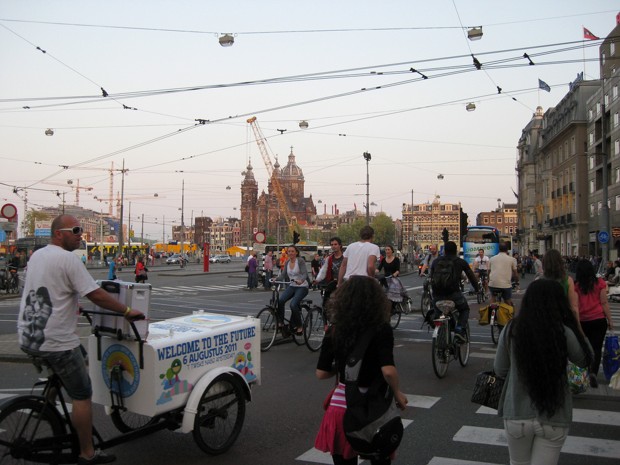 Making room for everyone

We have to think of new solutions about how to park your bike. Working in the cycling industry, I see that they’re making electric bikes. But as I’m working on infrastructure now, I see that the infrastructure is not good enough for those bikes—there’s no secure way to park an e-bike in front of my house now, as I do with a regular bike. We need to work on that. Why aren’t companies cooperating with each other?

I’m not against cars, but in the city center, there’s not much space right now for pedestrians, people riding bikes, or cars. On some streets, for those three next to each other, it’s just too narrow. Maybe we need a car-free road, one that’s only for cyclists. A system where we park cars outside the city center could also be good. The north of Amsterdam is transforming—they’re working on a train tunnel underground. But in the future, if we integrate more systems [such as bicycling and public transit] then we’ll have a bigger city. Because Amsterdam is so small.

Spreading the joy of cycling

When you teach kids how to ride a bike, you prepare a next generation. I think that’s something worldwide we need to work on. If parents allow their children to bike on their own, then the kids will know that it’s safe. I don’t remember my first day of school but I do remember the first day I went out on a bike by myself. It was an independence thing. For me, still, the bike is a way to explore new opportunities.

Research shows cycling is good for your health and makes you happy. It’s inexpensive and it’s good for the environment. It’s a friendly tool for mobility. That is [CycleSpace’s] vision, and that is what we want to share with rest of world. We want to invite delegations here to show them how they can work in their own cities to integrate bicycles, sharing the space between cars, bikes, electric bikes, and maybe even Segways, which we’re beginning to see more of in the Netherlands. Next June we’ll invite other bike mayors from around the world—including Cape Town, Johannesburg, Brussels—to the Netherlands to share their ideas. Because we don’t only have solutions here in Amsterdam. Other parts of world have them too. We can do better.

The article is reproduced in accordance with Section 107 of title 17 of the Copyright Law of the United States relating to fair-use and is for the purposes of criticism, comment, news reporting, teaching, scholarship, and research.
Posted by Vatic Clerk at 1:33 AM