Vatic Note: I just read that Hungary just burned all crops in Hungary that were GMO seeds. So Gates is lucky we  have not done that YET.  I do believe Europe is GMO free.  We need to be next.   They are lucky we are only marching and protesting, but you know what the next step should be?   Now these are things we should have done a long time ago, however, better late than never.   What Monsanto deals in, is death, organ damage, DNA manipulation,  toxic poisoning of our bodies,  sterilizing our young people in order to reduce the population, if not genocide them.  I could go on, but suffice it to say that such a march, if it results in millions showing up, is well worth the effort to show the powers that be, that mobilizing millions will be no problem, should we have to, in response to their treason against our nation.

Many have said they have done nothing because they cannot see how they could make a difference, since they are only one person.  Every person who thinks that way, could show up for their local protest against this khazar owned corporation, and do so in the millions and then you can see what one person can do, when joined with others who feel the same way.   Whatever little we can do, we should do or forever hold our tongues. No simpler way to put it.

If millions also show up for Kokesh's march on Wa DC, with armed gun owners carrying with open carry, than that sends the same message only much stronger.  Its time, and the sheep are truly waking up in record numbers, so its a perfect opportunity to tell the FDA, the USDA and the government as well, that we are genuinely fed up and we are not taking it anymore.  We have absolutely nothing to lose and they have everything to lose if they push this to the ultimate limit.

We actually owe the PTB a debt of gratitude and why is that?   Because the governments recent and on going assault actions against we, the people, has resulted in our learning that we are actually in a good position since we proved we do not NEED this or any government.  Not good for Governments at all, but great for us to realize "We are on our own, and we can succeed in proving how good that can be".  We are watching ad hoc governance in the organizing all these marches.  Imagine what we could do to the good, if we make up our minds to do so.  Enjoy the read.

Join the global March Against Monsanto on May 25th as 286 cities rise up against corporate evil
http://www.naturalnews.com/040232_March_Against_Monsanto_popular_revolt_cities.html
by Mike Adams, the Health Ranger,  on Natural News,  May 7, 2013 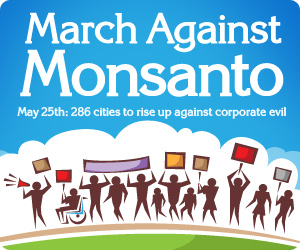 (NaturalNews) A popular revolt against corporate fascism is under way across the planet. Simultaneously spanning 286 cities across the planet, the March Against Monsanto on May 25th aims to spotlight the crimes against nature, farmers and food consumers currently being pursued by Monsanto, a company widely believed to be the "most evil corporation" on the planet.

Marches are already planned in hundreds of cities across the planet. Click here to find the march nearest you.

Or, if you wish, start your own March Against Monsanto in your local town. Click here to get started.

The official page of this event is:
http://occupy-monsanto.com/march-against-monsanto-may-25-2013/

And the Facebook page for the March Against Monsanto is found at:
http://www.facebook.com/MarchAgainstMonstanto?fref=ts

I will be joining the march in Austin, Texas to help voice opposition to the incredible evils being routinely carried out by Monsanto (working in conspiracy with the USDA).

For the record, this is a non-violent march so please do not bring pistols or rifles to the event. Please behave with civility so that your message is heard with credibility.

If the march is attacked by police, do your best to get it on film so that lawsuits can be filed against the municipal police departments who initiate such behavior. Any police officers who oppress or physically attack peaceful protesters will be publicly named and shamed across the internet.

Be warned that provocateurs will likely be hired to join the crowd and attempt to initiate violence in order to discredit all activists. DO NOT be suckered into anyone who approaches you and says something like, "Hey, we should throw smoke bombs into the capitol building" or other such nonsense. They are probably working for the FBI and trying to get you to commit felony crimes so they can crack down on the entire march. The FBI routinely plots false flag attacks across the USA in order to say it's "stopping terrorism."

This is how the real world works, folks. How do you think Monsanto got into a position of such power in the first place? Don't be naive. Be smart. Be peaceful but above all be heard. And don't be suckered into taking part in violence.


Learn more: http://www.naturalnews.com/040232_March_Against_Monsanto_popular_revolt_cities.html#ixzz2TLymUooo
The article is reproduced in accordance with Section 107 of title 17 of the Copyright Law of the United States relating to fair-use and is for the purposes of criticism, comment, news reporting, teaching, scholarship, and research.
Posted by Vatic Master at 2:00 AM

"If millions also show up for Kokesh's march on Wa DC, with armed gun owners carrying with open carry, than that sends the same message only much stronger."

Folks might just want to have a read from the well-reasoned contrary rationale they will find URL http://www.jimstonefreelance.com - a "RED ALERT" on that very topic by someone of high intelligence and deep insight into the manner in which the USDC Dirty Tricks Gang likes to play the Rest of Us.

Scroll down a bit and there she is, right there on the main page.

Decide for yourself on this one, Gentle Reader! YMMV and is free to do so at all times. But with their own Life, Liberty and Happiness having been placed squarely on the line by the flow of recent events, an Old Turtle (who is skilled in the Use of Arms from their decades of embroilment in the American nation's various Culture Wars) is obligated to utter Two Small Words in Latin: Caveat Emptor!"