Vatic Note:  After watching Hillary Clinton, scramble to libya, like a whore on a holiday, I decided to do more research on her for her present position.  If you remember correctly when Bill was President, it was Hillary that carried the water for the drug industry on her "universal healthcare" bill she tried to get set up and passed.   Well, guess who owns the drug companies???  Further, I came across this article from way back in 2010 and look who called Hillary right,  after we just read about her call to capture or "Kill" Ghadaffi. As usual, its the insightful, experienced and khazar hated Helen Thomas..... This is good, she calls Hillary a "hawk" which is being kind.   I would have used the fact that Hillary has two beaks, and thus a vampire instead, but I will defer to Helen on this topic.  LOL  Its worth the read and record this as  it maybe needed for future generations historical needs.   Like who are the real bad guys after all??? 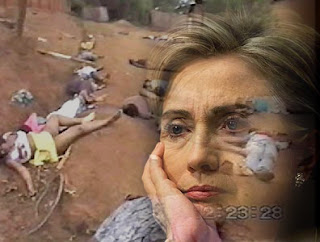 Secretary of State Hillary Clinton is finding her voice in the world of foreign affairs — and it’s the sound of hawk-speak, filled with threats and warnings.

She has warned that Iran is becoming a military dictatorship. She is trying — with some success — to persuade U.S. allies to support stronger sanctions against Teheran.

There’s no sign that the U.S. is about to invade Iran but there’s tons of speculation that the Pentagon has been tasked to figure out what bunker-buster bombs would do to Iran’s underground nuclear industry and whether such an attack would help or hinder efforts to neutralize Iran as a nuclear threat.

While a massive bombing would certainly delay Iran’s nuclear development, it would not stop it. The cost of such a military option would be grave: Iran’s hard-liners would be fortified politically; the growing domestic insurgency there would be silenced; and anti-American terrorists everywhere would see such an attack as justifying their own violence.

There’s not much doubt that Iran is heading toward nuclear weapons, the kind of arsenal that makes any nation a military force. Iran’s neighbors have those terrible devices and so the Iranians ask: Why not us, too? That’s the definition of an arms race.

On a recent trip to the Middle East, Clinton told students at Qatar University that Iran’s Revolutionary Guards have become more powerful than the government and are heavily involved in oil exports, gasoline imports and defense contracts.

Apparently, the hard-line mullahs were easier to deal with.

Clinton also was tough on the Palestinians during her tour in the region. She said the Palestinians — who have seen most of their land annexed or occupied by Israelis — have to make more “concessions” to the occupier to get peace talks going.

The word “peace” has not been exalted in the White House for years and neither President Obama nor his secretary of state seem to aspire to it. They fret that some conservative critic somewhere will accuse the administration of being “soft” on something.

Democrats continue to labor to prove they are tough, tough, tough, so that they don’t have to deal with a contemporary version of the old “Who lost China?” rant that conservatives used to their political advantage in the 1940s and 1950s.


The rhetoric from the Obama administration is framed in terms of “winning” and “victory” while a war-weary nation searches for an end to the war in Afghanistan, which has been going on for nine years and is gaining new momentum in the form of thousands of additional American troops being sent there.


On the Israeli-Palestinian front, former Sen. George Mitchell has been shuttling back and forth with not much success in trying to bring leaders from both sides to the peace table. Obama was not much help in breaking the stalemate when he buckled to Israeli Prime Minister Binyamin Netanyahu’s refusal to impose a total freeze on settlement building. Instead, the Israeli leader offered a 10-month halt in expanding settlements. Such settlements — colonies in reality — are illegal under international law.


Unlike his domestic proposals where the president faces so much Republican opposition, Obama is in sync with the GOP in treading along the belligerent footsteps of his predecessor.

His hawkish secretary of state takes her cues from the boss.  (VN:  Yeah,  Netanyahu)


The article is reproduced in accordance with Section 107 of title 17 of the Copyright Law of the United States relating to fair-use and is for the purposes of criticism, comment, news reporting, teaching, scholarship, and research.
Posted by Vatic at 5:00 AM

Not too often do I laugh reading the Vatic blog, but today,
I started out with a giggle.

We have to keep in mind, all along Billary has been puppeteered too. Some say Kissinger and I believe it. See mind control victims...
Brice Taylor, author “Thanks for the Memories: The Memoirs of Bob Hope's and Henry Kissinger's Mind-Controlled Sex Slave” - She is on video naming names.

There is this photo, I wish I could find it, where Hill is standing, robotic like (maybe in her blue pantsuit LOL) and Kissinger has a body stance as if instructing her... There are a ton of photos of Kissinger and Billary, don't you wonder why he is always with her... Anyway, Billary isn't taking "cues" she is totally under control. I wish more people could understood this, but they might not unless they know Brice's (Susan Ford) story. Her story opens up how the world is run... Not all need teleprompters. *hint

You know, Anonymous, I know that but forgot. LOL Just did a big blog on that fact with respect to Obama and his twin.

I don't believe I have read anything on Hillary or Kissinger for probably 10 years now and ususally you run across something that triggers your memory, that reminds you and amazes you how you could forget such an important fact since Kissinger is the personification of Satan, but your post just did that. Its amazing how they can make you forget something as big a deal as Kissinger as handler for Billary by sanitizing all news of any, and I do mean any connection. Its definitely a legit excuse since even Cathy Obrien had to have an ex CIA man help her overcome her mind control conditioning.

Remember back when it was pretty neck in neck between Barack and Hillary? Both were summoned to the Bilderberg meeting. As soon as they came back, the nomination race was over. Hillary became Obama's SOS. Were they mind controlled triggered and given their instructions? You also just reminded me of the time in July 2009 when Kissinger went to Russia to talk with Putin and reassured him that the American people would be ".... under control by Sept 2009" and I asked "WHY KISSINGER AND NOT BILLARY?" and now it makes sense. Rockafeller uses Kissinger as "his" secretary of state since he thinks he is king, and thus instead of instructing her handlers to go, he sent the man who is the controller to make sure Putin understands and is handled.

Yup, wonder if Bill is the same? Its obvious that Bush Jr and Obama are. Good comment.

Only a few hours ago, I was thinking of the Bilderberg meeting you mentioned. I watched that race pretty carefully.
Google Trends indicated that there was far more interest in Obama than in Hillary, but that the "news" media focused far more attention on Hillary than Obama.
When I examined the vote count for the New Hampshire primaries, I found the same bias against Obama that there was against Ron Paul. Hillary was clearly the Establishment's pick. Remember her remark about what it would be like "when we win"? He was supposed to be her veep.
Obama's legitimate support proved to be so palpable that the Bilderbergers just about had to pick him over her. Both, though, are owned and operated by the other side.

AAR - if you remember correctly it was mostly Fox that spent time on Hillary, and MSNBC spent most of their time on Obama. It was the right and left of the liberal party. The powers that be knew that Bill Clinton and Hillary were not going to be considered ever again as President since he betrayed the democratic principles of the party and she tried to do socialized medicine and failed. Obama did not. He was the choice of the neocons (Khazar Israeli's) and Hillary was the elite of europes Bilderberg Choice and also Israel wanted her in State since that was going to be the key position in the assault on the Middle East that they wanted to do.

That is why they met with Bilderbergs to negotiate the final decision on who. But Obama was groomed and handled and mind controlled etc from early age for this at this time and its why they had to go forward with the agenda. They have on last gammit they plan on playing which is one world religion and Obama twins were essential to that part of the agenda. With the "resurrection" of the one, after the death of the other one, globalizing religion was to be the result. So that is why it was always going to be Obama and I said that in the very beginning of their campaigns. Zbig was Obama's main foreign policy advisor and that is always who was going to win. Its history. Carter, Reagan, Bush etc, etc.

Collective Greed??? ahahhahahaaa, of all people to be even mentioning collective greed, the Pope is the last person on earth to be doing so, with his various scamming banks, money laundering and pedophilia.... I have to go with the Lord on this one and just simply call him a "hypocrite" just like the pharisees were.

What a joke. He is a khazar plant that infiltrated the church and made it to the top with arm twisting. There is as much corruption in the Vatican as there is in London and Windsor palace. lol Oh, and in Israel.

Ha! I love this! From the first time I saw "Hillbilly" over a decade ago the hairs on my neck stood up. Only looking at a photo of Richard Ramirez has had that same effect on me. Then they were in office. I was so happy when they left only to have to suffer through yet more of the Hillbilly show present day. I wish they would just go away for good!