Vatic Note:  That is not the only fraudulent thing WaMu has done.   They take student loan payments for years,  and never record they have been paid, and then wait past the time accepted for keeping your records to prove you paid them,  then they turn it into the Student loan gov guarantee services and get paid for an unpaid student loan.   Then the government comes after the student who paid years ago but now dumped the records from the 15 years ago when it was paid off..... and thus cannot prove they paid them.  They and DSC are crooks.  I would be happy to go to court and so prove they are crooks, becuase it happened to me.  I hope they all go down.... I will celebrate.  Remember, Seattle is also where the vaccine depopulation advocate lives, Bill Gates.  The town is full of cretins like this.... amazing psychopaths with no conscience. 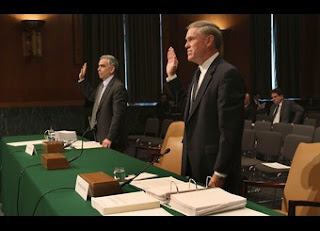 The Federal Deposit Insurance Corp. filed suit against former executives of Washington Mutual, including former CEO Kerry Killinger, former President Steve Rotella, and their wives, in a case that seeks to recover unspecified damages at trial.

The suit, filed in the U.S. District Court in Western Washington, also seeks to freeze the estates of the Killingers and Rotellas. It also names David Schneider, the former head of WaMu's home loans division, who now works at JPMorgan Chase.

Earlier, the FDIC said it would seek $1 billion in damages, but the amount wasn't specified in the suit.

In its 63-page complaint, the FDIC said that it’s suing the former, “highly-paid” WaMu executives to hold them responsible for losses in WaMu’s mortgage division. WaMu was closed by the federal Office of Thrift Supervision and its assets turned over to the FDIC in September 2008, marking the largest bank failure in U.S. history.

The complaint alleges that Killinger, Rotella and Schneider caused WaMu “to take extreme and historically unprecedented risks with WaMu’s held-for-investment home loans portfolio. They focused on short term gains to increase their own compensation, with reckless disregard for WaMu’s longer term safety and soundness.”

The executives and their attorneys could not immediately be reached for comment. In a statement, the FDIC said it files suits against former officers, directors and other professionals of failed institutions “when the case has merit and is expected to be cost effective.”

“This is done on behalf of creditors of the failed institution,” the FDIC said in its statement. “The FDIC investigates every failure to determine whether there is a solid basis for legal action and a sound source for recovery.”

The suit does not specify damages, although the FDIC previously said it would seek to recover up to $1 billion from all three former WaMu executives.

The suit also alleges that Killinger and his wife, Linda, sought to defraud WaMu’s creditors by transferring their multimillion-dollar home in Palm Beach, Calif., into two personal trusts in August of 2008, a month before the bank failed. Linda Killinger was appointed trustee of those accounts. Killinger also transferred half of the couple’s property in the Highlands area of Seattle into a trust in Linda Killinger’s name.

Both these actions were “made with actual intent to hinder, delay or defraud Kerry Killinger’s present and future creditors,” the FDIC suit alleges. The government agency notes that Killinger faced numerous lawsuits at the time, and WaMu had lost more than $9 billion in a bank run.

Similarily, the suit alleges that Rotella and his wife, Esther, transferred their house in Orient, N.Y., into two residential trusts in the spring of 2008, and Rotella also transferred $1 million to Esther Rotella after WaMu failed, according to the complaint. The suit alleges that “… the transfers were not disclosed to or were concealed from his present and future creditors.”