Vatic Note:   Even retired, she is continuing to speak truth to power.  What a gal.   I celebrate her honesty and truthfulness.   She is an American Hero and she is right.  The slander against arabs in this country is at historical levels unseen before and unjustifiably slanderous.  But then that is the Rothschild/Israel plan, to divide the nation like they did in Russia during their revolution and get us to hate and fight each other,  well, its not working, is it???  Helen is getting the recognition she deserves for her absolute courage to face truth and speak it.  I wish more of us were like that.   Thank Gawd for her and all the blogs that try to do the same thing.   Israel is not the problem, we are for letting them have their way as their deception is not only penetrable, but obvious once you wake up to it. 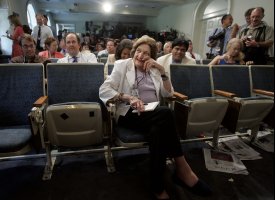 Striking a defiant tone, journalist Helen Thomas, 90, said today she absolutely stands by her controversial comments about Israel made earlier this year that led to her resignation. But she stoked additional controversy with new remarks, claiming that "Zionists" control U.S. foreign policy and other American institutions. The local Jewish community strongly condemned her remarks.

"I can call a president of the United States anything in the book but I can't touch Israel, which has Jewish-only roads in the West Bank," Thomas said. "No American would tolerate that -- white-only roads."

Thomas, who grew up in Detroit the daughter of Lebanese immigrants, was in Dearborn today for an Arab Detroit workshop on anti-Arab bias. The Free Press asked her about her comments, which critics have said were anti-Israel.

"I paid the price for that," said Thomas, a longtime White House correspondent. "But it was worth it, to speak the truth."

"The Zionists have to understand that's their country, too. Palestinians were there long before any European Zionists."

Thomas claimed that "You can not say anything (critical) about Israel in this country."

In a speech that drew a standing ovation, Thomas talked about "the whole question of money involved in politics."

"We are owned by propagandists against the Arabs. There's no question about that. Congress, the White House, and Hollywood, Wall Street, are owned by the Zionists. No question in my opinion. They put their money where there mouth is…We're being pushed into a wrong direction in every way." 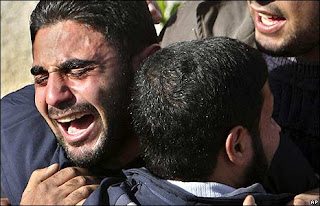 Jewish groups have criticized Thomas' earlier remarks, saying they were unfair and bigoted. And they slammed today's remarks as well.

"When she said…today that Congress, the White House, Hollywood and Wall Street are owned by Zionists, Ms. Thomas repeated the anti-Semitic stereotypes that have been used for more than a century to incite hatred of Jews. Her comments should be condemned by all people who oppose bigotry in any form," said Robert Cohen, executive director of the Jewish Community Relations Council of Metropolitan Detroit.

Don Cohen, a pro-Israel activist based in West Bloomfield, said Thomas was wrong when she said there are Jewish-only roads in the West Bank.

"This is false," Cohen said. "There are Israeli-only roads on which anyone with an Israeli license plate...can use...Jews and Arabs."

Asked by the Free Press how she would respond to those who say she's anti-Semitic, Thomas said:

"I'd say I'm a Semite, What are you talking about? Who are you?"

In her speech to about 300 inside a center in Dearborn, Thomas lashed out at the U.S. wars in Iraq and Afghanistan, saying they were built on lies. And she decried bias against Arabs.

"We all know the Arabs are much maligned. They are automatically terrorists. I was called the Hizballah at the White House, Hamas, and everything else. But I never bowed to those kinds of slurs because I know who I am. I'm an American."

Criticizing the wars in Iraq and Afghanistan, Thomas said "we've lost our way."

In the interview, she said the Iraq war was "a war built on lies." 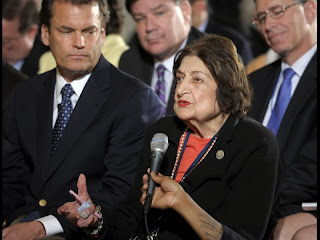 "Seven years of war now with Iraq. They did nothing to us. They are totally innocent, and they were just demonized. I'm not saying Saddam Hussein wasn't a terrible man. But how many thousands of Iraqis did you kill, for what reason?…They've never explained the war. No weapons of mass destruction. No ties to Al-Qaeda. What is this? Why are we killing those people. And why are we there?"

"We teach our children to be good citizens, never kill, never lie, never do bad things, and yet in 3-4 weeks, we train them to go and kill people half way around the world, and still have yet to give them a good reason to kill and die."

Thomas resigned from Hearst Newspapers in June after telling a rabbi on camera that Israelis should "get the hell out of Palestine" and "go home" to "Poland, Germany and America, and everywhere else."

She later apologized for her comments.

During her interview and speech, Thomas often used the term "Zionists" negatively, saying that Dennis Ross, President Obama's adviser to the Middle East, was a Zionist.

"Obama, he puts in charge for the Arab world a Zionist like Dennis Ross…You don't put a Zionist in charge of the Muslim world in the White House."

In the interview, Thomas talked about the problems that Palestinians face, saying that "Arabs are not terrorists."

Rather, Thomas said, it was former Israeli leader "Menacham Begin who created terrorism…they bragged, in his first book, about creating the modus operandi for terrorists."

In the interview before her speech, Thomas said she has fond memories of growing up in Detroit.

"I have a great, great feeling about Detroit, a warm feeling…Detroit is where my heart is. I love Detroit because we never could have won WWII without Detroit."

At the end of her speech, Thomas spoke about bias against Arabs and then recalled the words of a rabbi at Martin Luther King's 1963 civil rights march on Washington D.C., when he made his, I have a dream speech. Thomas said that the rabbi, who survived Nazi concentration camps, told the crowd "the greatest sin of all in the Nazi era was silence."

"And so we have to speak up for our rights, even at a price, even at a cost."

Tonight, Thomas attended the Arab American National Museum in Dearborn, where a bust of her was unveiled. And she is to speak at a high school in Dearborn on Friday.