Vatic Note:   I believe the caption below fully represents this article and how the pond scum made their money off the backs of retirees and hardworking little people.   But those days are rapidly coming to  an end.  We will simply create our own economy,  create and conduct our own banking and building our own underground world and civilization.  They can't kill us all off or where would they get those cattle slaves they are so desparately in need of.  Remember, these people barely ever have to tie their own shoes,  shop for anything, clean a dish, make a meal or even how to build anything.  They are the true useless feeders of our society.   Psychopaths without a slave work force is unthinkable to them.   So they have a problem, Houston.
Its their last big hurrah so I hope they spend it well, its the last they will ever get out of me.   I have already gone underground in earning my income.  What we have to do is be creative and have our employers cooperate in doing an underground economy.   Its what they did in Poland under the Russians and there was nothing they could do to stop it.

Imagine this.   We spend our money on NOTHING BUT LOCAL  products which would increase demand locally and new businesses or old businesses would adapt and we all decide we like our greenbacks and we use that to trade between each other and use it to pay for wages and the laborer uses that to pay locally for products.  We simply have to get creative  and we will.   For instance,  does anyone know how to make INK and if you do,  then you can then collect cartridges from waste, clean them up and fill them with ink you make and then sell them locally.   Easy.   Its just one example.  We are not helpless or stupid as they would like to think.   So, no more quarterly trillion dollar profits and billion dollar bonuses.  Sorry,  the slaves have done a no show to your system. 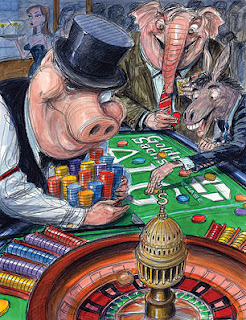 Goldman: "In practice, QE2 is likely to continue well beyond June 2011—at least well into 2012—if our forecasts for unemployment and inflation are close to the mark. We believe that purchases could ultimately cumulate to around $2 trillion...Under our longer-term projections it is easy to come up with models that show no tightening until 2015 or later."

In other news, the economy will not recover for the next five years, but under the Centrally Planned Feudal State of Bernanke, the economy is irrelevant. Incidentally, Zero Hedge now believes a $5 trillion QE3 program will be announced by July 2011, when gold is trading at $10,000, the entire Treasury curve is at zero, and stock prices are meaningless courtesy of a DXY sub 50, and every commodity opening limit up daily.

Goldman's prior observations which concluded that a $4 trillion QE is needed now, not in 2011, now, and not $2 trillion as CNBC keeps saying, can be found here.

Jan Hatzius' observations below presented without commentary. Watching this country implode in slow-motion courtesy of a few openly insane economists is self-explanatory.


Today’s statement by the Federal Open Market Committee (FOMC) shows a slightly slower-than-expected pace for the second round of quantitative easing (QE2), with purchases of “only” $75 billion per month. However, the committee made up for this potential disappointment by signaling a longer-than-expected time period of purchases, cumulating to $600 billion through June 2011.

In practice, QE2 is likely to continue well beyond June 2011—at least well into 2012—if our forecasts for unemployment and inflation are close to the mark. We believe that purchases could ultimately cumulate to around $2 trillion. Moreover, it is likely to take even longer—perhaps several years—before the FOMC starts to increase short-term interest rates, although the outcome as always will depend on the performance of the economy.

We see two main takeaways from today’s FOMC statement: 1. Large-scale asset purchases (LSAPs) are on a slightly slower-than-expected schedule, but will likely grow significantly over time.

In a widely anticipated move to provide more support to economic growth, the FOMC announced that it would purchase $600bn in Treasury securities by June 2011. This is over and above the amount that will be purchased as part of the program to reinvest repayments of principal on agency and MBS, which the committee expects to total $250bn-$300bn over the same period. Thus, overall purchases will be in the $850bn-$900bn range between now and mid-2011. Previously planned purchases for reinvestment will take place as scheduled on Nov 4 and 8, after which the two programs will be combined with the anticipated publication of a new purchase schedule on Nov 10 at 2pm.

While the headline figure for the new program is a bit higher than the $500bn that we and many others had expected, the time period is also longer (eight months instead of six), implying a monthly purchase rate of $75bn. We and others had thought that this figure would be about $100bn. If we focus on a measure such as the expected stock of Fed asset holdings at a 6-12 month horizon—consistent with our research showing that it is mainly stocks rather than flows of Fed purchases that matter for bond yields—these two surprises probably roughly cancel out.

We believe that the program will grow significantly beyond the initial $600 billion. Today’s statement says that the committee will "regularly review the pace of its securities purchases and the overall size of the asset-purchase program in light of incoming information and will adjust the program as needed to best foster maximum employment and price stability."

If our forecasts of a 10% unemployment rate and a further decline in core inflation to around 0.5% by late 2011 prove correct, we believe the committee will continue buying assets well beyond June 2011. At a minimum, we expect purchases into 2012 and still believe that they could ultimately cumulate to around $2 trillion. (See “QE2: How Much Is Needed?” US Economics Analyst, 10/42, October 22, 2010.)

2. The statement is consistent with our expectation that rates will stay near zero for a very long time, possibly several years.

One implication of the slightly longer time frame for QE2 is that, at the margin, the likelihood rate of hikes anytime soon has receded further. If Fed officials are committed to buying assets through June 2011, it is very hard to see how they would turn around a few months thereafter and start hiking the funds rate, barring a massive surprise in the economic data.

This is likely to warrant some additional adjustments in the expectations of many economic forecasters. Although the OIS curve has already removed any rate hike expectations from the 2011 outlook, the median economic forecast in the October Blue Chip Economic Indicators survey still has the first rate hike in the third quarter of 2011. This is likely to change in coming months.

How long will rates stay near zero? Of course, the answer depends on the economic outlook, but at least under our longer-term projections it is easy to come up with models that show no tightening until 2015 or later. (See “No Rush for the Exit,” Global Economics Paper No. 200, June 30, 2010.)

Fed officials will not commit themselves that far out. However, it is quite possible that senior members of the FOMC will provide further guidance about the short-term interest rate outlook in coming months to explain to market participants just how distant the prospect of interest rate hikes really is. This could take the form of a version of our Taylor rule or policy reaction function analysis, with a strong implication that even the current market expectation of rate hikes in 2012 may well prove premature.