Vatic Note: Well, my goodness. The other day I gave a link about a body washing up on shore at Plum Island  that was human, and had long long long fingers that were out of wack with normal fingers, ALL OF THEM, not just one or two as some sort of mutation, this was both hands and all fingers, there were no signs on how he died, and now this? We have been covering many articles about biology advances that we "know" about, not including what we don't know about. Genetic engineering, artificial cell creation from chemicals, and other animals to be used on humans, with no idea the impact on the human for doing so, cloning, trying to grow a brain in a lab environment, organic nano robots that can splice DNA inside a cell, they are that small, how are these creatures coming into existance?? Maybe this one is simply a freak of nature that is a result of other freaks of nature, but it brings home the question of the impact should we INTENTIONALLY do these things?  What monsters might we create and for what?  These people doing all this are completely out of control. How in the world did we ever allow this to happen without a public discussion as to whether we should be doing what we are doing???    If nature can create something like this, I can't imagine what evil PTB could create from their insane minds.   Even I am overwhelmed with what we don't know and find out only by accident. How much more is there???   What is really an important question is "Where are they heading with all of this that we linked above and will it be "good" for us??" If we don't find out before they get there, it maybe too late when we do find out.   I said it before and I will say it again, I think our DNA is under attack by these satanists.  Look what nature can do to DNA, imagine what intent can do to it.


Strange creature with warthog's mouth found in Canada
A strange creature has washed up on the shore of Hudson Bay in Canada with a mouth like that of a warthog, according to local reports. 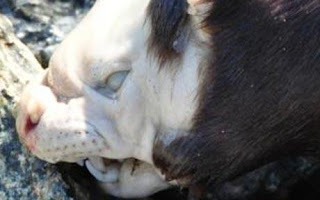 Photographs have been posted online appearing to show a foot-long creature with a large head, a mouth like a warthog and a rat-like tail.

It was found, reported the Toronto Sun, by a pair of dog walkers near the small community of Kitchenuhmaykoosib Inninuwug.

The dog pulled it from a creek on the bay, according to the paper.

Darryl Sainnawap, a local councillor, said he thought it was a rare animal which was found very sporadically.
He said a relative had found one in the 1950s.  "It's very rare. It lives in creeks and swampy areas and is said to feed on beavers," he told the paper.

"My great-uncle was told by his grandfather that a sighting of the omagimaakos is an omen that bad things will happen,” Sainnawap said.

“So we'll have to see about that."

Scientists wishing to authenticate the find will be disappointed to hear that the body of the creature has since been washed away. (VN:  how do they know someone didn't confiscate it, maybe to cover up the story or maybe as a curiosity, but they are stating it washed away as if they for certain know it as a fact, hmmm)


The article is reproduced in accordance with Section 107 of title 17 of the Copyright Law of the United States relating to fair-use and is for the purposes of criticism, comment, news reporting, teaching, scholarship, and research.
Posted by Vatic at 1:00 PM

Hi, Toree, strange is true and we have others on here, that appears to be half cow and half human. Very strange indeed. Are you on our subscription list for receiving our daily summary? Sign up if your not. Lots of good stuff for you.