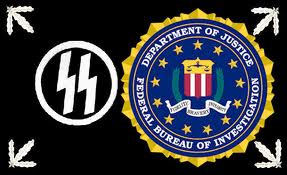 In 2010 the FBI invaded the homes of peace activists in several states and seized personal possessions in what the FBI–the lead orchestrator of fake “terrorist plots”–called an investigation of “activities concerning the material support of terrorism.”

Subpoenas were issued to compel antiwar protestors to testify before grand juries as prosecutors set about building their case that opposing Washington’s wars of aggression constitutes giving aid and comfort to terrorists. The purpose of the raids and grand jury subpoenas was to chill the anti-war movement into inaction.

Last week in one fell swoop the last two remaining critics of Washington/Tel Aviv imperialism were removed from the mainstream media. Judge Napolitano’s popular program, Freedom Watch, was cancelled by Fox TV, and Pat Buchanan was fired by MSNBC. Both pundits had wide followings and were appreciated for speaking frankly.


Many suspect that the Israel Lobby used its clout with TV advertisers to silence critics of the Israeli government’s efforts to lead Washington to war with Iran. Regardless, the point before us is that the voice of the mainstream media is now uniform. Americans hear one voice, one message, and the message is propaganda. Dissent is tolerated only on such issues as to whether employer-paid health benefits should pay for contraceptive devices. Constitutional rights have been replaced with rights to free condoms.

The western media demonizes those at whom Washington points a finger. The lies pour forth to justify Washington’s naked aggression: the Taliban are conflated with al Qaeda, Saddam Hussein has weapons of mass destruction, Gaddafi is a terrorist and, even worse, fortified his troops with Viagra in order to commit mass rape against Libyan women.

President Obama and members of Congress along with Tel Aviv continue to assert that Iran is making a nuclear weapon despite public contradiction by the US Secretary of Defense Leon Panetta and the CIA’s National Intelligence Estimate. According to news reports, Pentagon chief Leon Panetta told members of the House of Representatives on February 16 that “Tehran has not made a decision to proceed with developing a nuclear weapon.” http://www.denverpost.com/nationworld/ci_19978801?source=rss However, in Washington facts don’t count. Only the material interests of powerful interest groups matter.

At the moment the american Ministry of Truth is splitting its time between lying about Iran and lying about Syria. Recently, there were some explosions in far away Thailand, and the explosions were blamed on Iran. Last October the FBI announced that the bureau had uncovered an Iranian plot to pay a used car salesman to hire a Mexican drug gang to kill the Saudi Ambassador to the US. The White House idiot professed to believe the unbelievable plot and declared that he had “strong evidence,” but no evidence was ever released. The purpose for announcing the non-existent plot was to justify Obama’s sanctions, which amount to an embargo–an act of war–against Iran for developing nuclear energy.

As a signatory to the non-proliferation treaty, Iran has the right to develop nuclear energy. IAEA inspectors are permanently in Iran and report no diversion of nuclear material to a weapons program.

In other words, according to the reports of the International Atomic Energy Agency, the US National Intelligence Estimate, and the current Secretary of Defense, there is no evidence that Iran has nukes or is making nukes. Yet, Obama has placed illegal sanctions on Iran and continues to threaten Iran with military attack on the basis of an accusation that is contradicted by all known evidence.

How can such a thing happen? It can happen because there is no Helen Thomas, who also was eliminated by the Israel Lobby, to question, as a member of the White House press, President Obama why he placed war-like sanctions on Iran when his own CIA and his own Secretary of Defense, along with the IAEA, report that there is no basis for the sanctions.

The idea that the US is a democracy when it most definitely does not have a free watchdog press is laughable. But the media is not laughing. It is lying. Just like the government, every time the US mainstream media opens its mouth or writes one word, it is lying. Indeed, its corporate masters pay its employees to tell lies. That is their job. Tell the truth, and you are history like Buchanan and Napolitano and Helen Thomas.

What the Ministry of Truth calls “peaceful protesters brutalized by Assad’s military” are in fact rebels armed and financed by Washington. Washington has fomented a civil war. Washington claims its intention is to rescue the oppressed and abused Syrian people from Assad, just as Washington rescued the oppressed and abused Libyan people from Gaddafi. Today “liberated” Libya is a shell of its former self terrorized by clashing militias. Thanks to Obama, another country has been destroyed.

Reports of atrocities committed against Syrian civilians by the military could be true, but the reports come from the rebels who desire Western intervention to put them into power. Moreover, how would these civilian casualties differ from the ones inflicted on Bahraini civilians by the US supported Bahraini government, the military of which was fortified by Saudi Arabian troops? There is no outcry in the western press about Washington’s blind eye to civilian atrocities committed by its puppet states.

How do the Syrian atrocities, if they are real, differ from Washington’s atrocities in Afghanistan, Iraq, Pakistan, Yemen, Libya, Somalia, Abu Ghraib, Guantanamo prison, and secret CIA prison sites? Why is the american Ministry of Truth silent about these massive, unprecedented, violations of human rights?

Remember also the reports of Serbian atrocities in Kosovo that Washington and Germany used to justify NATO and US bombing of Serbian civilians, including the Chinese consulate, dismissed as another collateral damage. Now 13 years later, a prominent German TV program has revealed that the photographs that ignited the atrocity campaign were grossly misrepresented and were not photographs of atrocities committed by Serbs, but of Albanian separatists killed in a firefight between armed Albanians and Serbians. Serbian casualties were not shown. http://www.freenations.freeuk.com/news-2012-02-19.html

The problem that truth faces is that the western media continually lies. On the rare instances when the lies are corrected, it is always long after the event and, therefore, the crimes enabled by the media have been accomplished.

Washington set its puppet Arab League upon Syria in order to establish Syria’s isolation among its own kind, the better to attack Syria. Assad forestalled Washington’s set-up of Syria for destruction by calling a nationwide referendum on February 26 to establish a new constitution that would extend the prospect of rule beyond the Ba’athists (Assad’s party).

One might think that, if Washington and its Ministry of Truth really wanted democracy in Syria, Washington would get behind this gesture of good will by the ruling party and endorse the referendum. But Washington does not want a democratic Syrian government. Washington wants a puppet state. Washington’s response is that the dastardly Assad has outwitted Washington by taking steps toward Syrian democracy before Washington can obliterate Syria and install a puppet.

Assad was an eye doctor in England until his father died, and he was called back to head the troubled government. Washington and Tel Aviv have demonized Assad for refusing to be their puppet. Another sore point is the Russian naval base at Tartus. Washington is desperate to evict the Russians from their only Mediterranean base in order to make the Mediterranean an american lake. Washington, inculcated with neocon visions of world empire, wants its own mare nostrum.

China is a more difficult problem. Washington’s plan is to cut China off from independent sources of energy. China’s oil investment in eastern Libya is the reason
Gaddafi was overthrown, and oil is one of the main reasons that Washington has targeted Iran. China has large oil investments in Iran and gets 20% of its oil from Iran. Closing down Iran, or converting it into Washington’s puppet state, closes down 20% of the Chinese economy.

Russia and China are slow learners. However, when Washington and its NATO puppets abused the “no-fly” UN resolution concerning Libya and violated the UN resolution by turning it into armed military aggression against Libya’s armed forces, which had every right to put down a CIA sponsored rebellion, Russia and China finally got the message that Washington could not be trusted.

This time Russia and China did not fall into Washington’s trap. They vetoed the UN Security Council’s set-up of Syria for military attack. Now Washington and Tel Aviv (it is not always clear which is the puppet and which is the puppet master) have to decide whether to proceed in the face of Russian and Chinese opposition.

The risks for Washington have multiplied. If Washington proceeds, the information that is conveyed to Russia and China is that they are next in line after Iran. Therefore, Russia and China, both being well-armed with nuclear weapons, are likely to put their foot down more firmly at the line drawn over Iran. If the crazed warmongers in Washington and Tel Aviv, with veins running strong with hubris and arrogance, again override Russian and Chinese opposition, the risk of a dangerous confrontation rises.

Whose interests are being served by Washington’s endless and multi-trillion dollar wars? Certainly not the interests of the 50 million americans with no access to health care, nor the 1,500,000 american children who are homeless, living in cars, rundown motel rooms, tent cities, and the storm sewers under Las Vegas, while huge amounts of public funds are used to bail out banks and squandered in wars of hegemony. http://www.youtube.com/watch?v=suJCvkazrTc

The US has no independent print and TV media. It has presstitutes who are paid for the lies that they tell. The US government in its pursuit of its immoral aims has attained the status of the most corrupt government in human history. Yet Obama speaks as if Washington is the font of human morality.

The US government does not represent americans. It represents a few special interests and a foreign power. US citizens simply don’t count, and certainly Afghans, Iraqis, Libyans, Somalians, Yemenis, and Pakistanis don’t count. Washington regards truth, justice, and mercy as laughable values. Money, power, hegemony are all that count for Washington, the city upon the hill, the light unto nations, the example for the world.